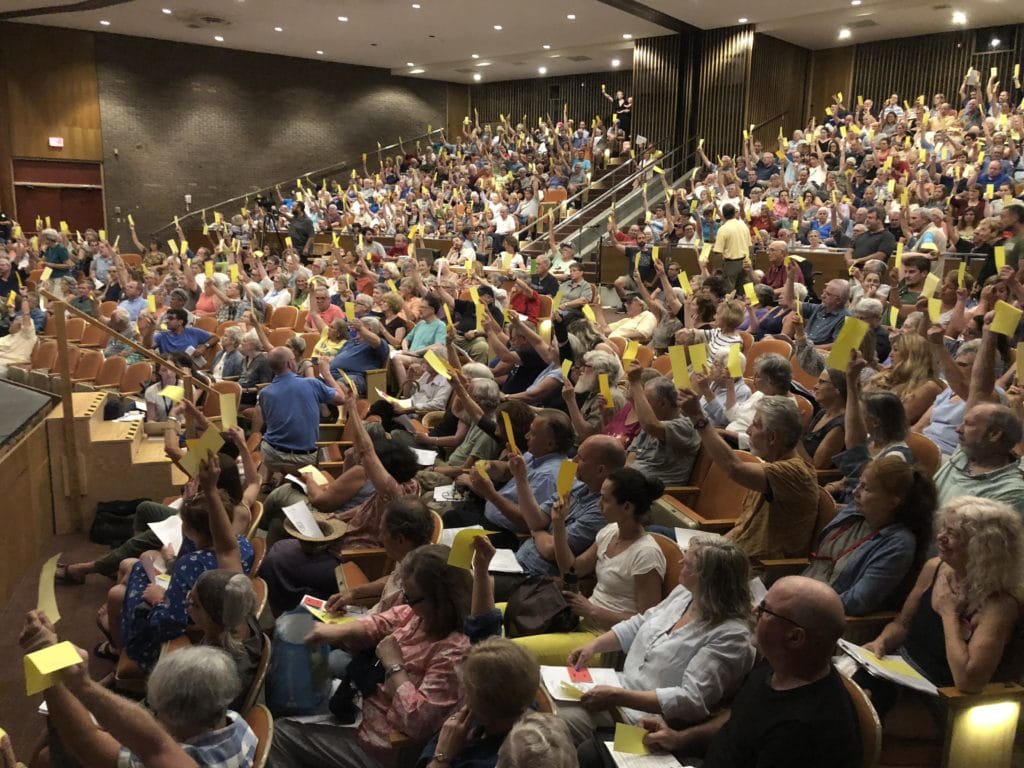 And of course, there are spending packages to approve as well. Click here to see the warrant and the 28 articles that will be up for a vote at the ATM Monday, May 6, at 6 p.m. at the Monument Mountain Regional High School auditorium.

By far the largest single spending item is the town’s contribution to the operations of the Berkshire Hills Regional School District. Click here for a report on the district’s $28.4 million spending plan, a rise of 4.26 percent from last year. Great Barrington’s proposed share is a little more than $16.7 million. Stockbridge and West Stockbridge are the other two member towns.

Minus the education side, the proposed town budget itself will rise from $11.37 million to $11.55 million, for an increase of only 1.6 percent. Scroll to page 19 of the warrant to see a breakdown of the spending plan and click here for a full Edge report.

Shorty after it passed at last year’s ATM, a bylaw prohibiting the sale of single-use plastic water bottles of one liter or less was targeted for repeal. A petition forced another town meeting to consider a repeal but it failed by almost 100 votes.

The ban remains in place but is not being enforced until details concerning water refilling stations and funding can be worked out. A subsequent petition was submitted to the town to consider yet another repeal effort. That item is on the ATM warrant.

There is an advisory resolution from the selectboard asking whether voters would like to place an undetermined limit on the number of cannabis retailers that can operate in Great Barrington. There is currently only one, Theory Wellness, but four others are in the licensing phase.

A cannabis edibles manufacturer, Superfine Edibles, is also proposed for Crissey Road, but will not be a retail operation. Most of the talk among members of the selectboard has been to limit the number of retailers to five, the same number that have either opened or been proposed.

There are several zoning bylaw amendments proposed. Click here to view all. Strike-thru font indicates the portion of the existing bylaws that have been deleted and underlined text denotes additions to the bylaws. Those revisions to the zoning code are recommended by both the planning board, which generated them, and the selectboard.

One amendment changes the size and composition of the design advisory committee and another revises the definition of an accessory dwelling unit to include so-called “tiny houses.”

Another proposed amendment to the bylaws allows for greater diversity of housing in certain zoning areas, including the so-called Downtown Mixed-Use B-3 District. But perhaps the most substantial proposed bylaw changes are focused on Stockbridge Road and South Main Street.

The amendment changes the uses permitted in the town’s business zones and to rezone parts of Stockbridge Road, the main commercial corridor north of downtown and one that is currently the site of several vacant storefronts.

Not all of the amendments Rembold and planning board chairperson Brandee Nelson presented to the selectboard will be on the warrant. The planning board agreed to strike some of them. Check the list Rembold provided to The Edge.

The petition, filed by town resident Tim Likarish, endorses the concept of renaming the middle school of the Berkshire Hills Regional School District after the legendary scholar and civil rights leader W.E.B. Du Bois, who was born and raised in Great Barrington. Click here to read an Edge story from when news of the controversial petition broke in February.

A similar proposal to rename the regional elementary school was floated some 15 years ago but it divided the community and took on a life of its own. In an incident that garnered much publicity, the Berkshire Hills Regional School Committee in 2004 declined to name after Du Bois one of the two new regional schools it had just built. The building was named instead after a small watercourse, the Muddy Brook, that runs behind the building on Monument Valley Road. The middle school across the street was named after the road.

The decision sparked outrage in the community, with one school committee member calling it a “media circus.” But, as the Du Bois Center’s website makes clear, “there are [or have been] at least five public schools named for Du Bois in multiple states, including California, Maryland, New York, North Carolina, and Ohio. His face and name twice appeared on United States postage stamps.”

The ATM will begin at 6 p.m. Monday, May 6. Only registered voters in Great Barrington are allowed to vote, though nonresidents may attend and they may speak at the discretion of town moderator Michael Wise. All voters are advised to arrive early to check in.