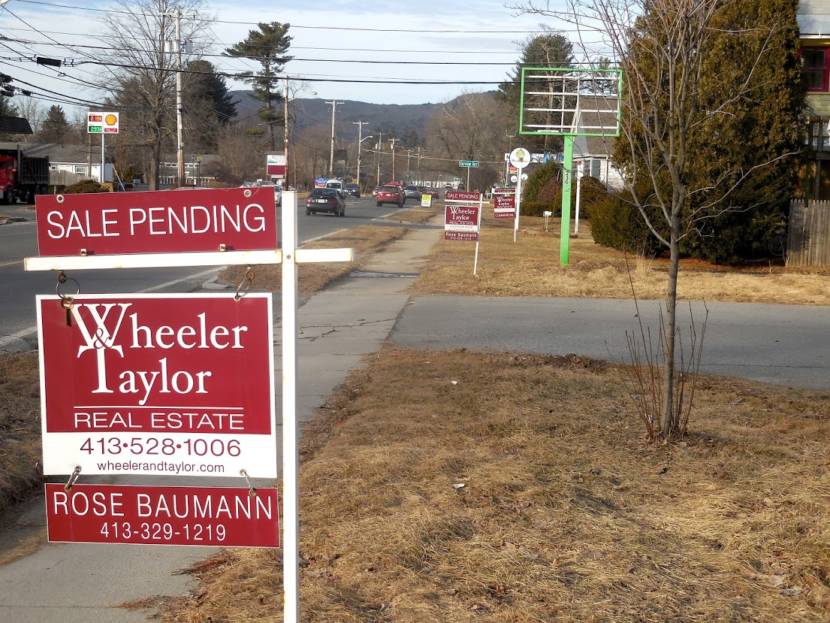 For sale signs line Stockbridge Road in Great Barrington, where planners would like to see more 'flexibility' in the zoning code. Photo: Terry Cowgill

Great Barrington — The ongoing saga of trying to perfect Great Barrington’s zoning bylaws will continue with a series of proposals, some of them potentially controversial, to be presented for voter approval at the annual town meeting in May.

Of particular in interest is a proposal from the planning board to change the uses permitted in one of the town’s business zones and to rezone parts of Stockbridge Road, the main commercial corridor north of downtown and one that is currently the site of several vacant storefronts.

Almost all of Stockbridge Road (also known as Route 7), from State Road (Belcher Square) to the intersection with Route 183, lies in a zoning designation known as B-2, which is general business and is also the designation for much of South Main Street. For an area lined with strip malls and commercial buildings, that sounds about right—except that there are actually plenty of private homes and shops with apartments upstairs.

See video below of town planner Chris Rembold and planning board Chair Brandee Nelson explaining the rationale for the proposed revision on Stockbridge Road:

The reality is that several businesses on that strip have closed in recent months, leading to the question of what replaces those businesses that have left and whether the current zoning is too restrictive to allow for a full range of replacements, including residential or mixed-use combinations.

An informal survey conducted early this week by The Edge found eight storefronts on Stockbridge Road that are either closed or closing, including the former Gans Bedding building, the former Sears appliance store and the building that housed Marty and Jim’s sandwich store.

The Edge has learned that both the Sears building and the former sandwich shop were purchased on Tuesday by Craig Barnum. The Sears will become the new home for Goodwill Industries, which will relocate in May to the new space as an anchor tenant. Barnum does not yet have a tenant or tenants for the sandwich shop building, which also has an apartment upstairs. Click here to see a story on that recent development.

Abutting the Sears to the south is a single-family home that is for sale as a “prime property” zoned for business. Next to the sandwich shop, Wonderful Things, a yarn and gift shop, was shuttered last year. Farther up the road, the Doughnut Shoppe closed recently. At the Barrington Plaza, the sprawling shopping center that is home to the Price Chopper and Marshalls, the former GNC and Lucky Nails storefronts are empty, even as part of the closed Kmart space is undergoing renovations to reopen as a Tractor Supply store.

“So we have places now on Stockbridge Road and on South Main that are still B-2, that are really commercially oriented,” Rembold explained, “but in uses, it’s really a mix of commercial and residential uses.”

So Rembold and the planning board proposed to change the size of the B-2 zone on Stockbridge Road. See the maps below:

As an example, one area in the B-2 zone, which was created in 1960, extends well behind the area of the Berkshire South Regional Community Center on Crissey Road all the way to the ridgeline of Three Mile Hill. That means that, theoretically, a developer could build a strip mall up there, though it’s unlikely, given the topography and lack of access. That portion of the B-2 zone would be changed to residential. Crissey Road itself is zoned industrial but the proposal calls for it to be rezoned as B-2.

“So we’d like to look at the uses that are allowed in the B-2, and the dimensional requirements and change some of those and also on Stockbridge Road itself,” Rembold said. “We’d like to rezone what is actually quite a large industrial zone, which isn’t used for industry anymore, and rezone that to all B-2.”

Selectman Dan Bailly said he was concerned about the implications the proposed changes would have on someone who wanted to start a business on Stockbridge Road. Bailly noted that 76 percent of the town’s tax base already comes from residential properties and he would not like to see it go any higher.

But Rembold assured him that the proposed changes would simply “clean-up” much of the existing bylaws and allow for more “flexibility.”

“We are proposing a wider variety of possible uses, so more residential or multifamily uses could occur by-right,” explained Rembold.

For further explanation, click here to read a letter from planning board Chair Brandee Nelson to the selectboard, along with the text of the proposed changes themselves. The selectmen unanimously voted to refer the proposed changes to the planning board for a public hearing. Nelson and Rembold urged the selectmen and members of the public to attend the hearing on Thursday, March 7, at 6 p.m. at the fire station on State Road.

As for the condition of the Stockbridge Road commercial corridor generally, Rembold suggested it could be a sign of the times—a “sort of a recognition that brick-and-mortar retail uses may not necessarily be a viable as they once were.”

There is a lot real estate on the market both north and south of downtown, so the planning board is pondering whether a wider array of permitted uses should be considered.

“The current zoning is pretty preferential for business, but it doesn’t really consider anything else—not very easily, anyway,” Rembold said.

Barnum told The Edge that business cycles vary greatly and are subject to “industry disruption from Amazon and others.”

He noted that some large retailers, including the troubled Kmart, which had a store in Barrington Plaza that closed in 2017, have been profoundly affected by that disruption. Others, such as Marshalls and Tractor Supply, have found a niche in brick-and-mortar retailing: The former has filled half the former Kmart space and the latter is renovating the other half of the Kmart space for a new store.

“Tractor Supply has so far circumvented Amazon’s business model,” Barnum said. “Goodwill is good in good economies and in bad ones, too.”

One need look no further than the Berkshire Mall in Lanesborough to witness firsthand the decline in brick-and-mortar retailing. The mall is a shell of its former self. Click here to see what’s left.

In the last few years, big-name anchor stores have left, including Sears, JCPenney, Macy’s and Best Buy. Target and Regal Cinemas remain, but those companies own their own spaces, have separate entrances and can remain open when the mall itself closes.

The mall owner often falls behind in property tax payments to the town of Lanesborough and the power seems to go out at random times. Only two kiosks remain open in the food court. In the winter, large sections of the mall’s sprawling parking lots are left unplowed.

Analysts blame not only competition from online retailers such as Amazon for the nationwide mall death spiral, but on the ongoing trend of Americans moving back to the downtowns.

“Fifteen years ago, it was Walmart,” Barnum said. “Now it’s Amazon. Ten years from now, who knows what it will be?”