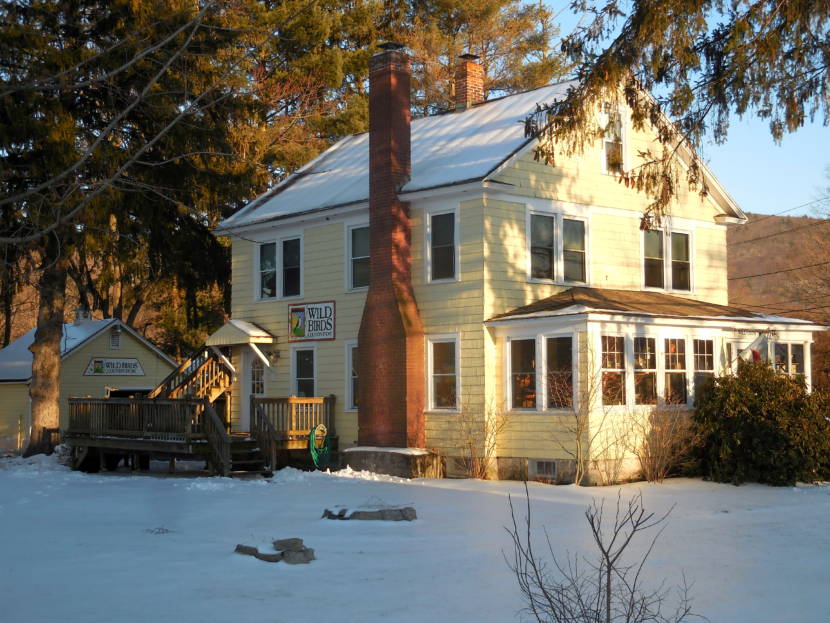 Community Growth Partners has signed an agreement to purchase the former Wild Birds building across from Guido's on South Main Street (U.S. Route 7) across from Guido's Fresh Marketplace in order to convert it into a marijuana dispensary, the fifth in Great Barrington, Massachusetts. Photo: Terry Cowgill

Great Barrington — A plan to create a fifth marijuana retail operation in Great Barrington is likely to start a conversation about how many is too many — and what role social justice should play in local marijuana businesses.

Charlotte Hanna, who owns Community Growth Partners, plans to open a retail cannabis operation at 783 South Main Street, in the former Wild Birds building next to the Great Barrington Bagel Company and across the street from Guido’s Fresh Marketplace. The company has signed an agreement to purchase the property, contingent on a successful host agreement with the town and appropriate licensing from the state Cannabis Control Commission(CCC).

That brings to five the number of shops that are either open or are planning to open in Great Barrington, a status that will likely make it the pot capital of South County. Community Growth Partners also has license applications pending for cultivation and retail operations in Northampton.

Hanna appeared before the selectboard on Monday night, Feb. 11, to explain her project and have her host agreement approved by the board. But the board was divided and only approved the agreement narrowly by a margin of 3-2.

“We really do need to have a greater discussion about many of these facilities we’re going to allow in our community,” said selectman Dan Bailly, who voted against the agreement and against the statewide ballot initiative that legalized recreational marijuana more than two years ago.

See video below of Community Growth Partners’ presentation to the selectboard, along with the board’s discussion of marijuana in the community:

“It’s not you,” Bailly continued, directing his remark at Hanna. “It’s the policy … at some point I think we’re just getting into this line that we kind of have to accept this, but … what kind of road are we going down? What are we saying to other types of businesses that we really want to come into town?”

Click here to see the host agreement, Hanna’s offer to purchase 783 South Main Street and information about Community Growth Partners and its team.

Selectboard member Kate Burke pointed to the social justice aspect of the legalization of marijuana. In the debate about legalization, many lawmakers across the country were “also talking about fixing a broken criminal justice system and reinvesting in poor and minority communities that have been battered by decades of the government’s war on drugs,” says Pew Research.

Indeed, the state Cannabis Control Commission has acknowledged in its regulations that poorer people and persons of color have historically been the subjects of drug enforcement policies far more often than the white and the wealthy.

Still, social justice advocates complain that the barrier to entry is too high. “It takes one million dollars at least to get your doors open in the current regulatory environment,” Tito Jackson, a former Boston city councilor who himself has entered the cannabis business, told attendees at a recent forum in Springfield.

Hanna “comes from a real estate development family that currently has 500,000 square feet of real estate under management,” according to biographical material she provided to the selectboard as part of the host agreement application.

Hanna also worked for 11 years at Goldman Sachs, the Wall Street investment banking titan. She was fired in 2008 and later sued Goldman for discrimination, alleging the firm put her on a “mommy track” and unjustly fired her while on maternity leave. The lawsuit was eventually settled on terms that were not disclosed.

An important piece of the bargain for towns when recreational cannabis was legalized was the badly needed revenue. Municipalities may charge a “local option” sales tax of up to 3 percent.

As an example, Theory Wellness, which opened as Berkshire County’s first medical cannabis dispensary in 2017, estimates its sales for recreational will generate between $200,000 and $300,000 per year, though the company has revised that figure upwards after seeing the volume of sales in shops that opened in November in Leicester and Northampton.

“There were goals of social equity and social justice and a lot of things being changed when marijuana was legalized and then the sale of marijuana started,” Burke said, adding that she did not think the state, and perhaps the town, were “holding up the other side of that bargain.”

Burke was also concerned that Community Growth Partners might be using Great Barrington as a “stepping stone” toward bigger things. Burke was further concerned that, with the number of out-of-state license plates seen at Theory, there will not be enough business to support five cannabis shops, which is the number Great Barrington could host if all goes according to plan. The possibility of diminishing demand could become a reality if, as has been reported, both New York and Connecticut legalize recreational marijuana soon.

“What’s going to happen when you’re not making as much money here?” Burke asked.

In a follow-up interview, Burke emphasized that she was speaking not for the board but for herself only. She noted that host agreements between marijuana retailers and the town of Great Barrington typically require the applicant to give preferences to hiring employees and contractors who reside in the town.

Burke would also like to see additional incentives built into the agreements, such as a preference in hiring given to those who have been through the criminal justice system as a result of marijuana-related crimes that have since been decriminalized.

And the host agreements in the town require the applicant to make a $10,000 annual charitable gift to a Great Barrington-based nonprofit service provider for “health/wellness and/or substance abuse education abuse programs.”

Like Bailly, Burke said she would like to see the town’s marijuana bylaws changed to limit the number of retail cannabis operators.

“We need a focus on local,” Burke said. “We’ve had plenty of local kids get arrested and their lives destroyed.”

Burke did not cite it as an example, but locally perhaps the most famous of these cases involved Kyle Sawin, who was one of 19 people accused of selling drugs to an undercover police officer in the Taconic Parking Lot behind Carr Hardware in Great Barrington in 2004. Because of the location’s within 1,000 feet of a church that had programs for children – in this case, the day-care facility in the basement of the Congregational Church across Main Street and not within sight of the location of the arrest — the teen faced harsher penalties if convicted.

Sawin’s first trial ended in a hung jury, so then-Berkshire district attorney David Capeless tried him again and Sawin was finally acquitted. Capeless’ opponent in his re-election bid in the fall of 2006, Judy Knight, who had represented Sawin, said Capeless and his drug task force entrapped him and “twice tied up the court with the Sawin case while letting other vital matters, including a time-sensitive rape case, sit on the back burner.” Capeless won re-election anyway.

Selectman Ed Abrahams reminded Burke that the current applicant for the host agreement, Community Growth Partners, has a background in social justice. Hanna’s biography says she started her career working in San Francisco with “other hunger relief advocates … developed farms on vacant urban lots and trained homeless people to run them and sell the produce to high-end restaurants.”

Hanna did not return a message seeking further comment for this article, but Burke said she admired the work Hanna has done. However, given the way the state’s cannabis system is structured, the high barrier to entry favors the wealthy.

“Ultimately, it costs so much money for people to start these businesses, that it’s just another way for rich people to make more money,” Burke said. “That’s not a great thing for a town that touts itself as progressive.”

As for Burke’s concern that Hanna’s company has higher aspirations, Hanna told her, “I guess if I weren’t committed to the community, then I wouldn’t be purchasing real estate. I would be leasing it. But I see this as a long-term play, and therefore I’m making a long-term commitment to put assets behind it. So I’m sorry you feel that way.”

Great Barrington is rapidly becoming the cannabis hub of South County. In addition to Theory Wellness, four other shops are planned. HighMinded LLC is in the licensing stage. The shop was originally planned for rented space in the so-called Flying Church on Main Street, but owners Adam Lippes and Alexander Farnsworth opted to buy their own place farther north at 126 Main Street, just beyond the Cumberland Farms in the former Dempsey Physical Therapy building.

Two brothers from Connecticut plan to open a shop at 82 Railroad Street, a former commercial kitchen. Calyx Berkshire Dispensary wants to open its first recreational store in downtown Great Barrington in the former Joe Dagget storefront at 307 Main St. Owner Donna Norman told the Edge the CCC is currently evaluating Calyx’s application and she is “hoping for a spring opening.” And farther south on Route 7 in the northern portion of Sheffield, The Pass has received a provisional license from the CCC, with plans to begin operations in May. The Pass will be housed in new construction that includes a cultivation facility at the rear of the property.