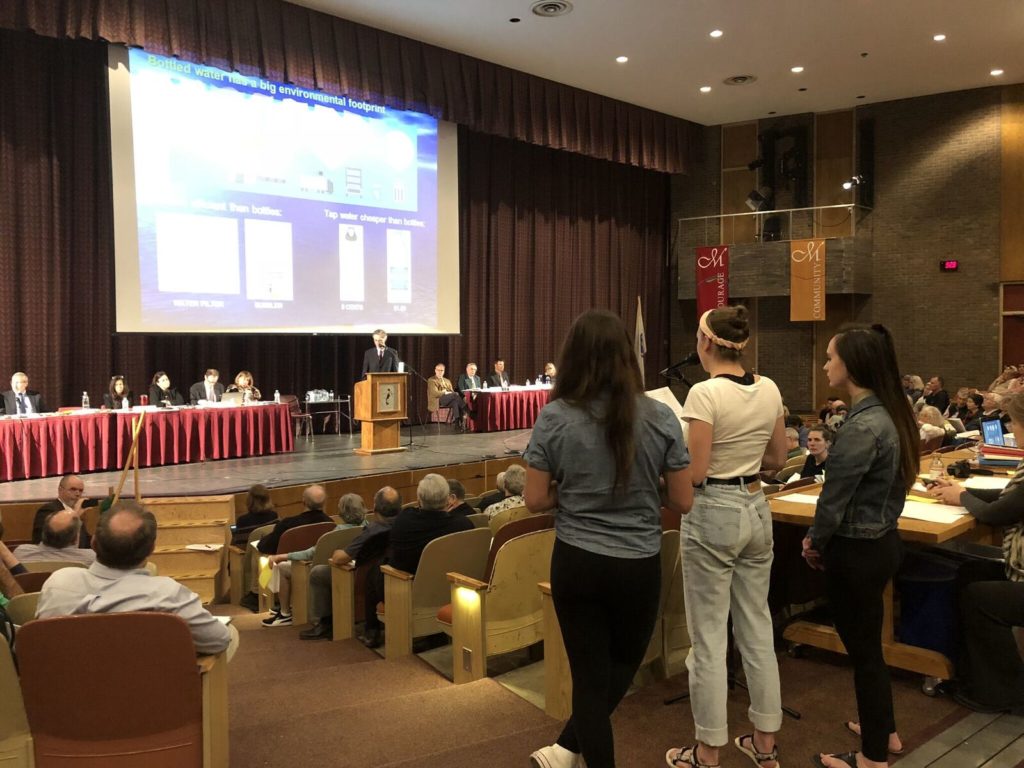 Editor’s note: information from town officials on the cost of a special town meeting has been added to this article.

Great Barrington — As promised, a petition to call a special town meeting to repeal the town’s recent ban on single-use plastic water bottles has been filed with the town clerk’s office.

Town clerk Marie Ryan confirmed today that she has received a petition with signatures from Great Barrington resident Laura Keefner, who had been active in opposing the bylaw after it was approved by voters at the May 7 annual town meeting.

“I’m glad I did it,” Keefner said in a brief interview. “I received a lot more support than I thought I would — by email, phone and Facebook.” Keefner added that she was harassed by some people on social media who accused her of a number of things she did not want to repeat.

But Keefner did repeat a number of talking points from a letter to the editor to The Edge that she wrote a couple of weeks after the ban was passed. “We were voted the best small town in America,” Keefner wrote, referring to the distinction awarded by Smithsonian Magazine in 2012. “Maybe, but you cannot buy water here.”

Keefner argued instead for enhanced recycling efforts and noted that youth athletic teams often sell bottled water at their games, which they could no longer do after the ban. And she also expressed concern that the ban would pit towns against each other because Great Barrington shoppers would have to travel and spend their money elsewhere for a product that is legal everywhere else in Berkshire County (three other towns in eastern Massachusetts have passed similar bans).

Keefner acknowledged that she did not attend the annual town meeting this year, in part because she was not aware of the proposed bylaw until a couple of days before the meeting. She assumed it would not pass and was later shocked to learn that it had.

Keefner considered trying to get it repealed next year, but ultimately decided she couldn’t wait that long. Other people she has since spoken to have said they thought the proposition would be on the ballot in November, not at the annual town meeting in May, Keefner said.

Ryan declined to release a copy of the petition because she is not authorized to do so until the signatures are certified and it is presented to the selectboard. She did not want to venture a guess as to when that would be. The board meets tomorrow to go into executive session to discuss pending litigation in a zoning dispute involving Gary J. O’Brien’s trucking company and residents of Roger Road. The petition is not on the agenda. The board’s next regularly scheduled meeting is Monday, July 9, at 7 p.m.

Ryan said Massachusetts General Law stipulates that the petition must have the certified signatures of 200 registered voters or of 20 percent of the total number of registered voters of the town, whichever number is less. The special town meeting must be held no later than 45 days after the selectboard receives the request. Ryan said Keefner’s petition required 200 signatures but the petition contained 337. Ryan will have to certify the signatures. In most petition efforts, a certain percentage of the signatures are disqualified on technicalities, so organizers are urged to collect far more than the minimum.

Opposition to the ban sprang up even before the measure was passed by a margin of approximately 2–1. The new bylaw effectively bans the sale of single-use plastic noncarbonated water bottles of one liter in size or less within the town limits of Great Barrington. It will take effect May 1, 2019.

John and Diane Tracy, who own Gorham & Norton, told the Edge they sell 30 cases a week of Poland Spring during the summer. Diane Tracy said this afternoon she had signed the petition but declined to comment further.

The approval from residents at the annual town meeting followed a lengthy and impassioned appeal from three Monument Mountain Regional High School students. They pointed to an array of research and data indicating the environmental issues associated with plastic in general, and the single-use water bottles in particular because of the chronic infiltration of microplastic debris into the food chain.

Asked for comment, the members of the environment committee of the Berkshire Women’s Action Group and Indivisible Berkshires, the panel that had sponsored the successful bylaw, issued the following statement:

We welcome this opportunity to further inform the public about the critical need for this bylaw, and we trust that the broad majority who favored this bylaw at Annual Town Meeting will again express their support at the Special Town Meeting. Here are the main issues.

First, the plastics-recycling markets have dried up. Since China closed its doors, the dollars we used to receive have turned into pennies. Even before that, a paltry percentage of plastic was actually recycled, and the rest went to landfills, incineration, and waterways.

Second, we are concerned about small merchants who might lose revenue. To this end, we propose that merchants install filtered water dispensers in their stores, and sell compostable cups and lids. A composting service, Natural Upcycling, will pick up compostable “plastics” for their industrial composting facility.

Third, we have focused specifically on water bottles because tap water is a healthy, cheap, and available alternative. In the future, we will expand our mission. In the meantime, we encourage others to tackle other single-use plastic products.

We look forward to working with merchants and town boards and staff to make a seamless transition to this bylaw. We hope the entire community will unite to make this bylaw something our town will be proud of.

On the issue of the cost to the town of a special town meeting, the Edge later received the following from Town Manager Jennifer Tabakin:

I am sending you an estimate for the cost of a special town meeting. Depending on if the Selectboard wishes to mail postcards and place legal advertisements, the cost would range between $2,580 to $4,005. There is not a legal requirement to do a mailing or run advertisements, so it can be determined by policy established by the Selectboard.

The Selectboard will set a date for the special town meeting at its next board meeting. They will also determine policy on the above line items. Please know these numbers are estimates based on prior expenditures. However, they are subject to change depending on the number of hours worked or items mailed etc.

Click here to see the spreadsheet itemizing the estimate.