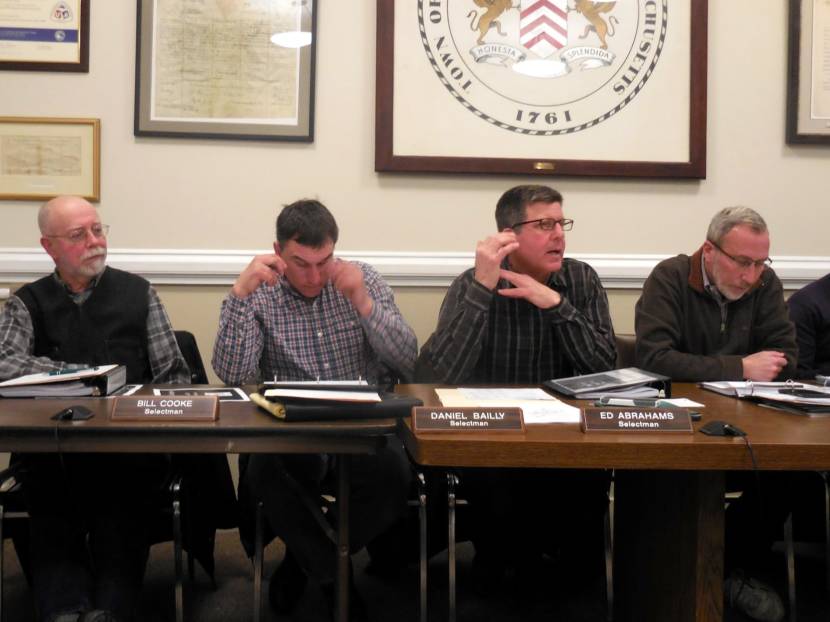 Great Barrington — For the first time in recent memory, both the town and school district budgets are mostly free of controversy and acrimony.

Click here to see the original draft town budget for fiscal year 2020 and here to see the budget projections after some revisions on Feb. 5. Further minor revisions were made after last night’s public hearing on the budget. Town accountant Susan Carmel said a complete revised spending plan will be up on the town’s website as soon as possible. In addition, the board approved 10 warrant items for the annual town meeting in May.

If approved at the annual town meeting Monday, May 6, the town operating budget will rise from a little more than $11.37 million to $11.55 million, for an increase of only 1.6 percent.

The town’s share of funding the Berkshire Hills Regional School District is expected to increase from $16.15 million to $16.73 million, or by 3.6 percent. That brings the total proposed town appropriation up to almost $28.3 million from last year’s $27.5 million, for an increase of 2.8 percent.

The Berkshire Hills school committee is expected to vote Thursday night to approve its own spending proposal of $26.2 million. The vote to approve it is almost a foregone conclusion after last week’s quiet and harmonious public hearing. Click here for a recap.

However, as is the case with the regional school district budget, keeping the increases down also comes at a price. In order to contain the tax levy and limit the spending increase to 1.6 percent, the town budget proposal calls for using almost $2 million from so-called “free cash,” or unrestricted funds held in reserve from the previous year.

The highest line in the operating budget is “public safety,” which is mostly the police and fire departments, at almost $2.5 million. Nipping at its heels for second place is the Department of Public Works at almost $2.3 million.

The largest increase in a major budget line is in the DPW’s public buildings line for $650,000 for “Housatonic School improvements.” Click here for a backgrounder from last week on that one.

Debt service will be at approximately $1.6 million, a slight decrease. Meanwhile, the spending plan also calls for setting aside $1 million from free cash for the establishment of a capital stabilization fund. In subsequent years, the town would commit $100,000 annually.

Members of the selectboard and finance committee, both of which unanimously approved the proposed town budget Monday night, thought the capital stabilization fund was a good idea, perhaps because the proposed capital budget this year is about $8.6 million, a whopping increase of 182 percent.

Much of the increase comes from the need for a major repair or replacement of the Division Street bridge, which is one of three spanning the Housatonic River that will need extensive work to the tune of approximately $11 million over the coming years. The lion’s share of this year’s capital budget will be financed through borrowing, town manager Jennifer Tabakin said.

“This is not an opportunity that comes around very often,” Tabakin said of the capital stabilization fund. “You may not have it another time.”

“I think this fund is an excellent idea,” added Pedro Pachano, a member of the planning board.

See the list of approved town-meeting warrant items below: 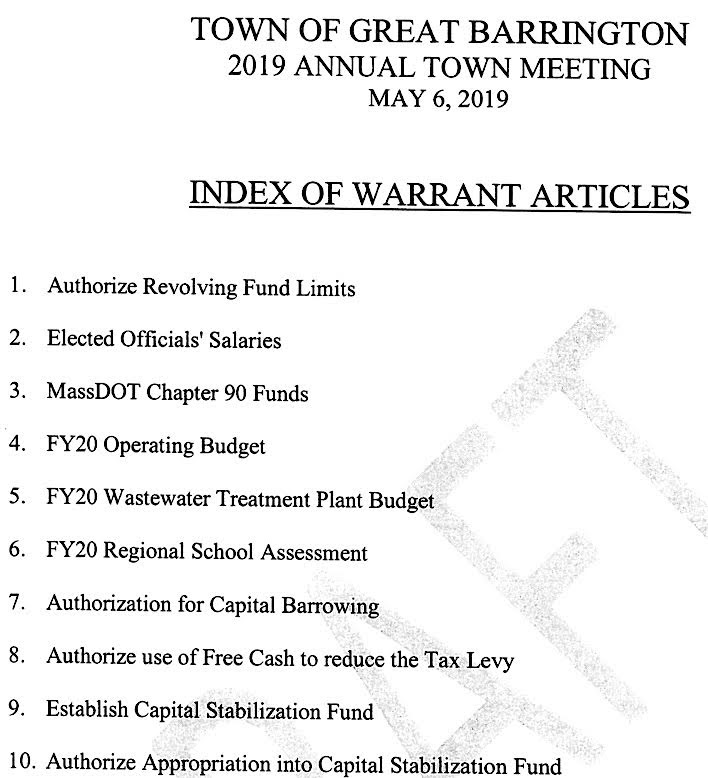 At least three other citizen petition items will be on the warrant. Two of them are from Railroad Street resident Steve Farina. One seeks to repeal last year’s single-use plastic-water bottle ban and the other seeks to revise two procedural matters governing the town meeting itself. See the text of the items below:

We the undersigned voters of Great Barrington hereby request that the following Article be added to the Warrant for the Annual Town Meeting of 2019:

That Town Code Chapter 135, Article II subsections 135-6 through 135-9 shall be repealed effective immediately upon an affirmative vote resulting in passage of this request. And, that the associated non-criminal disposition fine as specified in Chapter 1, General Provisions, § 1-5.1 shall be removed.

We the undersigned voters of Great Barrington hereby request that the following Article be added to the Warrant for the Annual Town Meeting of 2019:

That Town Code Chapter 41, Article I subsection 41-7 be modified to read:

No person, unless a registered voter of the Town, may address a Town Meeting without special permission of the Moderator.

A third petition, by Great Barrington resident Tim Likarish, is a nonbinding resolution to rename Monument Valley Regional Middle School after the legendary scholar and civil rights leader W. E. B. Du Bois, who was born and raised in Great Barrington. Any name change would have to be approved by the Berkshire Hills Regional School Committee.