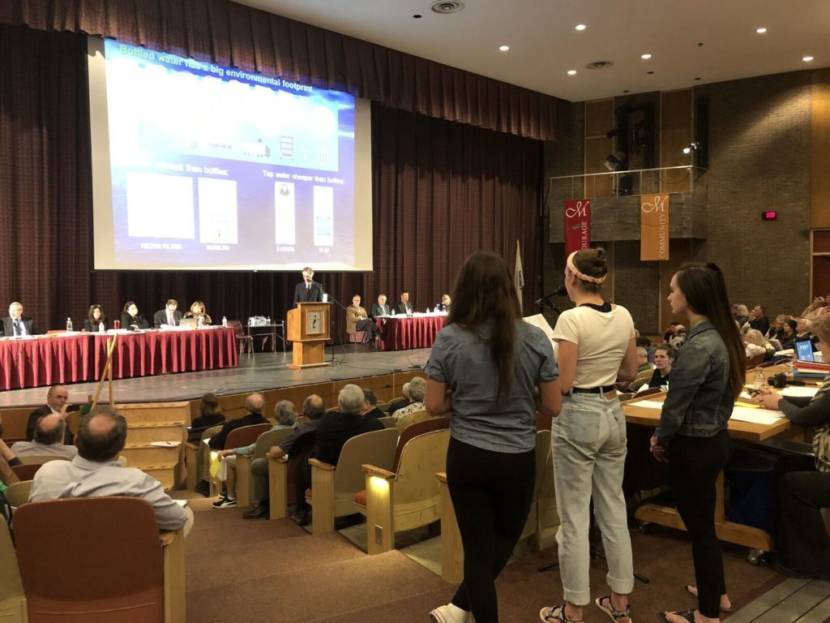 Great Barrington — After hearing of concerns about funding and education, the selectboard will postpone the enforcement of a controversial bylaw passed last year that bans the sale of smaller single-use plastic water bottles.

The bylaw technically took effect Jan. 1, but at Monday’s selectboard meeting, both opponents and supporters of the law indicated that all the details concerning water refilling stations and funding had not yet been worked out.

Indeed, selectboard Chairman Steve Bannon said he could not support enforcement of the bylaw until there is an implementation and funding plan for the series of water stations that are planned to help consumers refill the reusable bottles. The group supporting the bylaw had promised that taxpayer funds would not be used for the refilling stations.

“Before we do any enforcement, I want to make sure there’s a plan in place for implementation and funding for the water filling stations,” Bannon said. “For long-term costs and maintenance. Who’s responsible and what are the costs?”

In addition, there could be problems with installing and operating a refilling station in the village of Housatonic since the private water company serving the village has had a variety of problems over the years, most notably discolored water.

Bannon further added that he could not support the enforcement of the law unless there was a refilling station in Housatonic. His fellow selectmen supported him on all counts and passed his motion to that effect by a margin of 4–0. Selectman Bill Cooke was absent.

The original bylaw passed at the annual town meeting in May by a margin of approximately 2–1. Great Barrington joined Concord and Sudbury in enacting local bans. Opponents in Great Barrington, however, gathered signatures for a petition and successfully called for a special town meeting to repeal the measure. The vote to preserve the ban passed by almost 100 votes 297–199.

Town Hall intern Joe Grochmal gave a PowerPoint on the bylaw, its origins and relevant facts, some of which were disputed by a member of the audience. Grochmal’s presentation will be added here as soon as the town makes it available for upload. Meanwhile, for a refresher course, click here to read the text of the actual bylaw.

Bylaw opponent Steve Farina, who was prevented from speaking at the original town meeting because of a call to vote from a member of the audience, asked if town funds were going to be used for the marketing effort. Bannon told him yes.

See video below of the discussion of the plastic water bottle ban at Monday’s selectboard meeting:

Farina also offered a rough estimate of how much revenue and how many jobs would be lost to stores in town. He said that, by his calculation, the ban on single-use plastic water bottles would collectively cost the stores that currently sell them about $1 million per year in retail revenue and result in the loss of between 12 and 16 jobs.

Bannon disputed this but added that, in the end, it doesn’t really matter because the ban was actually enacted into law by voters at town meeting. Once the people have spoken, it is up to town officials to come up with a plan for implementation and enforcement.

Indeed, town manager Jennifer Tabakin clarified how the process works: “What happens after a bylaw is passed is the selectboard and town manager come up with an implementation plan. Then we have to enforce the law.”

The board cannot come up with an implementation and enforcement plan “in anticipation of the law getting passed,” Tabakin explained. She added that the process the town is following is much like what happened after the plastic shopping bag ban was adopted in 2013.

Indeed, though Tabakin did not cite it as an example, the process is much like what happens on the state level when certain ballot propositions pass. For example, the cultivation, sale and use of recreational cannabis-related products was legalized in Massachusetts through a 2016 ballot initiative. Implementation of the new law was left to the hastily created state Cannabis Control Commission. Sales began about two years later but only after the state had done a thorough job of regulating the industry and sweating the details with experts.

At Monday’s meeting, there was much confusion between when the law takes effect and when it would actually be enforced with tickets and fines. The law took effect Jan. 1 and was scheduled to be enforced May 1.

However, Tabakin explained that she is proposing to mount an educational campaign prior to “enforcing the regulations.” Tabakin, who is leaving her post at the end of June, said there will be “extensive outreach and communications in advance.” The plan is to commence enforcement in May 2020.

“We are simply not ready to enforce this in May [2019],” she said. So the law remains in effect but merchants and retailers will not get in trouble if they sell water in those bottles until enforcement commences.

Jenny Clark, a member of the Environment Committee of the Berkshire Women’s Action Group that gathered signatures a year ago to put the measure on last year’s annual town meeting warrant, said fundraising for the refilling stations is going well and that almost two dozen merchants have signed on to fill reusable water bottles for thirsty visitors on request through the GB On Tap program. Click here to see the list.

Planning on the stations began last summer after the move to repeal the ban failed. Clark’s colleague on the group, Wendy Kleinman, said she had personally donated $2,000 toward a water refilling station in Housatonic.

“I believe in this and I feel that Housatonic should have water,” Kleinman said.

Bannon reiterated his opposition to enforcing the ban if the town has to pay for the refilling stations. The only way the town should pay for it is if another town meeting is held and taxpayers approve the funds, Bannon said. His colleagues agreed.