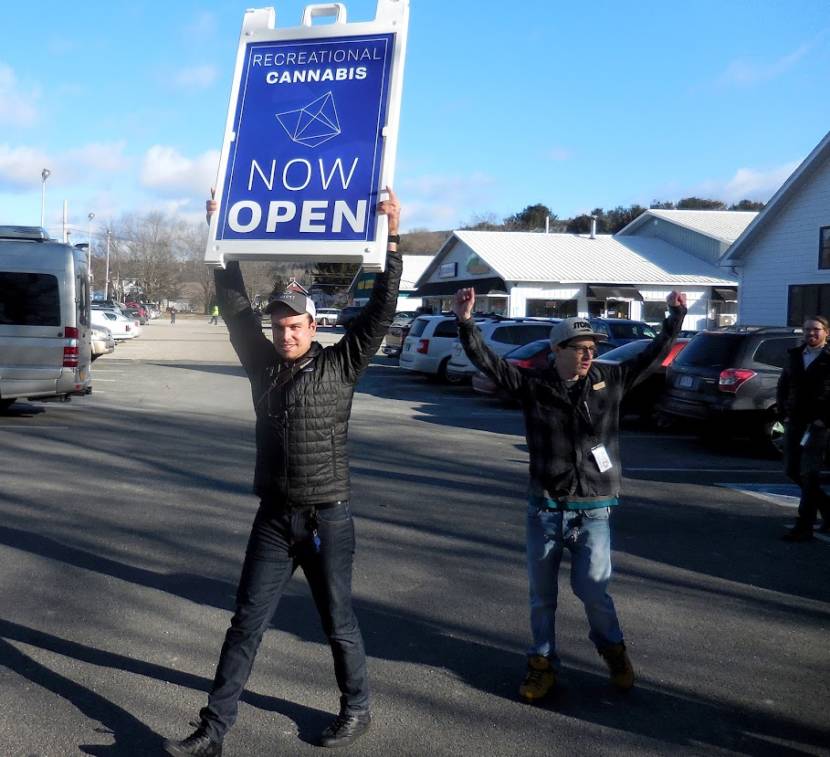 Great Barrington — “Hallelujah!” shouted a woman as she neared the entrance to what at that moment was surely her favorite retail establishment.

It’s not exactly the kind of word you would expect to come from the mouth of someone who had been waiting in a long line with 100 other people for an hour in single-digit wind-chill temps. But when you’re buying recreational marijuana legally for the first time in your life, just about everything seems grand.

That’s the kind of day it was on Friday, as Theory Wellness, which opened its doors last year as Berkshire County’s first medical marijuana dispensary, became the county’s first licensed seller of recreational cannabis products.

“We’ve been open for medical cannabis for over a year now, but this is a whole new phase for us,” Brandon Pollock, co-owner of Theory, said in an interview.

Indeed, it was quite a day — big enough to require three police officers on private details directing traffic in front of Theory’s store on Stockbridge Road. About half an hour before the planned 10 a.m. opening, there were roughly 75 people waiting in line to get in the door, though the line had started to form sometime between 7 and 8 a.m. An hour after opening, the number of people in line had expanded to 100 with a wait of about an hour, according to Theory’s Twitter feed.

“We’ve got a lot of new people here, so this is a big move for everyone,” said Thomas Winstanley, Theory’s marketing director. “There are a lot of people who are excited about being in cannabis, too. It’s been an exciting journey.”

In its Great Barrington store, Theory has expanded its number of employees to 35 from 5 just to accommodate the anticipated demand for so-called “adult-use” cannabis. That brings Theory’s total number of employees to 100, including those who work at the company’s cultivation facility and medical dispensary in Bridgewater, Pollock said.

But Winstanley emphasized that Theory’s medical patients (that’s what the company calls its customers who have a prescription) will continue to “be our top priority.

“They will absolutely be getting the same access to products,” Winstanley explained. “We have a nice little waiting area for them. They don’t have to wait in the corral.”

Indeed, the environment inside Theory’s retail facility is nothing like a liquor store. It more resembles a bank with earth tones, modern art, rope lines and hipster music. Outside the front door, there were a few heaters and a line of customers that snaked around the edge of the parking lot all the way to Route 7, where a table staffed by the Marketplace Cafe was set up offering free hot coffee to shivering patrons.

See video below of the interior of Theory’s retail operation as the first adult-use customers walked through the doors:

In anticipation of high customer volume in its first week or two, Theory has acquired additional parking spaces from the adjacent Laramee’s Cleaners and Mavis Tire, with an overflow lot in back of the Barrington Brewery.

Pollock said concerns about potential supply problems has prompted Theory to impose limits on the amount of product available for purchase to customers per visit. Click here to view the restrictions in place. Theory has supplemented its own cultivated product with limited outside wholesale purchases.

“We reserve a certain amount of inventory for our patients because we don’t want any interruption there,” Pollock said. “You can only grow so much cannabis. It does take a long time to grow.”

Most the customers standing in line were delighted. Many were from out of state. Two of the three states that border Berkshire County — Connecticut and New York — have medical marijuana programs but have not yet legalized the recreational variety. The third — Vermont — has legalized possession and cultivation for recreational purposes but has not yet approved retail sales.

Most of those interviewed by The Edge declined to give their last names. Jim from New York said he found out about Theory’s opening from news media accounts and from friends. He is a current medical marijuana patient in New York but the state only allows the sale of cannabis in pill form, which is one of the reasons he came to the Berkshires to buy. However, Gov. Andrew Cuomo recently vowed to fight for the legalization of recreational sales “within months.”

“We were planning on heading out toward Cape Cod so we figured this would be a good stop,” Jim said, looking relieved.

A young woman named Olivia had just moved to Connecticut about 40 minutes south of Great Barrington.

“I think it’s coming soon,” Olivia said, looking excited about recreational cannabis sales in her state, where newly elected Gov. Ned Lamont and members of the state legislature have indicated they, too, would like to see adult use legalized.

The first customer of the day was Stockbridge resident Ariane Blanchard, who has been a medical cannabis customer since Theory opened last year. As a medical patient, she was able to cut through the line.

“I thought originally there were going to be separate dispensaries, and I see now that they’re all going to be together. That’s fine as long as we get our preferential service,” Blanchard said.

Blanchard used to live in the Flag Rock housing development in Housatonic, where she developed an allergic reaction to mold. The medication she took made her feel even worse. The marijuana makes her feel much better “without all the side effects.”

“I hope they are a raging success,” Blanchard said of Theory as she was getting into her car to leave. “They’re nice guys, they have good quality and, inside, there’s really nice people that are knowledgeable.”

In an interview, Police Chief Bill Walsh said he had three officers to start with and he has daily conversations with Pollock and his business partner Nick Friedman about security needs.

As is the case with a construction detail in town, some of the officers are from his department and some are from out of town, depending on availability. The private police details are paid for exclusively by Theory.

We’ve got some good traffic overflow plans,” Walsh said. “My main thing is keeping Route 7 open and flowing and keeping them orderly in the parking lot. And so far, so good.”

Edge writer Sheela Clary has penned a series of articles examining the implications of the legalization of marijuana: