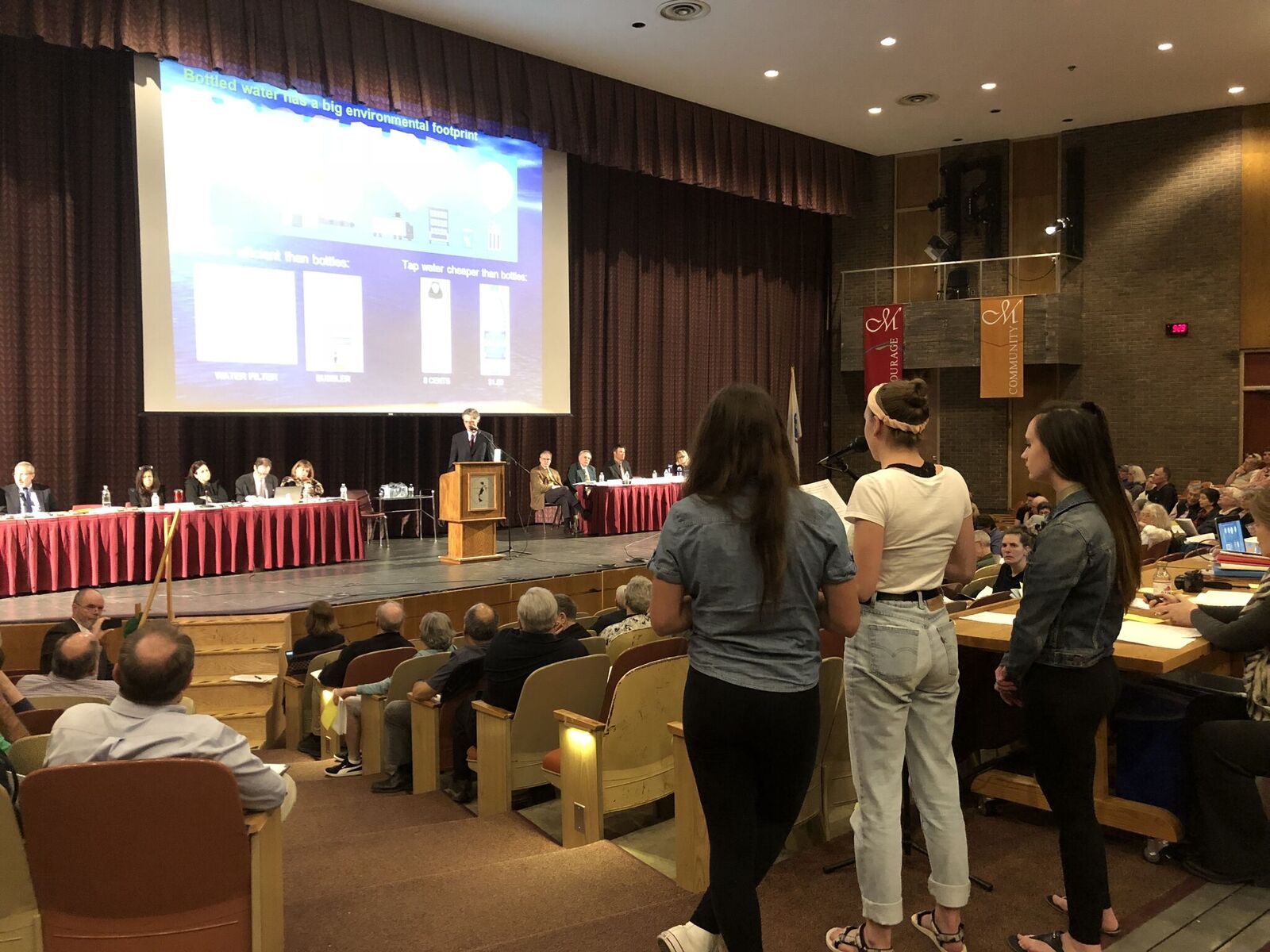 Editor’s note: This article has been revised to reflect the correct date on which the new bylaw will take effect.

Great Barrington — It was like few other phenomena this reporter has seen in more than 10 years of covering New England town meetings.

Most observers I spoke to before last night’s meeting thought it was unlikely a proposed ban on single-use plastic water bottles would pass. Merchants were worried about the impact on their businesses. Even progressive lion Ed Abrahams, who, with the retirement of Sean Stanton, is likely to become chairman of the selectboard in a few short days, wasn’t sure it was the right time.

“We should all use less plastic, we should all create less trash, but I agree with Mr. Moro,” Abrahams said in response to a letter of opposition in The Edge from Andy Moro, who chairs the Great Barrington Republican Town Committee. “This proposal is the right sentiment, but going about it the wrong way.”

But what started off as a civic exercise — educating the public about the plastic menace — turned into a lesson in how a righteous cause can gather steam, convince fence-sitters, transition to a generational issue and overwhelm the opposition in the Monument Mountain Regional High School auditorium.

Such was the case last night, as one speaker after another waxed eloquent about the harm plastic debris is doing to the environment and the presumed ease of shifting to a different model of portable water consumption: reusable steel or glass containers easily refilled at water stations throughout town and elsewhere.

There was a heartfelt presentation by three young women: Carly Terranova, Olivia Jaffe and Grace Phair — Monument students all — who had worked with the environment committee of the Berkshire Women’s Action Group to gather signatures for the petition, perform research, make the case for the proposal and package it in a marketable PowerPoint presentation.

See video below of the presentation, debate and vote on Citizens’ Petition, Article 22:

“Our generation is fed up with the pollution and toxicity we have inherited,” Jaffe said without sounding terribly self-righteous. “We want change.”

Jaffe asserted that consumers will also save money by abandoning bottled water, insisting that, “We are proposing an exciting vision.”

Moro applauded the initiative of the three students but insisted the ban, which will take effect May 1, 2019, would hurt retailers and small-business people who, after all, “are the ones that employ us, our children and us older people. It turns the burden right on them.”

To much laughter and scattered applause, Moro also noted the irony of the single-use plastic Polar water bottles sitting on the stage table in front of each selectmen and the members of the finance committee.

“Next year all these bottles up on that stage are going to be eliminated,” cracked Moro, who suggested greater recycling efforts instead of a ban.

Addressing the proposal’s opponents who insist that increased recycling is the answer, Terranova said, “Recycling is not the answer.”

In 2016, she said, the Environmental Protection Agency reported only 31 percent of our PET plastics, the kind used for water bottles, was recycled. China previously took most of our recyclable plastics but no longer accepts them, according to a report in the New York Times.

After Moro, one speaker after another spoke of the value of the proposal. Ben Barrett described himself as a small-businessman with “a laissez faire” approach to regulation but he conceded, “It’s time to rethink our approach to plastic.”

Entrepreneur Anni Crofut spoke of an opportunity to “rebrand ourselves as visionary enterprises that offer sustainable alternatives.” Architect Steve McAllister said he is not the kind of person to jump on every “bandwagon” but the view of the Housatonic River from his Bridge Street office had an impact on his thinking.

“What convinced me of the problem is being able to see the trash in that river,” McAllister said.

Dale Abrams, vice president of the Great Barrington Land Conservancy’s board of directors, also went after the corporations: “The honest truth is we’ve been sold a bill of goods by the likes of Nestle and Coca Cola. Almost every one of us in this room grew up without the need for disposable water bottles. Let’s make the change here now!”

John and Diane Tracy, who own Gorham & Norton, told the Edge they sell 30 cases a week of Poland Spring during the summer. They opposed the proposal, but sat stony-faced and silent as the momentum built.

Great Barrington businessman Terry Flynn introduced an amendment to the proposal that would, among other things, exempt police, firefighters and EMS first responders from the ban. It passed overwhelmingly.

At the beginning of the meeting, town clerk Marie Ryan said about 400 people were in the auditorium. When the proposal came up for a vote, near the end of the almost-four-hour meeting, it looked like only half remained.

After a discussion of about 12 minutes, a call for a vote came from someone in the audience. That call effectively prevented Railroad Street resident Steve Farina, a critic of the ban, from speaking out against it—a move that elicited mild cheers.

“I am not sure how anyone wins when a known voice of dissent is silenced using a cheap parliamentary trick,” Farina later told the Edge. “Silenced from bringing clarity and truth to the information presented by a group of supporters … Sadly, some of the cheering was clearly because my position was not allowed to be presented.”

Town moderator Michael Wise determined that a secret ballot was not necessary. A show of hands revealed the measure passed by a ratio of about 2-1. And that was it.

Business woman Jenny Clark, who worked tirelessly on the ban, was elated at the outcome. So were other members of the environment committee of BWAG. Clark said she has a friend who brought two other friends to the town meeting. All three were skeptics but later told Clark they were convinced of the worthiness of the bylaw.

“This comment validated the long hours, the many merchant visits we made, the research we did, the endless emails and editing of our PowerPoint show, and the great opportunity we had working with three brilliant high school girls,” Clark told the Edge this morning.

Edge reader Joseph Method said he “went into the meeting thinking I was going to vote against the bylaw. The presentation and the discussion actually changed my vote. I was also swayed by the fact that the selectboard and finance committee all had single-use water bottles in front of them. It ended up being a good visual demonstration of how easy it is to slip into a destructive behavior.”

“We’re so proud of this community that stood up last night and did the right thing,” added Marcia Arland, an Egremont resident who is a member of the BWAG environment panel. “We’re impressed with this community and happy to be a part of a place that can make a difficult choice in this polarized political climate.”

Brad Verter, founder of the Mass Green Network, whose members have passed dozens of bag and Styrofoam bans over the past two and a half years, told the Edge that Great Barrington’s bylaw “paves the way for more local laws to reduce waste from bottled water.”

“When we started in 2015, there were only 16 bag laws,” Verter said. “Today there are 73, and we are close to passing a statewide bill. Thanks to Jen and her colleagues in Great Barrington, we are looking to build the same sort of momentum with bottled water.”

So there you have it. An issue that didn’t really seem to be catching on saw a wave and rode it onto the beach as its opponents watched in awe of its near-perfect performance. Much to their credit, the victorious surfers aren’t gloating.