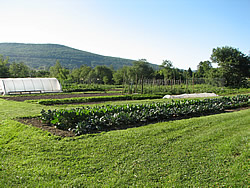 Tyringham — For decades most farms in America have had one family member working off the farm to help provide a livable income. But occasionally one finds a situation where the farm actually supports the family without outside employment. And you need only go as far as Tyringham to find this farm, Woven Roots.

Pete and Jen Salinetti, owners of Woven Roots, moved into their farmhouse last year, although they had been farming the property for three years. They have been farming for 15 years, mostly on Pete’s family’s land in Lee. Now, though, they are building a good life on five acres they own and another five acres they rent from members of the Howard family.

The Salinetti’s desire to have their own farm coincided nicely with Tyringham’s serious effort to encourage affordable housing. The Howard sisters, longtime residents in the town, own a good-size dairy farm worked by a tenant farmer. But he does not use all of the land so they were able to work with the Salinettis in their efforts to create their own farm.

The Howard family used a consultant to set up their arrangement with the Salinettis. Basically the couple will “work off” the difference between what they paid for the land and its market value. It is a “stewardship” agreement which will involve helping to restore fields and pastures, manage invasives, mend fences and stone walls, and other maintenance issues.

The Salinettis grow more than 75 crops, “all the usual stuff,” plus a considerable amount grown to extend their season, such as winter hardy greens that are able to take cold weather in their unheated greenhouse. These crops are planted from late August to late September for winter harvest.

The couple operates the Woven Roots CSA, begun five years ago when they were still farming on Pete’s family’s land in Lee. “We needed enough skill to grow food in quantity and succession,” says Pete, explaining why they began their CSA with ten members. Today, they have 62 households enrolled. Although most of the members live in or near Tyringham, some come from Pittsfield, Otis, New Marlborough, and Becket. The couple plans to increase their CSA membership to 100, but are doing so gradually. 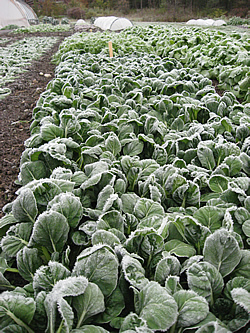 “We’re slowly getting bigger,” says Pete, “but we do everything by hand. That means no tractor farming and no till farming. We don’t cultivate so we don’t have to weed. We have a permanent bed system, and all aisles are a certain width.” The permanent bed system allows them to feed their soil year after year, increasing the nutrient density and quality of their crops.

They use a u-bar, a broad fork, to aerate their beds by hand before each planting. They use 5-gallon buckets and an iron rake to spread the compost, and then apply a light application of crabshell or organic alfalfa. As their website states, “When the soil is aerated, but not disturbed, water and nutrients percolate through with ease, creating a perfect environment for nutrient-dense crops.”

Pete acknowledges that their farming method is relatively unique here in the Berkshires. But the couple believes that no-till farming minimizes the negative effect on the environment because of its limited use of fossil fuel.

One of the features of their CSA is a flower garden where Jen shows the CSA members how to cut the flowers. The couple also oversees Farm Adventures, a children’s workshop during CSA pickup times. Twice a month about 12 youngsters get together to learn about farming.

Education is a major focus for the Salinettis. They believe their farming techniques are applicable to home gardens because they do not rely on heavy equipment. The couple is planning an education center that they would run themselves, along with several teachers. They envision a barn with education space and a commercial kitchen. In due time, they plan to offer community meals.

Jen runs the garden program for the Montessori School of the Berkshires, and has been helping Project Sprout reinvigorate itself at Monument High School. The couple has offered apprenticeships for high school students, primarily on agriculture, with attention paid to food justice. They share a strong interest in connecting people with their environment.

Both Salinettis knew they wanted to farm and directed their higher education to that end. Jen has a degree in sustainable agriculture and herbal medicine. Pete’s degree is in horticulture from the University of New Hampshire.

Their son Diego, 11 years old, and 9-year-old daughter Noelia are active on the farm. Diego’s regular job is mowing, but his real love is motors, which he is adept at fixing. Noelia, a small sprite, gave me a knowledgeable and spirited tour of the farm, driving their cart like a pro.

Woven Roots Farm in Tyringham is a model for landowners with arable land, and for farmers who could not otherwise afford prime land. We all benefit from such arrangement and hope that it will serve as a model for other collaborations.