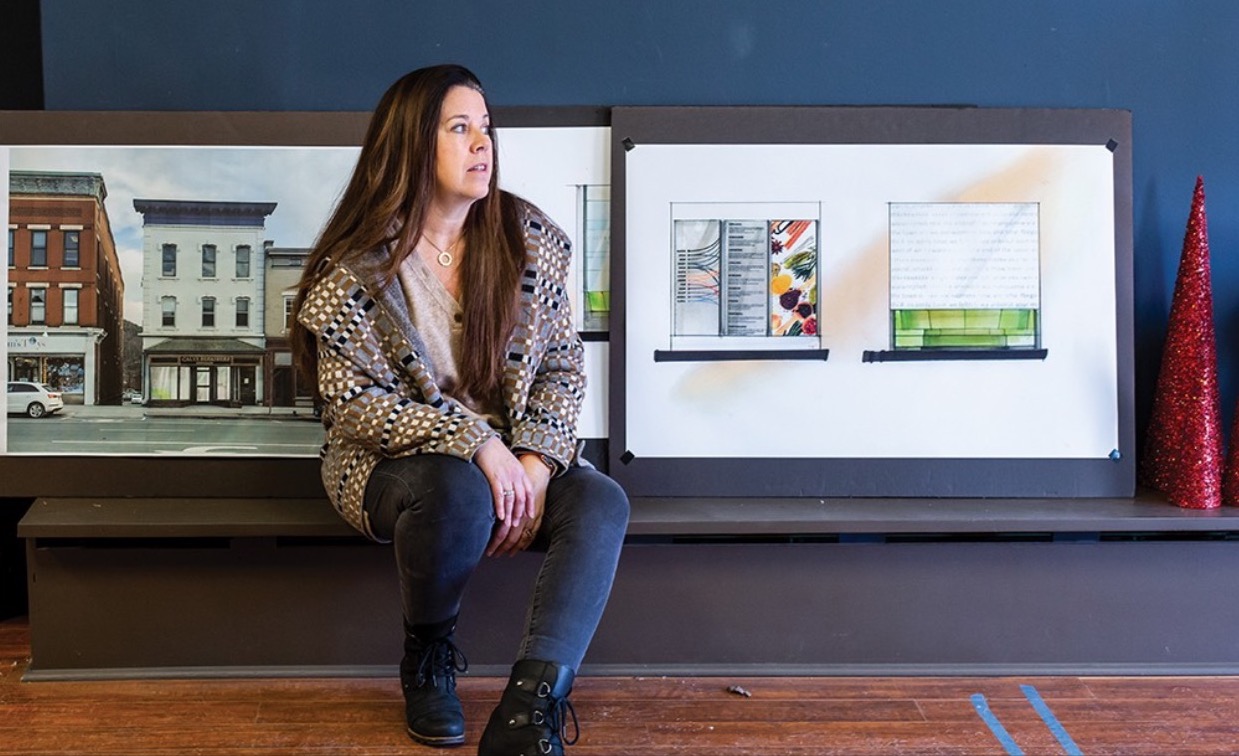 Donna Norman, owner of Calyx Berkshire, takes a break inside her store, which is slated to open later this spring. Photo: Anna Sirota

Great Barrington — The women-owned and -operated cannabis boutique Calyx Berkshire has started building its store after jumping over numerous hurdles to get a provisional license from the state. Calyx owner Donna Norman, alongside her partner, Debra Nosenzo, said they’re excited to educate their customers in a friendly and welcoming environment.

Norman has a lot in store for Calyx, the self-styled boutique marijuana store appropriately named after the female part of the cannabis flower. She says she’s excited to open the first women-owned cannabis store in Berkshire County.

Calyx intends to work with nonprofits that help to represent its brand of women supporting women. Already, they’re in the process of building relationships with R.E.A.C.H., the Elizabeth Freeman Center and the United Way.

William Caligari, who has helped design other cannabis dispensaries, including Berkshire Roots in Pittsfield, is working with Calyx to create a welcoming environment. Norman plans on creating a waiting area for customers to avoid long lines stretching into the street, and including interactive elements throughout the building.

A significant part of Norman’s goal, she says, is to “teach the canna-curious customer about the plant.” She wants it to be “more than just come in, stand in line, get your product and go out the door.”

As a way to set Calyx apart from other cannabis retailers, Norman “will be in this store every day. Customer service is a big part of having a successful cannabis store […] I’m going to know my customers, and no one’s doing that,” she said.

Just as well, Norman strives to “support as many women in this space” as possible. This will include selling women-created products such as CBD lines, pipes and edibles.

Norman believes it is “super important for women to get involved in the early stages [of the cannabis industry]. I think women just kind of fit into this role,” for she believes “women have always been in charge of wellness.”

Although there is some nervousness surrounding Calyx opening so close to two toy stores, Tom’s Toys and Matrushka, Norman believes once the residents see Calyx isn’t “this scary thing appearing on Main Street, I think people will relax, but you know, [residents are] scared of the unknown.”

Calyx began its journey two years ago when Norman began paying rent on the former Joe Dagget storefront on Main Street in Great Barrington. However, without her provisional license, all Norman was able to do was decorate her front windows with paper flowers and a banner that read “Not your typical flower shop.”

In order to begin building her shop, Norman was required to negotiate a host community agreement from the town. She was the first recreational cannabis business in Great Barrington to do so, for Theory Wellness already had a host community agreement for its medical marijuana dispensary. The only changes Theory had to make in order to add recreational sales to its existing medical operation was to create a separate line for medical and do some inventory changes, which allowed it to open fairly quickly.

Norman then had to go through the “daunting” process of getting her license from the state Cannabis Control Commission: “I don’t think anyone really understands until they’ve gone through the process how hard it really is.”

When Norman submitted her CCC application, she checked the Disadvantaged Business Enterprise box titled “women,” which she was led to believe would have given her priority licensing. Instead, all the existing medical dispensaries were given first priority.

It was after receiving the host community agreement that Norman took it upon herself to investigate how to get designation as a woman-owned company. Norman went to the Massachusetts Supplier Diversity Office, completed a certification course and filled out another application similar to the CCC’s.

However, at the end of that process, the head of the SDO told her that in order to certify her as a woman-owned business, they would need to physically visit her store and see that it was 100% woman-owned, which was impossible until after state licensing with the CCC.

This raised a new dilemma: “How could I ever get certified? I don’t have my license; I can’t open my store,” said Norman.

I wasn’t until Norman contacted Commissioner Shaleen Title that the process started to become a little easier. She explained to Title, “you are putting hurdles in front of women; it’s a catch-22. These two government offices have to get together and figure this out.”

This conversation helped the CCC issue an affidavit, which stated, upon receiving a license, one must go back to the SDO office and get a DBE certification with the state.

“I feel very proud that I was a part of that [process] and hopefully helped all the women behind me that are in the queue waiting for their priority certification,” said Norman. The CCC has recently implemented some changes, and hopefully small business operators can move more quickly through the licensing process.

Finally, Norman received her expedited review in December, an entire year after submitting her application, followed by her provisional license on Jan. 7, which allowed for the start of her buildout.

Calyx Berkshire will be holding a job fair Friday, March 6, from noon to 4 p.m. and Saturday, March 7, from noon to 7 p.m. The fair will be held at the store at 307 Main St. in Great Barrington.