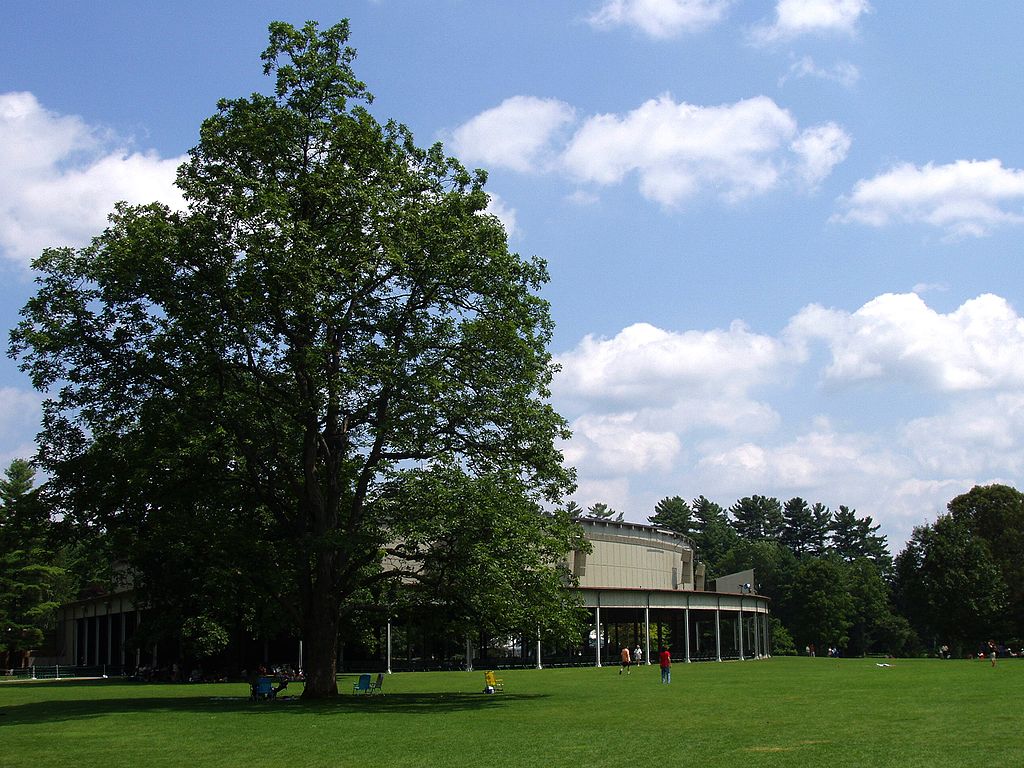 The Koussevitzky Music Shed and lawn at Tanglewood in Lenox. Photo courtesy Wikipedia

Boston — The Boston Symphony Orchestra, whose Tanglewood summer home attracts hundreds of thousands of entertainment seekers in the Berkshires, has announced layoffs, staff reductions, salary reductions and other cost-cutting measures to address revenue shortfalls in the face of the COVID-19 pandemic.

In a statement Friday, BSO officials said the orchestra has canceled more than 130 events between March 12 and mid-June, including the last seven weeks of its 2019-20 BSO season and, most recently, the cancellation of the 2020 Boston Pops season.

Click here to read the entire BSO statement. The BSO told The Edge no decision has been made on the summer season at Tanglewood. Last week in announcing the cancellation of the Boston Pops spring season, the symphony said decisions about this year’s Boston Pops fireworks spectacular and the 2020 Tanglewood season will be made “over the next several weeks” as orchestra officials continue to monitor the recommendations of health authorities. That statement still holds, BSO spokesperson Emily Cotten said.

The BSO did not say what its total budget is, but according to its publicly available 990 form filed with the Internal Revenue Service, its expenses for 2017 (the most recent year available) were more than $105.6 million.

To offset the financial impact the global health crisis has had on these activities, the 137-year-old nonprofit is implementing a series of cost containment measures throughout the organization, developed by the BSO’s board of trustees and management team.

Among the steps that are being taken, the orchestra said, are musician and staff salary reductions and temporary staffing furloughs. The BSO board is also “in the process of implementing plans for immediately increased fundraising that will play a critical role in addressing its financial crisis.”

“Though greatly significant, these measures, described in further detail below, only address a fraction of the losses resulting from these concert and event cancellations,” the BSO said.

Calling its decision “historically significant and impactful … in this unprecedented time of the COVID-19 health crisis,” the BSO said members of the orchestra have unanimously agreed to make concessions, including a reduction in their salaries through the end of August equivalent to 25 percent.

Staff actions include temporary furloughs of 70 full-time employees starting Monday, April 20. BSO said the affected staff will retain health care coverage as well as many other benefits, and will be eligible to apply for unemployment insurance and supplemental income under the terms of the federal Coronavirus Aid, Relief and Economic Security (CARES) Act.

“The decision-making process to determine which BSO employees would be furloughed was based on a careful assessment of the current needs of the organization during the period of canceled performances,” BSO officials said.

There will also be a 5 percent to 15 percent sliding scale salary reduction policy “for a significant portion of the staff.” In all, 80 percent of the BSO’s full-time employees will be impacted by the furloughs and salary reductions. Throughout the organization, the BSO said, there have been more than 400 part-time personnel who were previously furloughed in connection with the concert cancellations.

Mark Volpe, BSO president and CEO, will take a 50 percent reduction in his base salary. According to the aforementioned tax documents, Volpe’s 2017 salary was nearly $1 million, with other reportable compensation totalling just over $50,000.

BSO music director Andris Nelsons will not receive compensation for all canceled performances. Boston Pops conductor Keith Lockhart will also take “a substantial cut in his compensation.” In 2017, Nelsons was paid nearly $1.2 million for his services and Lockhart almost $920,000, according to the BSO filings.

“It is deeply heartening to see so many members of the BSO Family — musicians, staff, and artistic and board leadership — express such deep concern and desire to help with the programmatic and financial challenges we are facing as a result of the concert cancellations due to COVID-19,” Volpe said.

“All of us on the Board of Trustees of the BSO, along with our extraordinary musicians, management, and staff are confronting this unprecedented challenge with great determination and strength,” added BSO board chair Susan Paine. “We are fully united in our goal to navigate this once-in-a-generation crisis head-on and to returning the BSO to equilibrium as soon as reasonably possible.”

With in-person performances made impossible because of restrictions imposed on social gatherings, the BSO has made available a wide variety of audio and video performances online at BSO at Home. A Boston Pops at Home online initiative will be modeled in part on BSO at Home and is scheduled to be released in early May.