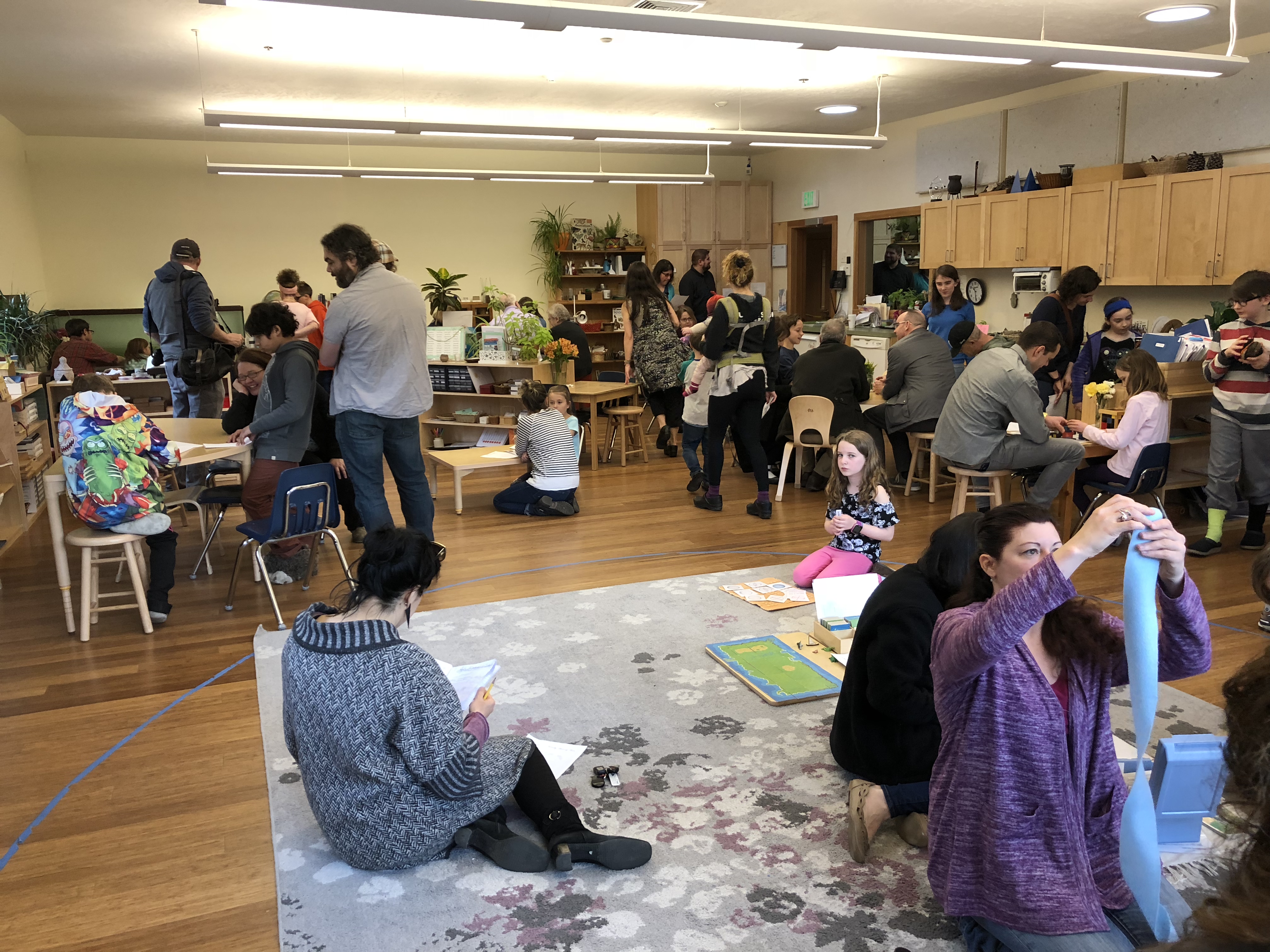 Montessori School of the Berkshires students and parents gathered at a recent celebration of the opening of the school's new music studio and multi-purpose room. Photo: David Scribner

Lenox Dale — A recent spate of warm weather has students and teachers beginning to tally the waning days of the school year. At the Montessori School of the Berkshires, however, they are just settling in — to their new digs, that is. The entire MSB community — made up of students ranging from toddlers through eighth-graders — recently celebrated the opening of their music studio and multi-purpose room, part of the school’s Phase II expansion that includes a 7,300-square-foot addition to its existing 9,000-square-foot building. Furthermore, enrollment is on the rise, which, in light of declining school aged population across the county, begs an important question: What about the Montessori philosophy is so appealing?

“Each moment in a child’s development is a critical part of their development and we create intentional environments that meet the needs of those different age groups,” said Head of School Todd Covert in a recent statement. “I can’t really say why our enrollment has been increasing while trends in school-aged students have been declining,” he continued, adding “we have a supportive Board of Trustees, a fantastic community of families, and a great staff.”

The Montessori Method of education is founded on Dr. Maria Montessori’s (1870-1952) educational philosophy, at the center of which is a basic principle: Follow the child. Based on the idea that children learn best when the environment supports their natural desire to acquire skills and knowledge, a Montessori classroom is carefully prepared to allow the child to work independently and allow for the joy of self-discovery. Covert went on to explain that Montessori is one of the largest educational philosophies in the world. It is an approach that values the human spirit and the development of the whole child — physical, social, emotional and cognitive. In its first decade, MSB more than quadrupled its enrollment. Expanding beyond its initial early-childhood class of 24 children aged 3 to 6, the school added programs over its first four years to encompass the full Montessori curriculum from toddlers through eighth-graders. With this expansion, MSB has now opened a second elementary classroom that serves students in grades one to six, thereby bringing the school up to six mixed-age classrooms and an overall capacity of 140 students.

“We are thankful for our community who continues to support us in creating environments that help children follow their interests and passions to develop strong skills in academics, leadership, self-discipline, responsibility, independence, and initiative,” said Covert. “Our environments are hands-on, self-paced, collaborative, and joyful — everything that’s needed to create a lifelong learner and doer.” The global impact of Montessori education, over the last 100-plus years, has been great. There is Montessori in 110 countries, and over 22,000 Montessori schools worldwide.

Marc Maurino and Dana Harrison, who have been Montessori parents since the day the school opened in 2006, stated: “We’re grateful to have Montessori in our lives, and to be honest, also proud — proud of the school, of its leadership, of its teachers and staff, and of all of us who show up to make this school what it is — a safe place where children are honored and respected, and where we are ever expanding — in learning, in creativity, and in our compassion and care for one another.”

Additional Phase II highlights include expanded outdoor environments including an educational courtyard, gardens, greenhouse and playfield. The educational courtyard provides each classroom with its own outdoor environment for activities like container gardening, and the larger gardens and greenhouse allow for year-round undertakings. These spaces complement the new adolescent classroom, visual arts studio, library, lounge and staff offices included in the first part of the expansion project. In Montessori schools, the environment is a critical part of nurturing cognitive, intellectual, social and emotional development in children. Through meticulous design, the classroom space empowers children and fosters their independence. It took more than a year of careful collaboration among Covert, architect Dana Bixby, and Joe Lewis, the representative for general contractor Allegrone Companies, to ensure that the new space would fully support the school’s mission.

Based upon information furnished by the U.S. Census Bureau, it is clear that school enrollment is impacted by the declining population — due, in particular, to the significant decrease in young adults. In the absence of young adults, the number of births in Berkshire County has decreased and will continue to plummet unless more young adults reside in the county.