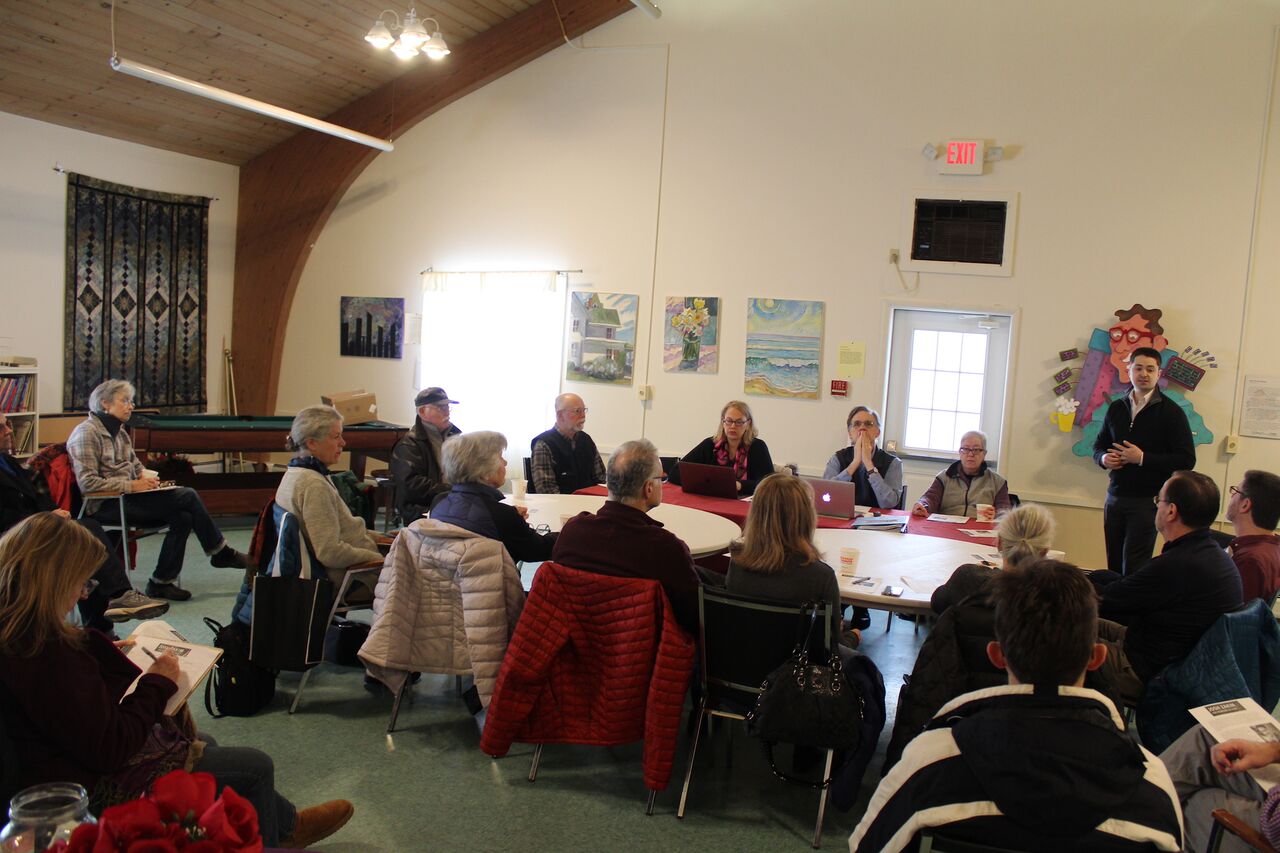 Great Barrington — Not once did Josh Zakim use the phrase “social justice” to describe his motivation for running for secretary of state, but it clearly is a factor in his thinking.

The Boston city councilor, a 33-year-old who is running to unseat fellow Democrat and longtime secretary Bill Galvin, came to a meeting of the Great Barrington Democratic Town Committee Saturday morning at the Claire Teague Senior Center and told the couple of dozen committee members and onlookers that his inspiration to run came from the time he spent chairing the city council’s Civil Rights Committee.

“I introduced the Boston Trust Act, which is the bill that made Boston what the president would call an ‘outlaw sanctuary city,'” Zakim said. “We’ve been threatened with arrest most recently from the Justice Department and from ICE, and I continue to be incredibly proud of that work.”

As Zakim surely knew, the topic resonates in Great Barrington, which joined Pittsfield and North Adams in Berkshire County in passing its own version of the trust act last year.

But as much as Zakim cares about the immigrant community, his focus in running seems to be on voter rights, which makes sense because the secretary of state is also the chief elections officer in Massachusetts.

“But as we kept doing this work, I kept hearing from people and I was actually surprised to hear that, despite our progressive reputation and despite the fact that we think we’re a beacon of good government and democracy in this country–and in many ways we are–it’s not as easy to vote in Massachusetts as it should be.”

Zakim listed what he called “unreasonable barriers” to voting. It is not easy to register and not easy to get to the polls on election day. So the Civil Rights Committee held hearings and decided to work to make registration and voting easier in Boston.

See video below by Terry Cowgill of Zakim answering questions from the Great Barrington Democratic Town Committee and others in the audience:

After that hearing, Zakim introduced a bill that would create what he called “almost an automatic voter registration in Boston,” so that when, for example, a resident applies for a residential parking permit, gets a library card, registers for school or otherwise sign up for city services, “you are registered for the opportunity to vote.” Zakim also favors same-day registration.

“It’s low-cost, low-impact and it will dramatically increase our voter registration because turnout in city and state elections is pretty low as it is,” Zakim explained. “So we need to do more on that–and there are huge segments of our population that feel disenfranchised and I think rightfully so.”

Zakim has also blasted Galvin’s office for appealing a Superior Court ruling last summer that struck down a state law requiring voters to be registered at least 20 days prior to an election in order to participate in it.

“That’s the sort of behavior I would expect from elected officials in Alabama or someplace like that, not here in Massachusetts,” Zakim told WBUR last year.

He also faulted Galvin for scheduling party primaries this year on Tuesday, Sept. 4, the day after Labor Day, which Zakim has said is a very busy day that clearly discourages voter participation.

Zakim also pointed out that the secretary of state is the chief securities regulator for Massachusetts. That portion of the secretary’s job is roughly the state equivalent of the federal Securities and Exchange Commission.

“I don’t know about all of you, but I do not expect Donald Trump’s SEC or FBI to be helping small investors or consumers if they’re taken in a stock scam,” Zakim said with more than a hint of sarcasm.

Zakim was effusive in his praise of Maura Healey, whom he described as “a great attorney general” and an office holder who has the authority to prosecute securities fraud and related crimes. But he added that Massachusetts also needs a secretary of state who uses his authority to impose “administrative sanctions, fines … and order the repayment of money that’s been falsely taken.”

After graduating from the University of Pennsylvania and Northeastern University School of Law, Zakim, the son of the late Leonard P. Zakim, a Jewish-American religious and civil rights leader in Boston, says on his website that he “fought for economic justice” and “began his career at Greater Boston Legal Services where he represented working families who were facing the loss of their homes to foreclosure at the hands of predatory banks and lenders.”

Furthermore, the secretary is supervisor of the state’s public records, which Zakim said are not easily accessible enough and that “there’s no reason most of these public records shouldn’t be searchable online.”

“We don’t need someone who is continually going to court to prevent the release of public records and that’s what has been happening far too often,” Zakim said of Galvin.

Indeed, Galvin’s reluctance to release information concerning public officials led to a scathing editorial two years ago in the Patriot Ledger of Quincy calling for the state to put the attorney general’s office in charge of public records. The paper called one of his information refusals a “galling act of obstructionism” and recommended voters “terminate Galvin’s employment” in the next election.

Lastly, Zakim talked about accessibility, an issue he obviously thinks Galvin, who was first elected secretary in 1994, is vulnerable on.

“I talk about literally and figuratively opening up the office, being out across the commonwealth–not just on Beacon Hill–answering phone calls and emails,” Zakim said.

But Zakim kept returning to the issue of voting, which he characterized as “our most fundamental right.” He acknowledged that some of his ideas will require legislation and that the path will not always be easy but it does require leadership, something he clearly thinks has been lacking from Galvin’s office.

Committee member Fred Clark noted that, “First of all, you get a lot of points for just showing up.” Clark noted that the Boston area, inside the I-495 beltway, comprises some 70 percent of the state’s lawmakers and population, so Zakim’s trip to the Berkshires is commendable.

Clark asked what could be done to help town clerks provide the necessary services for elections. Zakim said it’s not only a matter of budgetary support from the secretary’s office but also in advocating for change with lawmakers on Beacon Hill.

It may be that the legislature is sort of okay with the way things are,” Zakim said. “but they need to be pushed on these things.”

In response to another question about ease of voting, Zakim said, “For most of us in this room, getting to the polls on election day is probably not a huge struggle. But for a lot of people, particularly if you’re working more than one job, or you’re caring for a parent or grandparent–whatever it is–it’s not that easy.”

Galvin’s office is not used to a vigorous challenge from another Democrat–or even from a Republican, for that matter. Since his election in 1994, Galvin, 67, has been primaried only once–in 2006 by attorney John Bonifaz, whom Galvin trounced 87 percent to 17 percent.

In December, Galvin branded Zakim “sneaky” in the way he went about organizing his candidacy and suggested Zakim was trying to increase his name recognition for a future race.

“The Boston City Council is sort of an incubator,” Galvin said of Zakim, according to the Boston Herald. “When you get paid that much to do so little, I guess you have a lot of time on your hands.”

Notwithstanding his sarcasm, Galvin is clearly concerned, so the race bears watching. And the fact that Zakim was willing to get up at 6 a.m. on a Saturday and drive out to the hinterlands from the Back Bay suggests he knows it’s best not to ignore the Berkshires.