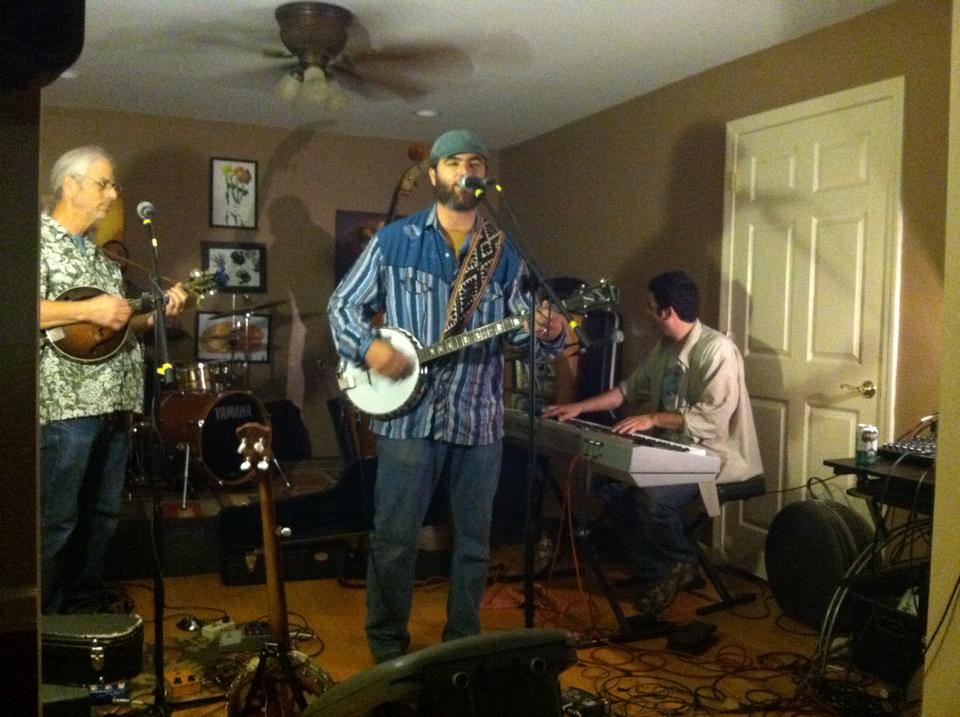 Chris Merenda and his band, The Wheel.

Pittsfield — For two decades, musicians have avoided Pittsfield. A lack of venues and a shambling economy make it difficult for artists to find appreciation. Last month, though, saw the first in a series of concerts that holds a promise for the Pittsfield music scene.

Chris Merenda surveyed the dancers like a hawk sizing up its surroundings, singing: “Billy Jean is not my lover…”

In between verses, he turned his back to the crowd, slouched, strummed, and stomped, letting his band gleefully take over.

At this point in the night, most of the 60+ attendees were twirling, shaking, shimmying, or moving in graceful and awkward ways. Some sat on the outskirts with amused faces; some had sampled heavily from the abundance of wine, liquor, and food.

Concerts can be impersonal, held in grungy bars. Audiences endure long drives, hunger, bad sound systems, or worse to hear the music they love. Sometimes, though, comfort and music come together. The Pitts House Concert Series pledges to marry music and amenities this winter, and the first concert delivered.

Held at the Pittsfield residence of Jennifer Jennings and Josh Bennett, at 12 Otis St., homemade spirits accompanied a potluck dinner, complete with “VEGAN” labeled dishes for diners of a certain ethos. Jim Toner, who helped organize the event, taped and broadcast it live, and countless other people helped make it a community concert. The show was a fundraiser for Chris Merenda’s son, who has autism.

Merenda was the evening’s frontman, accompanied by his band, The Wheel, who play “guitar and banjo driven rock.” Merenda’s former band, The Mammals, toured with Arlo Guthrie, with whom Merenda shares a drawl. He’s also borrowed some banter from Guthrie, the singer-songwriter known for Alice’s Restaurant; Merenda offers sarcastic, quizzical anecdotes between songs.

His vocals are equal parts Steve Earle and Curt Cobain, ranging from a raspy mumble all the way up to a roar-scream, which was used in a rendition of the Beatles classic Twist and Shout: “Ahh, Ahh, Ahh, Ahh… GRAAARGH!”

Throughout the night, the band toyed with dynamics, getting quiet and slowly building into a chorus, shimmering guitar lines, or a rowdy keyboard solo.

The band featured Bruce Mandaro on guitar and mandolin, Dave Christopolous on upright and electric bass, Jay Schultheis on drums, Benny Kohn on keyboard, and Merenda on banjo and guitar. Most members were involved in vocals in some way throughout the night, but the highlights came from Mandaro’s delicate guitar work. His fingers tiptoeing around the frets, with an array of effects pedals he produced singing leads, crunchy rock riffs, and snarling blues runs. He traded solos with Kohn, who blazed through bluesy pentatonic scales with a gigantic, beaming smile. On Facebook, the band lists only one interest: Pabst Blue Ribbon.

Josh Bennett, the concert’s organizer and host, has spent the summer assembling a close-knit group interested in concerts such as this. Next month, he will host Diablo Dimes, a New Orleans ragtime accordion extraordinaire. Tickets, sold through EventBrite, closed out quickly for the October show.

Bennett admits to being an amateur promoter, but it doesn’t show. He operates on a face-to-face basis, wisely, using social media only as a support tool. His philosophy is holistic; he pays musicians well, provides food and drinks at the show, and pays attention to the details.

Diablo Dimes will appear on December 12, at 6 p.m. For tickets, click here.

For a video preview of Diablo Dimes, click the link below: