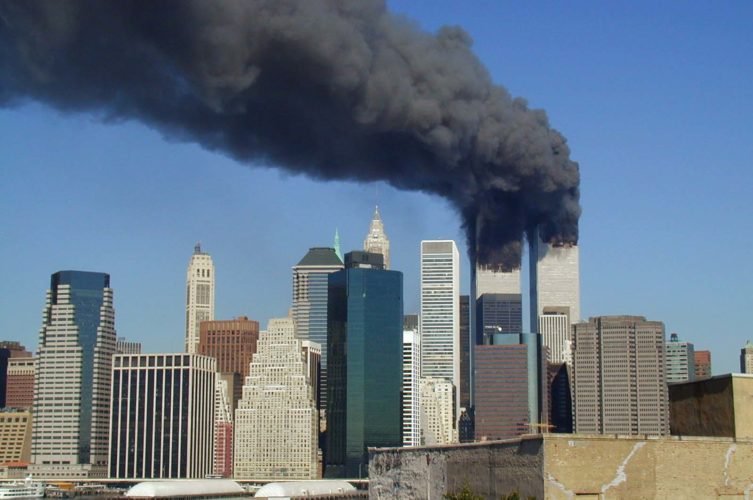 I turned the TV on and watched a plane crash into the Tower. I said, “They just showed a replay.” She quickly corrected me, “No, that’s another plane.” And we talked as we watched in horror, learning that it was the South Tower this time. Sitting next to my daughter was my future son-in-law; he had not had a day off from work in a year. He had finally taken a week’s vacation so they could go to Cape Cod, stopping for the weekend at our home in Great Barrington. He worked on the 100th floor of the South Tower. By chance, he had escaped the death that claimed 176 of his co-workers.

That was my introduction to the attacks. Twenty-one years have disappeared behind us, yet it seems like yesterday. And yet again, it seems like long, long ago.

Over the next few days, as the government and the media accused Osama bin Laden and 19 Arabs of being responsible for the attacks, I told a friend that what I was hearing wasn’t believable; the official story was full of holes, with the collapse of Building 7 leading the way. It was a reaction that I couldn’t fully explain, but it set me on a search for the truth. I proceeded in fits and starts, but by the fall of 2004, with the help of the extraordinary work of David Ray Griffin (see Bush and Cheney: How they Ruined America and the World) and other early skeptics, I could articulate the reasons for my initial intuition. I set about creating a college course on what had come to be called 9/11.

But I no longer refer to the events of that day by those numbers. Let me explain why.

By 2004 I was convinced that the U.S. government’s claims (and The 9/11 Commission Report) were fictitious. They seemed so blatantly false that I concluded the attacks were a deep-state intelligence operation whose purpose was to initiate a national state of emergency to justify wars of aggression, known euphemistically as “the war on terror.” The sophistication of the attacks, and the lack of any proffered evidence for the government’s claims, suggested that a great deal of planning had been involved.

Yet I was chagrined and amazed by so many people’s lack of interest in researching arguably the most important world event since the assassination of President Kennedy. I understood the various psychological dimensions of this denial, the fear, cognitive dissonance, etc., but I sensed something else as well. For so many people their minds seemed to have been “made up” from the start. I found that many young people were the exceptions, while most of their elders dared not question the official narrative. This included many prominent leftist critics of American foreign policy. Now that 21 years have elapsed, this seems truer than ever.

So with the promptings of people like Graeme MacQueen, Lance deHaven-Smith, T.H. Meyer, et al., I have concluded that a process of linguistic mind-control was in place before, during, and after the attacks. As with all good propaganda, the language had to be insinuated over time and introduced through intermediaries. It had to seem “natural” and to flow out of events, not to precede them. And it had to be repeated over and over again.

In summary form, I will list the language I believe “made up the minds” of those who have refused to examine the government’s claims about the September 11 attacks and the subsequent anthrax attacks.

I have concluded – and this is impossible to prove definitively at this time because of the nature of such propagandistic techniques – that the use of all these words/numbers is part of a highly sophisticated linguistic mind-control campaign waged to create a narrative that has lodged in the minds of hundreds of millions of people and is very hard to dislodge. It is why I don’t speak of “9/11” anymore. I refer to those events as the attacks of September 11, 2001, which is a mouth-full and not easily digested in the age of Twitter and texting. But I am not sure how to be more succinct or how to undo the damage.

Lance deHaven-Smith puts it well in Conspiracy Theory in America.

The rapidity with which the new language of the war on terror appeared and took hold; the synergy between terms and their mutual connections to WW II nomenclatures; and above all the connections between many terms and the emergency motif of “9/11” and “9-1-1” – any one of these factors alone, but certainly all of them together – raise the possibility that work on this linguistic construct began long before 9/11….It turns out that elite political crime, even treason, may actually be official policy.

His use of the words “possibility” and “may” are in order when one sticks to strict empiricism. However, when one reads his full text, it is apparent to me that he considers these “coincidences” part of a conspiracy. I have also reached that conclusion. As Thoreau put it in his under-appreciated humorous way, “Some circumstantial evidence is very strong, as when you find a trout in the milk.”

The evidence for linguistic mind control, while the subject of this essay, does not stand alone, of course. It underpins the actual attacks of September 11 and the subsequent anthrax attacks that are linked. The official explanations for these events by themselves do not stand up to elementary logic and are patently false, as proven by thousands of well-respected professional researchers from all walks of life – i.e., engineers, pilots, architects, and scholars from many disciplines. Even very early television reporting of the attacks raised disturbing questions that were quickly quashed (see this excellent recent article from Professor Graeme MacQueen and Ted Walter). To paraphrase the prescient Vince Salandria, who said it long ago concerning the assassination of President Kennedy, the attacks of 2001 are “a false mystery concealing state crimes.” If one objectively studies the 2001 attacks together with the language adopted to explain and preserve them in social memory, the “mystery” emerges from the realm of the unthinkable and becomes utterable. “There is no mystery.” How to communicate this when the corporate mainstream media serve the function of the government’s mockingbird (as in the CIA’s Operation Mockingbird), repeating and repeating and repeating the same narrative in the same language; that is the difficult task we are faced with, but there are signs today that breakthroughs are occurring.

Words have a power to enchant and mesmerize. Linguistic mind-control, especially when linked to traumatic events such as the September 11 and anthrax attacks, can strike people dumb and blind.  It often makes some subjects “unthinkable” and “unspeakable” (to quote Jim Douglass quoting the Trappist monk Thomas Merton in JFK and the Unspeakable: the unspeakable “is the void that contradicts everything that is spoken even before the words are said.”).

We need a new vocabulary to speak of these terrible things.