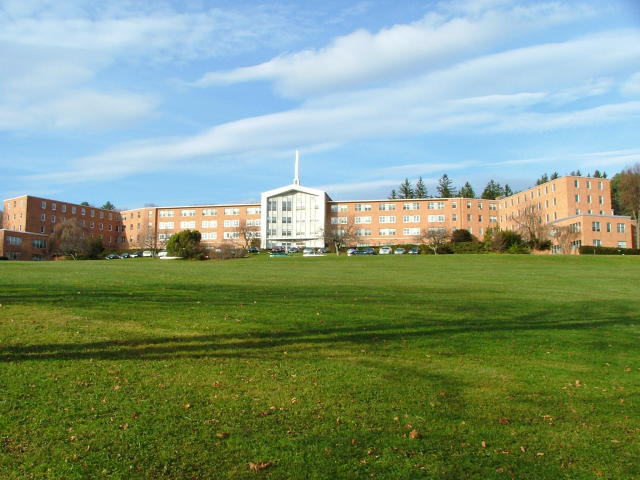 A new study by Williams College economics professor Stephen Shappard shows the vast economic impact on Berkshire County of the Kripalu Center for Yoga and Health in Stockbridge.

Stockbridge — “What would happen if Kripalu disappeared and nothing filled its place?” mused Williams College professor of economics Stephen Sheppard. “The difference,” he said, pausing to take a sip of his latte, which had been neglected for most of our conversation, “is that the local economy would shrink by about $64 million dollars.”

Amid growing concerns about rising rents, a lack of good-paying jobs and the diaspora of young people from Berkshire County, Sheppard has released a new study titled “The Economic Impacts of the Kripalu Center for Yoga and Health.” In his search for what makes a town thrive, grow and be a good place to live in, Sheppard’s study reveals some startling numbers, and a conclusion that may cause readers to see nonprofits in the area differently.

The new study, which was complete in May, is the result of a collaboration among the Williams College Center for Creative Community Development; a brain trust Sheppard created in 2004 with the help of a grant from the Ford Foundation; and the Stockbridge yoga and health retreat, Kripalu.

The 30-page review consists of the findings of a survey sent to 50,000 email addresses of Kripalu visitors, Sheppard’s own analysis, a treasure trove of data from Kripalu’s own records and an eight-page appendix. The data show that Kripalu directly or indirectly generates $64 million to the total economic output in Massachusetts with $56 million of it concentrated in Berkshire County alone. That’s larger than the impact of MASS MoCA and the Norman Rockwell Museum while just marginally smaller than that of the Clark Art Insitute.

In the summary of findings, Sheppard writes that, “The Center directly and indirectly generates about $7.5 million in increased tax revenues for state and local governments including $2.2 million in residential property taxes paid by Kripalu guests who have purchased and maintain homes to be near the Center.” Sheppard admitted that the findings raised the eyebrows of Kripalu management. “I was incredibly surprised by the magnitude of their impacts myself,” he noted. “If you live in the county, you think of Kripalu as this funky, interesting yoga thing.”

Nestled in the Berkshire hills of western Massachusetts, the Kripalu Center for Yoga and Health has operated since 1919, when the owner of the estate, Andrew Carnegie, died and the property was sold to Jesuits. During its early days as a novitiate and training center, Kripalu was a religious institution with over 350 members.

In 1999 the organization became a nonreligious, 501 (c)(3) nonprofit to gain tax exemptions for its contributions, donations and receipts. Today the center operates hundreds of programs each year from retreats, seminars and workshops on an annual budget of about $34 million. The center has 460 “active employees,” can accommodate roughly 650 overnight guests, and describes itself as “the largest and most established retreat center for yoga, health, and holistic living in North America.”

It’s no surprise that such an institution, while perhaps “funky,” contributes millions of dollars toward the local economy each year. But how do economists like Sheppard measure that impact, and what information lies behind the numbers in his study? In an interview with the Edge, Sheppard sat down to discuss the methodology behind his analysis and what people should take away from the conclusions he draws.

He explained the inherent uncertainty that comes with this type of project: “When you’re talking about an organization that already exists, you can’t really do a controlled experiment. We have a model for how the local economy works, and we know Kripalu’s budget is $35 million and that they produce services in the hotel and spa sector, the educational services sector and they have a big retail operation. We divided their budget up into those three sectors and supposed we make those sectors smaller by $35 million. Then we ask the question, ‘what’s the end result on the local economy?’”

The $64 million figure at the top of the study represents the total value of goods and services being produced, sold and traded within Massachusetts as a result of Kripalu’s existence.

When calculating the economic impact of visitors coming to Kripalu, the study found that the average Kripalu visitor from outside Massachusetts spends 2.8 days in the area and spends $69 a day while a visitor from outside Berkshire County spends $72 per day. Sheppard was cautious not to count what is called “displacement,” meaning he did not factor in Kripalu visitors who came to the Berkshires to visit another business but ended up at the center instead. The thinking behind this is that he does not want to count the loss of dollars that were intended to be spent at one business, but instead were spent at Kripalu, as a net gain to the local economy. This means that the economic impact of visitors on Berkshire County must be calculated from people traveling from outside the county and the impact of visitors on Massachusetts must come from travelers outside the state.

To find the impact Kripalu has on employment in the county, Sheppard’s model starts by “estimating the total change in output for each economic sector, and from that estimates the change in employment.” The model shows that 508 people are directly employed as a result of Kripalu and another 167 are indirectly employed by the center.

Standing by his work, Sheppard said he welcomes skepticism of his findings. He eagerly dug into “the weeds” of the study, explaining the research methods behind every data point. On the subject of taxes, he became visually energetic and animated.

One of study’s big reveals is also its least sexy: the tax revenues generated by the center. He noted that, because of its nonprofit status, Kripalu and other organizations that don’t have to pay property tax have historically been met with criticism over what some perceive to be a loss in potential tax revenue for the towns that support the nonprofits.

What Sheppard discovered in his email survey was that Kripalu actually indirectly generates over $2.2 million dollars in local property taxes via the property taxes paid by second-home owners who said they bought their Berkshire properties for the purposes of living near the center.

Sheppard sees a crucial lesson to be learned from this: that nonprofits operating in the “experiential” sector of the economy require consumers to travel and be provided food and lodging to accommodate their services. He believes these added requirements indicate that the raging opposition in Great Barrington over the new creation of hotels and short-term rentals should be reconsidered.

The professor, who conducted a similar study of the Boston Symphony Orchestra, has plans in the works for more research into other nonprofits including Berkshire Health Systems. For the time being, he hopes his study will shed a new light on the economic significance of Kripalu and inject data into the public discussion around the importance of other local nonprofits.

“I didn’t realize Kripalu was such a big player,” he chuckled before leaving to return to his home in Williamstown.