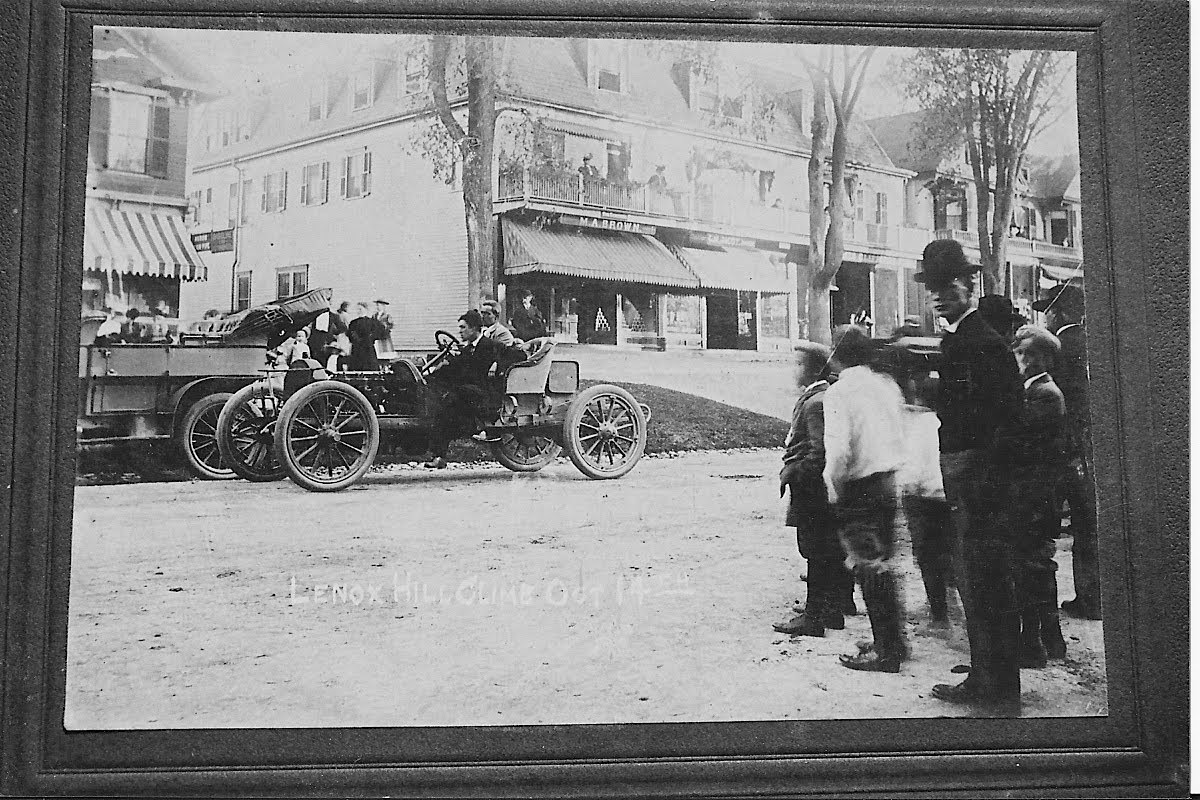 Floyd Knight drove a specially modified car (said to be a Stillson) in the Lenox Hill Climb in 1908 -- and ran it up a tree. Photo courtesy Lenox Historical Society

Great Barrington — Think of the Berkshires circa 110 years ago and, in all likelihood, you will conjure up images of Edith Wharton, the Vanderbilts, the Westinghouses, the Carnegies and the Morgans — the wealthy New Yorkers who used Lenox and environs as a summer playground and an escape from the stifling heat and noise of Manhattan. And of course, there are locals who served their needs.

But if there’s one thing the Gilded Age Lenox cottagers and the natives don’t bring to mind, it’s that they played a role in jump-starting the emerging automobile revolution. You heard that right.

Now, thanks to a new book by local historian Bernard Drew, we know that there were automobile storage facilities, road competitions and even innovative car manufacturing operations in the Berkshires. And we know that the cottagers embraced the industry with considerable gusto.

In a large-face softcover volume of some 300 pages, Drew has room to stretch out. Indeed, the cover is so expansive that he had the real estate to fit an impressively long title: “Well-Wheeled: How Cortlandt Field Bishop, Marguerite Westinghouse, Alden Sampson II and Gilded Age Lenox Cottagers Fueled the Brass Era of American Automobiling.”

The era began with the person whose records Drew used to form the nucleus of his work. Thomas S. Morse, a Canadian by birth and a carpenter, opened an automobile storage business in 1902 in a barn at the rear of his house in the center of downtown Lenox. At that time, most cars were open-top touring cars. Eventually Morse expanded his business to include repairs.

A year later, Morse started what would become a treasure trove of information for Drew: a registry of guests that included not only names, but places, destinations, vehicle makes and chauffeurs. Fortunately for Drew, even after Morse died, the buyer of his business, Oscar R. Hutchinson, kept the practice alive until 1922. The Morse/Hutchinson registry was provided to Drew by Thomas Vagnini of Richmond, a retired GE toolmaker and an automotive restoration specialist.

“The first year, there were 34 names and it keeps multiplying year after year,” Drew said in a recent interview. “So he builds a second garage.”

Drew had heard tales of the automotive doings in the old days in the Berkshires and he had always been interested. Yet even as a writer and historian, he never really wanted to tackle the subject until he ran across the registry.

“The ideal for a local historian is to come across some primary source material, and in this case, hardly anyone had ever seen [Morse’s lists],” Drew said. “They were the equivalent of hotel registries.”

The resulting research took more than two years and Drew says that he was still unearthing nuggets of information as he was finishing the book. It is, as Drew likes to say, a work of “local history with the documentation and detail found in a scholarly work.”

When Morse opened his garage in Lenox, the Curtis Hotel had been operating for some time and the now defunct Aspinwall Hotel had just opened, though it would later burn down in a fire in 1931. The Aspinwall property is now the site of the popular Kennedy Park. Both hotels attracted Gilded Age travelers. Aspinwall guests could even rent cars from Morse.

“The cottages were already in full bloom,” Drew explained. “Most people came up by train.”

Drew discovered that hardware and tobacco scion David Wolfe Bishop was the first to roar through the Lenox area in a production motor vehicle — in this case an imported 1898 De Dion-Bouton three-wheeler, later replaced with a succession of other French motorcars such as Panhard et Levassors, Mors and Daimlers.

Bishop’s older brother Cortlandt Field Bishop, whom Drew describes as an “over-the-top bon vivant,” acquired Citroen-Kegresse-Hinstin tractor-autos in the 1920s in order to mount a winter conquest of two of the county’s most scenic venues: Jacob’s Ladder and Mount Greylock. Gilded-era SUVs anyone?

The Bishops were merely early Berkshires aficionados of the motorcar, but after a period of mild skepticism, fellow upper crusters quickly adopted the habit, too. “One by one regular summer cottagers fell to the spell of travel freedom afforded by automobiles. Doctors bought motorcars. Factory presidents and managers. Bankers,” Drew wrote.

Other interesting people surface in Drew’s book, which is complete with historic photos of local buildings, vehicles, newspaper clippings and even images of Morse’s registry.

There is Alden Sampson II, whom Drew describes as “a young scorcher who became a promising manufacturer in Pittsfield, first of automobiles, then of rugged commercial trucks.”

And there was also Marguerite Westinghouse (yes, that Westinghouse) of Lee. She did not like to drive, but was “always a passenger … and ever a champion of Good Roads.” As you might expect, the lady with the recognizable name was fond of touring in a Westinghouse limousine manufactured by one of the companies owned by her husband George, an industrialist and inventor.

Also of note is that Drew’s research revealed seldom-told stories of vehicles in the Berkshires before their time: steam, electric and gasoline cars — even hybrids and vehicles that steer themselves.

Drew is giving a talk on the book Saturday, Sept. 14, at 3:30 p.m. at Ventfort Hall in Lenox. “Well Wheeled” is available at the Bookloft in Great Barrington, Shaker Mill Books in West Stockbridge, Herman Melville’s Arrowhead in Pittsfield, and The Bookstore and The Mount, both in Lenox.

Drew grew up in the Berkshires. He is senior associate editor of the Lakeville Journal in Falls Village, Connecticut. He has written “Our Berkshires” columns for the Berkshire Eagle since 1996 and is an Edge contributor. Drew has written 35 Berkshire histories as well as two dozen popular literature reference books. He and his wife, Donna, a retired teacher, live in Great Barrington and raised their two daughters there.