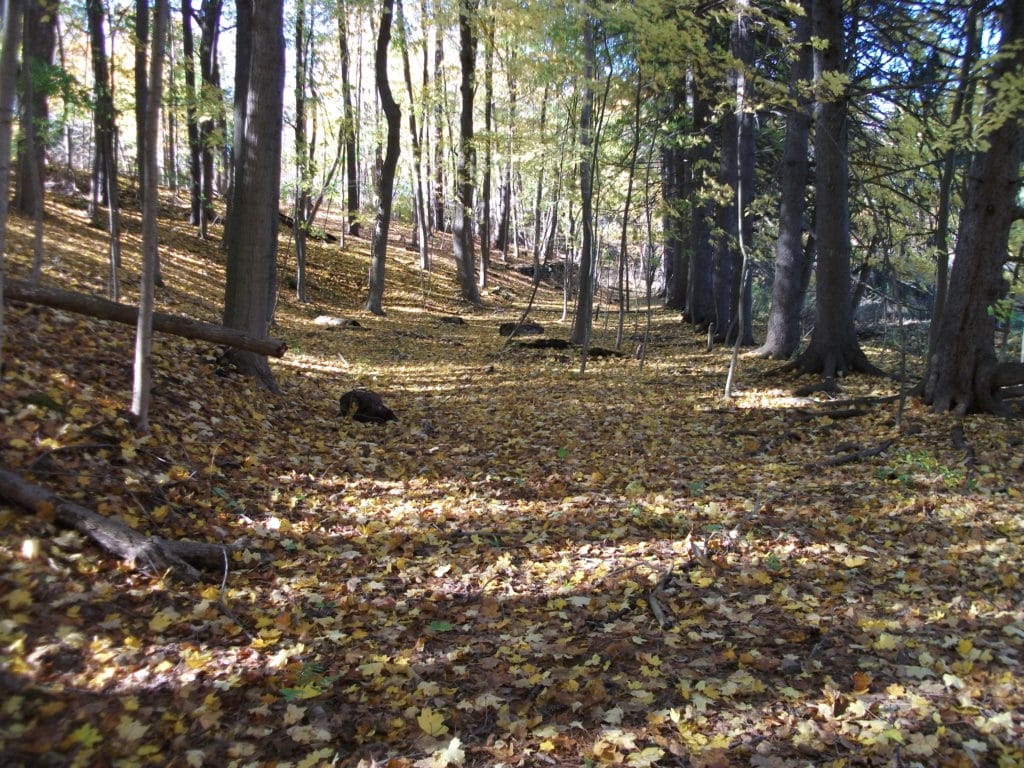 Bernard A. Drew
A road to nowhere, this section of what became Route 7 is now hidden on the grounds of John Dewey Academy, behind the Great Barrington Police Station. It was part of the Knox Trail at the time of the American Revolution. The stone retaining wall is in the distance. Modern Route 7 is above and to the left.

The repaving of Route 7 from the Brown Bridge to Belcher Square in Great Barrington — a weeklong project that begins Monday, June 16 — and the major reconstruction of Main Street from Cottage to Taconic Avenue that will begin, we’re told, after Labor Day, give an excuse to look for the original settlement roadway through the village — the road used, for instance, by Henry Knox to transport Fort Ticonderoga cannon to Boston in 1776.

The first road has been reshaped over the years, wiggles ironed out, humps smoothed. You can still experience most of it, however, from the sidewalk. A quick tour is best accomplished on foot, not because of the reconstruction, but because many of the details are difficult to see from inside a vehicle.

Let’s start at the south end.

The road from Egremont came into Great Barrington not entirely along the present Route 23. It went southerly of the 1895 Newsboy Statue and down Silver Street before veering north. Mount Petra, the rocky bump across from Manhattan Pizza, was a village landmark. A Liberty Pole was defiantly placed on its peak 28 June 1774, in protest of what many in town considered to be harsh British rule.

In those days, the road turned at Mount Petra. It went through and behind where the Great Barrington Police Station sits, down to the wet Searles Castle meadow before rising to grade again in front of the Southern Berkshire Chamber of Commerce Information Booth.

Historian Charles J. Taylor described this section of road: “In front of the residence of Ralph Taylor [now Finnerty-Stevens Funeral Home], the road descending into the ‘Great Hollow,’ ran nearly on a level with the adjoining meadow; the meadow itself was a morass, almost impassable, and known as ‘Ash Swamp;’ into this swamp a brook from the hill-side at the west, discharging its waters.”

“This hollow was long held in ill repute by the early inhabitants, amongst whom a legend of an Indian child murdered by its mother and cast into the swamp had obtained credence,” Taylor continued. “The superstitions of the time people it with hobgoblins and ghosts. It was said, and by many believed, to be haunted and rumors were common of strange sights and frightful sounds arising from the swamp, which here bordered the highway. It was a place to be avoided in dark nights by the timid. The hill to the south of this hollow was much steeper and higher than now, and to the north the high bank south of the Misses Kellogg house [Searles Castle], as is still evident from its contour, continued directly across the road, presenting a formidable barrier to travel, and terminating in a high sandy knoll ….”

If you are on the sidewalk looking at the Cross Pond at Searles Castle (today home to John Dewey Academy), go to the southern extremity before the concrete wall resumes. Look down, but don’t lean on the iron rail, it may bend over. Below you should see through the foliage hints of the old road and a retaining wall.

A few years ago, with the permission of the late Dr. Thomas Bratter, Dewey Academy owner, I clambered down the embankment to walk on the original roadway. There’s considerable retaining stonework on the west side. The old wall disappears directly into the huge stretch of fill. I followed the road south to another bank of stones and soil, behind and under the police station.

Where the old road emerged opposite South Street, Taylor said “a ledge of rocks obstructed the track, rising several feet in height on either side, with but little more than room for a cart to pass between.” This obstruction was removed in 1815, when George H. Ives “widened the traveled way through the hollow in the south part of the village, built a side wall, and raised the road bed six feet.” Some of the retaining wall is still visible in front of the funeral home, beneath the planted flowers. It’s a remnant of the town’s first public works project.

Taylor added, “This road had been raised gradually until 1882, when the present [concrete and stone] wall was built [along Kellogg Terrace’s roadside, to keep out the noise of the Berkshire Street Railway cars], the expense paid partly by the town and partly by Mrs. [Mary] Hopkins. The roadway was raised from two to two and one-half feet and widened ten or twelve feet.”

As you see, there were often been disruptions to travel here.

The pavement of the downtown thoroughfare as it glides by the many three-story commercial buildings obliterates layers of history. Groups of militiamen (and a few of Rogers’ Rangers) stopped for meals at Aaron Sheldon’s tavern (where Subway is today), for example, on their way to upstate New York to skirmish with the French and Indians in the 1750s; their names survive on billeting records in the Amherst College Archive.

I remember street work years ago at the corner of Main and Dresser revealed, 6 or more inches down, a layer of brick-sized cobblestones. The old trolley tracks have disappeared, the rails recycled.

Main Street only became the commercial center after the town’s incorporation in 1761. Before that, most business centered at the upper end of the street, where Berkshire Bike and Board and Impoco’s Video are now. Fairchild’s 1794 map indicates David Ingersoll had grist and saw mills and a trip hammer on the water privilege next to the Brown Bridge. Hewitt Root’s tavern was across the way, in ye olden days. The Housatonic River crossing was originally a fordway, improved with a wooden bridge in the 1730s, outfitted with its first metal bridge in 1868. 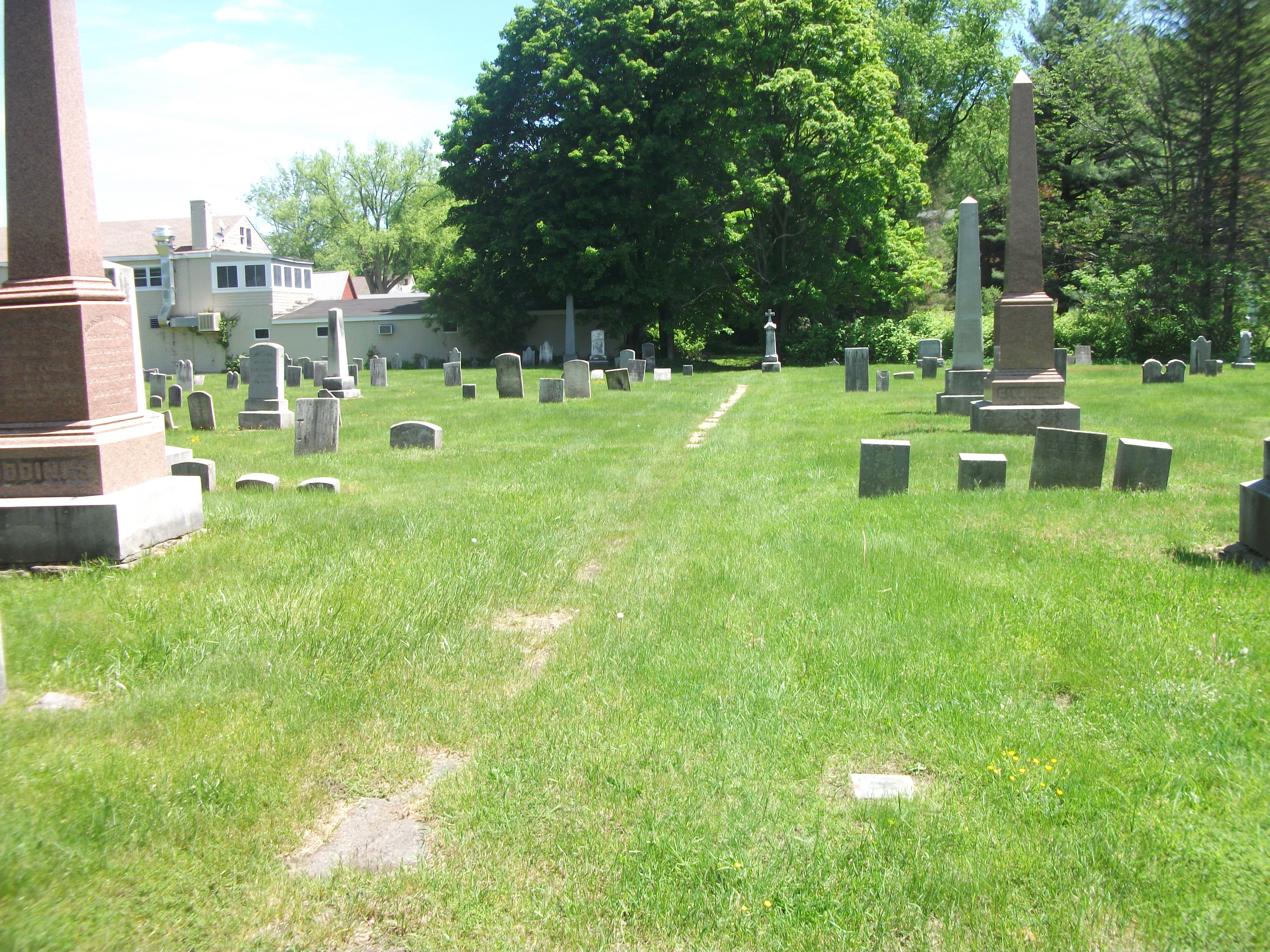 The Great Road in French & Indian War days in the 1750s traversed the Water Street Cemetery and kept going behind Pizza House before rounding Bung Hill to reach Belcher Square. Hundreds of soldiers from eastern Massachusetts trekked through here on their way to Fort Carillon (as Ticonderoga was then called) and environs. You can still see a trace of the path in the center of the photo.

East of the Brown Bridge the old road went into the present park beside the Water Street Cemetery where a stone commemorates the first meeting house of 1743. The road went behind Pizza House and gently back to Routes 7 and 23. A small section of the road between East Street and Gilmore Avenue was officially shifted northerly in 1811-1812 — another public works project — though the public disdained using the new roadbed for several years. You can improve our roads, but you can’t make us use them, people declared silently. Further improvements were made in the road from the Great Bridge skirting Bung Hill to Belcher Square in 1894.

A November 1794 map by “D.F.” (David Fairchild) shows the division of roads in Belcher Square: left the “Road to Lenox” over Monument Mountain, right the “Road to Boston.” Right is the ancient Indian trail, the Great Road, the New England Fur Trail, the Knox Trail, today’s Route 23.

The 1927 Knox Trail marker in Belcher Square, companion to an early 1900s Berkshire Street Railway gazebo, was slightly relocated on the triangle of land in 1994.

We need to linger in Belcher Square a minute. Just west of the Sunoco station and auto parts supply, there is a knoll. A double-sided billboard dominates the west end of the knoll, backed by the rock ledge of Bung Hill. If you clamber up the grassy bank you will find a wee cellarhole.

Charles Pixley built the small house in 1864, and sold it the next year to 10th Volunteer Infantry veteran Edward Joy Mallory and his wife, Maria. The 1865 deed describes one rear lot corner as being a “stake and stone in a cavity or seam in a ledge of rocks.” It wasn’t too far up the hill to the rear that Gil Belcher, the infamous counterfeiter, hid away his duplicating gear — until New York authorities, tired of seeing fake Yorker currency, swooped across the border and arrested Belcher and accomplices John Wall Lovely and “Dr.” Joseph Bill in December 1772. The men were executed the next year.

The Commonwealth of Massachusetts took the old Mallory place in 1946 as part of a major road improvement. It paid $1 for 210 square feet. The dwelling was removed. The roadwork widened and lowered the highway (that’s when it became known as State Road). Great Barrington’s 1947 annual report said “the completed boulevard on State road, from Great Bridge to Belcher Square… [is a] decided asset to our town.”

Expect the next annual reports to say the same about the present downtown redesign and repaving.