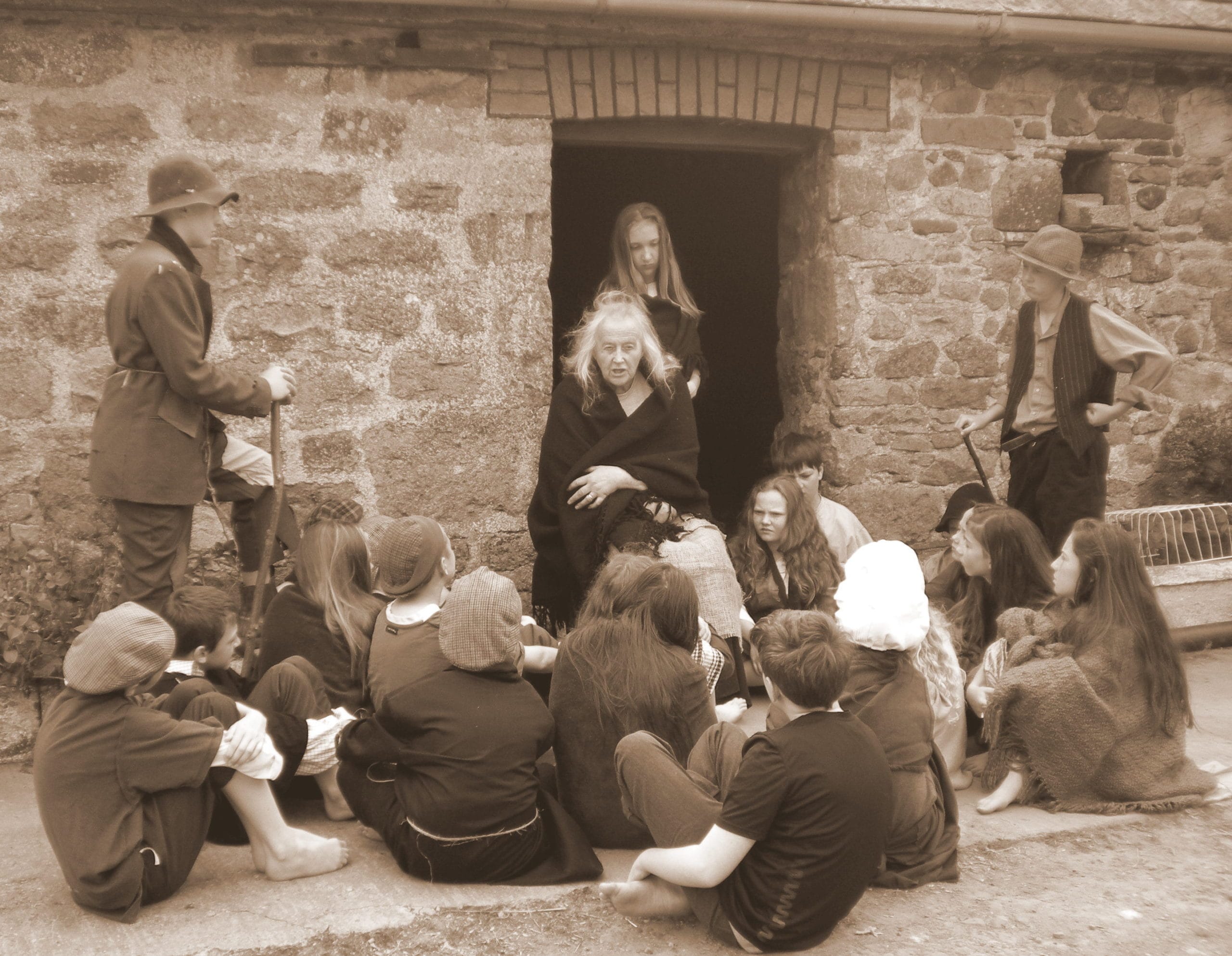 I’ve always loved storytelling. I remember, as a child, I would sit and quietly listen to my elders, particularly my grandfathers, tell stories for hours. I was not prone to interrupt or lose patience, as I found it all fascinating. All sorts of information would be passed along in this manner. I would learn about how they viewed the world and I would learn about relatives both living and dead. I’d learn about how they experienced the times they lived through, which would help explain how they came to view the world the way they did. Sometimes, I’d learn firsthand accounts of experiences, which would help explain events that shaped the world.

In 17th-century Ireland, storytelling became an art when practiced by a seanchaí, a storyteller who traveled from town to town. Ireland remained comparatively highly literate during the Dark Ages, thanks in part to having never been conquered by the Romans. However, when Ireland was conquered by the British in the 1600s, the British systematically went about suppressing Irish culture and education. In this way, the British, with the ever-present threat of brutal force, subjugated the Irish through ignorance and estrangement. Seanchaís traveling in rural Ireland were invaluable during these times, as they would spread news, provide much needed entertainment and, just as importantly, tell of the history, myths and legends of Ireland, keeping the people of rural Ireland in touch with their culture.

Although I don’t pretend to possess the storytelling art of a seanchaí, I do believe in storytelling as a way to inform and illuminate, just as when I was quietly listening to my grandparents when I was a child. Having achieved grandfatherhood, if there is such a word, for a number of years now, I feel the need, from time to time, to tell stories, especially given a platform like this from which to tell them. Here’s mine to tell for today, gratefully told without interruption.

I was brought up in the Unitarian church. It’s not a particularly well-known religion, so many people have asked me over the years what Unitarians believe in. In the Unitarian church in which I was raised, my irreverent answer is in the form of a question: Whatcha got? It obviously goes well beyond that, but it speaks to the liberal tradition of the church.

Our church in northern New Jersey was solidly liberal, socially and religiously, even by Unitarian standards. The Unitarian church has a long history of pacifism and nonviolence, so it’s no surprise I went to seek draft counseling from my minister after my 18th birthday in 1969. That year was a particularly difficult time to register for the draft, as it would come to be the second deadliest year for our troops in Vietnam following a major escalation of the conflict beginning in 1966-67. The times were fraught and the country was violently divided confronting a deadly conflict and a myriad of social issues boiling over after simmering for decades, not unlike today.

After my minister counseled me on applying for conscientious objector status when registering, we had a short discussion about spirituality, during which I asked my minister if he believed in God. His answer was he believed in a force, but couldn’t elaborate, as he had to meet a woman to take her to have a safe, albeit illegal, abortion four years before the Roe v. Wade decision in 1973.

In Sunday school we were provided a broad overview of the world’s religions mixed with teachings on ethics and humanitarian beliefs. The purpose was not so much to dictate a specific set of beliefs, but to provide school-age members an education from which to form their own beliefs. Another way to put it, from a 11-year-old perspective, was what I told my mother when she asked what I had learned in Sunday school one day. I replied, “Last year’s social studies.” My wise-guy answer was, of course, just that. I haven’t strayed far from that wise guy over the years, but at my present age, it’s generally described as a bit more socially acceptable irreverence.

With that introduction as context, my story begins on Star Island, an island in the Isles of Shoals off the 11-mile coast of New Hampshire, in the summer of 1965 when I was 14 and attending a Unitarian Universalist family retreat. Star Island still has strong ties to the Unitarian Universalist church and has hosted retreats for the church for decades. I attended this retreat with my best friend, Dave DeLuca, and his family. Dave’s mother was raised in the Jewish faith and his father as Catholic, so to avoid bringing their sons up in the strict religious backgrounds they felt they had endured, they chose neutral territory and joined the far more liberal local Unitarian church.

When learning of our trip to Star Island, Dave and I really had no idea what a retreat was, and if the DeLucas told us, we probably didn’t really listen. Upon arriving for the retreat, we were horrified when we were given a schedule of classes to attend. However, we were much relieved to learn the classes were, in true Unitarian fashion, optional. Being 14-year-old boys on summer vacation, we considered going to classes a few times but ultimately decided it was much more fun to explore the rocky coastline, dodge dive-bombing nesting gulls and flirt with the older girls working at the hotel.

A very sincere elder of the retreat attempted to counsel us on the educational and spiritual opportunities he felt we were missing, which we listened to just as sincerely. However, possessing the attention spans of gnats so often found in 14-year-olds, our sincerity was fleeting. We weren’t aware of it at the time, but this undoubtedly put us on the elders’ miscreant watchlist.

So it was no surprise, on the Fourth of July, while whatever lame adult festivities were occurring up at the hotel at the center of the small island, when we went down to the beach and began to set off the fireworks I’d smuggled in with my luggage, repercussions were to follow. The retreat’s elders rushed down to the beach to confront us and express their Great Disappointment in us. It was like disappointing Peter, Paul and Mary, Pete Seeger and Joan Baez all at once.

Although we weren’t officially thrown off the island, the DeLucas decided it would be for the best if we left. Dave, and me by extension, could do no wrong as far as his mother was concerned, so no further repercussions occurred, which allowed me to tag along on their next trip that summer to Washington, D.C., while they visited relatives.

Dave had been to Washington, D.C., several times and more or less knew his way around the city. So, in liberal Unitarian fashion, the DeLucas let us loose on the city for the day. We did what 14-year-old boys do and began the day visiting the pathology department of the National Museum of Health and Medicine to see how grossed out we could get by the extremely graphic exhibits. Afterward, we climbed to the top of the Washington Monument and ran down all the steps to the bottom without a care in the world.

As we began wandering around the city that afternoon, we came across a marquee emblazoned with “Gayety Burlesque.” In the middle of the entrance was a small box office, and on either side were posters of scantily clad women, sure to catch the attention of two hormone-laden 14-year-old boys. One poster was larger than the rest, and pictured an extremely buxom woman and announced the performance of Blaze Starr. We, of course, had no idea who she was, but the name stuck.

When we got to the window, he growled a growl from smoking too many cigars, “I was wondering when you guys would come over here.” We were in!

The matinee in that dark, worn, sparsely attended theater was not nearly as exciting as we imagined, consisting of a tired comedian performing in between fan dance and bump-and-grind performances attempting to replicate burlesque from a long-gone era. After a filler black-and-white movie of a volleyball game in a nudist colony, Blaze Starr took the stage. She strutted around, wisecracking with the men in the front rows while offering them a chance to “powder her boobies” with a giant pink powder puff. It was innocent fun, even then. She owned the stage and we found it funny to watch the men’s reaction to her offer.

It was only when I got home and was recounting my adventures in Washington, D.C., with my liberal- Unitarian-occasional-churchgoing parents that I learned that Blaze Starr was famous for carrying on a well-documented, long-term affair with the governor of Louisiana, “Uncle” Earl Long, in the 1950s. Earl Long was a member of the Louisiana Long family political dynasty who saw himself as a spokesman for the common man but never believed himself to be one. He was noted for entertaining his audience during stump speeches filled with creative and sometimes crude insults hurled at his opponents. News stories often referred to him as “the colorful governor of Louisiana” due to his sometimes-outrageous lifestyle and quotes. An example of one of his colorful quotes is: “Someday Louisiana is going to get good government. And they ain’t gonna like it.”

Ms. Starr was, of course, notorious within polite society, especially with Uncle Earl’s wife, commonly referred to as Miz Blanche, who apparently was as gracious as he was crude. However, after years of putting up with his increasingly erratic behavior and a year before his death, she had him committed to what turned out to be a series of mental hospitals while he was still governor. He left the final one as governor after ordering the replacement of the hospital administrator with one who agreed to release him.

For her part, Ms. Starr was wholly unrepentant. After she retired from the stage in 1988 when she was 56, she was asked whether she would have done anything differently. “Not a thing,” she replied, “I would just do a lot more of it and try a lot harder — and seduce a lot more men.” Later, the story of Earl Long and Blaze Starr was depicted in the 1989 movie “Blaze” starring Paul Newman as Earl Long and Lolita Davidovich as Blaze Starr.

It’s easy to see the parallels between Earl Long and our current president; however, a big difference is that Earl Long was effective in expanding many socially progressive programs such as free school textbooks, college financial aid and free medical care, programs unheard at the time and difficult to find now, especially in the Southern states. He also organized massive public works projects, which we’ve been ignoring for years now.

Now, if Melania were to only follow Miz Blanche’s playbook …