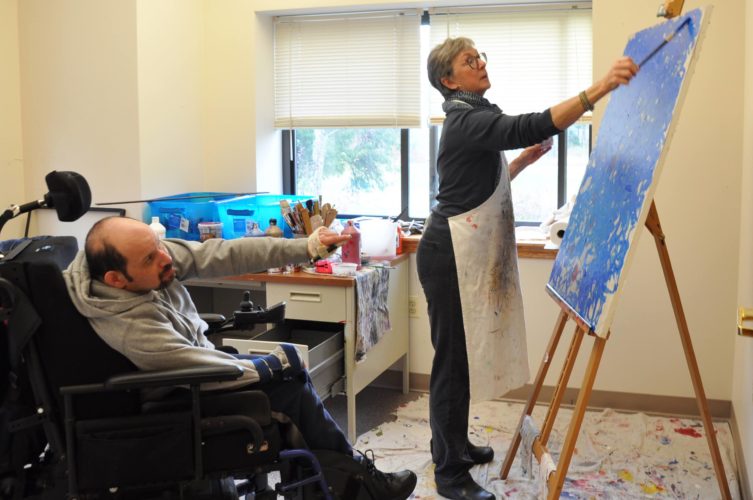 CATA artist Myles Tosk uses a laser pointer (a technique called A.R.T.) to show tracker Pat Hogan where to move the brush on the canvas. Photo courtesy Community Access to the Arts

Great Barrington — The coronavirus pandemic may have placed physical distance between families, friends, businesses, nonprofits and educational institutions, but that distance may have also provided one organization with a platform for a closer, more intimate look at the community it serves.

At the end of July, Community Access to the Arts launched its first-ever multimedia online exhibition that showcases the work of artists with disabilities via its website. Click here to view it.

The exhibit, “Back & Forth,” features the work of artists from the Berkshires as well as Columbia County, New York, using a technique known as Artistic Realization Technologies. With the adaptive method, an artist with significant physical disabilities uses a laser pointer worn on their head or wrist to direct the creation of the artwork. A trained “tracker,” who serves as the artist’s hands, follows the direction of the artist so that the vision of the artist is conveyed, said Stefanie Weber, who serves as one of CATA’s faculty artists and A.R.T. trackers.

“A.R.T. trackers serve as an assistant to those that are not able to create work with their own bodies. For most people I track for, they don’t have use of their hands or arms to do the kind of painting they want to do,” she said. “They have use of my body to move the paint around the canvas freely. I’m not a surrogate body, though, I’m communicating a process.”

Another A.R.T. tracking technique involves using “tracker points” and a long ruler/yardstick and a pencil. The artist communicates with the A.R.T. tracker to tell them where to stop on the canvas as the ruler is moved up and down on the canvas, said Weber.

Developed by Tim Lefens in the 1990s, A.R.T. empowers individuals with significant physical disabilities by giving them full creative control and expands the range of expressive possibilities for artists of all abilities, according to CATA executive director Margaret Keller, who added that CATA became aware of Lefens’ technique 15 years ago.

The staff at the time and Keller’s predecessor, Sandy Newman, worked to forge that connection with Lefens and engage in training in the process. Keller said she believes that CATA is one of only 20 studio programs in the country utilizing the technique. “Back & Forth” highlights the work of seasoned pioneers of the A.R.T. technique and artists who are new to the technique as well as the artists themselves.

“Over the past 15 years, we have really expanded how we’re using the technique and the artists who are working in the technique,” said Keller.

From the size of the canvas to the color of the paint and the movement of the brush, CATA artists control every aspect of the painting process, said CATA faculty artist and A.R.T. tracker Pat Hogan.

Weber and Hogan were both deeply involved in the painting technique that the artists used for the exhibit. Both have backgrounds in art: Weber in performance artistry; and Hogan has taught mostly watercolor and drawing, previously at IS183.

“You check your own wishes/opinions at the door [as an A.R.T. tracker] and become an extension of the artist that you’re working with,” said Hogan. “If I think a painting needs red, that’s too bad. It’s only going to get red if the artist thinks it needs red. We’re part of their tool kit.”

Though the artwork presented in this particular exhibit is abstract, it doesn’t mean that the intention is random, Hogan added.

Among the artists featured in the exhibit is Myles Tosk, who has been using this technique with CATA from the beginning. His work has been featured in Berkshire Magazine and been shown at several galleries, including the Berkshire Museum, the Lichtenstein Center for the Arts and the Worcester Art Museum.

Tosk likes to work with quite large canvases, and his work frequently features dramatic layers of paint and unpredictable compositions, according to Hogan, who has worked with Tosk as a tracker. In his piece featured in the exhibit, Hogan described how Tosk created “rich layers of color and texture, moving from the warm splash of yellow on the left to the cool blue on the right.”

Similar to Tosk, artist Mike Fazos took to the technique early on and has exhibited work at numerous galleries, including Hudson Hall at the historic Hudson Opera House and Good Purpose Gallery. Weber describes Fazos’ preference in painting as “broadly washed with color, almost as if scrubbing the color into the weaving of the canvas.” The color in the final product of the foreground may have four or five others spread underneath, she said.

His work is often inspired by nature and the elements. In the “Back & Forth” exhibition, Fazos is showing a 26-inch-by-25-inch acrylic on canvas titled “Christmas Storm.”

All of the works in the exhibit are professionally matted, framed and available for sale, with proceeds supporting commissions for individual artists. ​The artists represented in “Back & Forth” participate in CATA programs through Berkshire County Arc, Berkshire Family & Individual Resources, and Columbia County ARC.​

Beyond the virtual representation of the physical art, the A.R.T. artists and their individual work is elevated with videos, photos and additional artwork as well as poetry, according to CATA program coordinator Kara Smith, who curated the exhibit.

“With ‘Back & Forth,’ we’re sharing a deeper look at the work of CATA artists with disabilities than is usually possible at an in-person art show,” said Smith in a statement. “We hope that this exhibit will allow more people to connect with the talents and creative perspectives of people with disabilities.”

CATA partnered with Stockbridge-based web designer Mungy Studios to create the exhibit. “Back & Forth” is sponsored by October Mountain Financial Advisors​ with additional support from Mungy Studios, Berkshire Magazine, Frames on Wheels and the Massachusetts Cultural Council.

The exhibit also coincides and celebrates the 30th anniversary of the Americans with Disabilities Act, which was signed into law by President George H.W. Bush on July 26, 1990. The civil rights law prohibits discrimination against individuals with disabilities in all areas of public life.

“For me, the celebration of the anniversary connects these broader issues about inclusion and the arts, and about expression and inclusion as fundamental human rights,” said Keller. “The ADA was landmark civil rights legislation. I think a lot of times when people think about the ADA, they think about the width of doorways and the kind of nitty-gritty of the physical requirements required to make a place accessible, but the ADA is so much more than that. It’s about ensuring the rights of people under the law, it’s about ensuring that everyone has the ability to engage in public life, and the arts are fundamental to public life.”

The arts are included in the ADA. Keller says that the arts are fundamental in how people engage in their communities and express themselves within a community. That protection provided a critical link between CATA’s mission and purpose and the celebration of the signing of the ADA into law 30 years ago.

“A.R.T. is a technique that allows people with profound disabilities to become painters, that allows them to express themselves as artists,” she said. “I am hoping that they walk away with a newfound appreciation for the talents and abilities of all human beings. I am hoping they walk away with the deep respect and appreciation for the talents and abilities for the CATA artists who are in the show.”

“Back & Forth” will be available to view through Monday, Aug. 31.