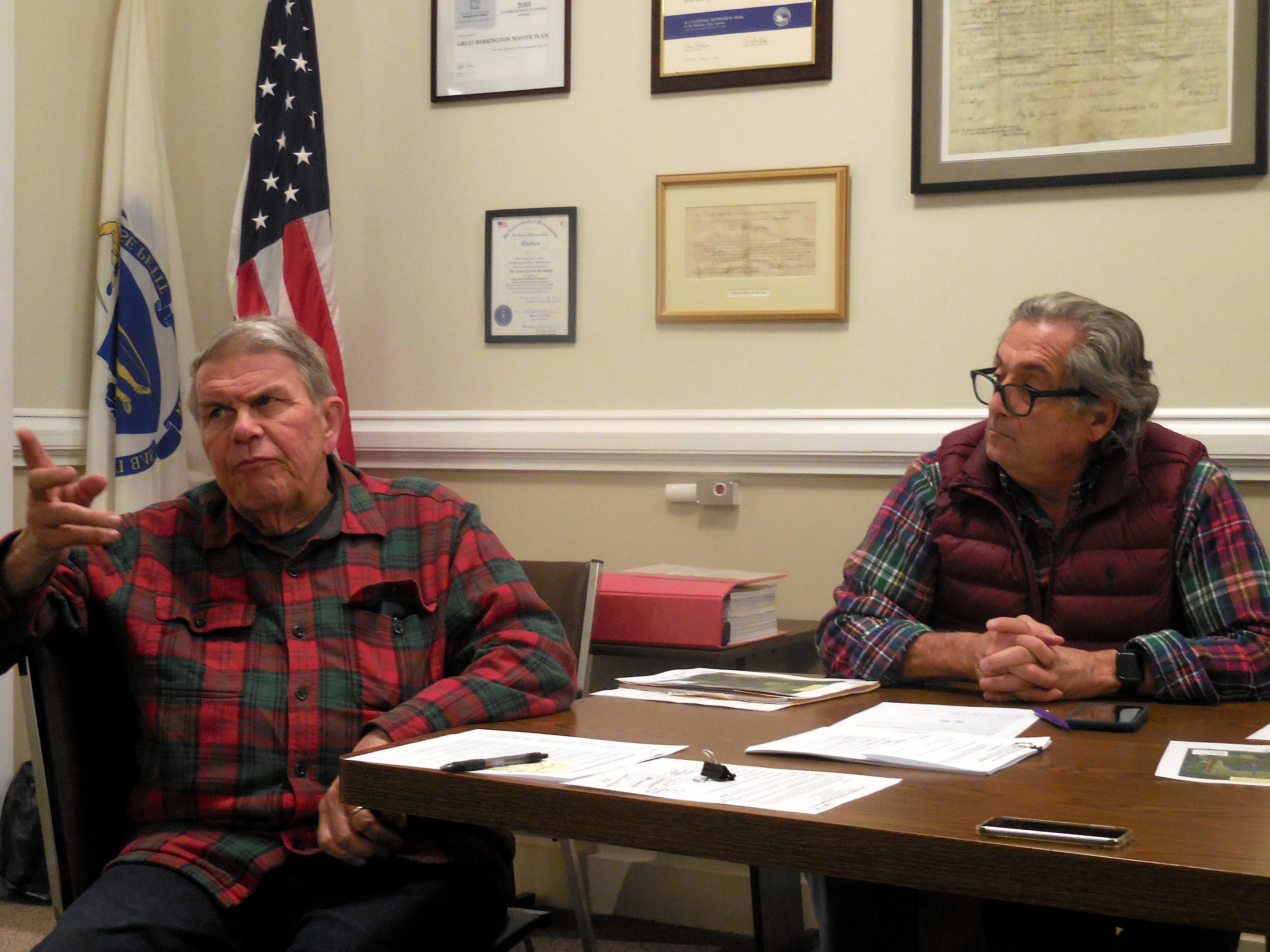 Furthermore, efforts to get the truth out about glyphosate has been stymied by tainted corporate research, its manufacturer Monsanto, and by an Environmental Protection Agency that is “dysfunctional at best.”

That was the message from Ed Stockman, a longtime farmer and GMO educator from Hampshire County who made a presentation to the Conservation Commission in town hall on Wednesday.

Stockman said the body of research on glyphosate, the active ingredient in the popular Roundup weed killer and the most widely used herbicide in the U.S., isn’t as extensive as one might think.

“I’m desperate for research,” Stockman said. “But it’s not going to happen at the government level with the agencies we have now.”

See video below of Ed Stockman’s presentation to the Conservation Commission on the use of glyphosate in combating invasive plant species. Click here to see Stockman’s PowerPoint document frame-by-frame:

Most of the research has been performed by either the corporations themselves or government agencies such as the federal Department of Agriculture and the EPA, which Stockman called a “captured agency,” meaning “captured by some of the businesses it seeks to regulate,” according to the Earth Institute at Columbia University.

The chemical behemoth Monsanto owned Roundup until the company was acquired by Bayer last year for $66 billion, at which point it became even larger. Stockman suggested Bayer and other corporations have an obvious conflict of interest in conducting or sharing research on their own products.

Stockman noted that while Monsanto has insisted that glyphosate is “safer than table salt,” the World Health Organization deemed them “probably carcinogenic to humans.” Monsanto withdrew the claim in 1997 after an order from then-New York state attorney general Dennis Vacco.

Still, Stockman added, “Both Monsanto and the EPA say it is safe … But Monsanto also said DDT, Agent Orange and PCBs were safe.”

Bayer also happens to be a major manufacturer of genetically modified crops, known as GMOs, which are often treated with Roundup. Stockman said GMOs are often resistant to glyphosate. That’s why it’s not uncommon to see healthy looking corn growing in a field alongside dead weeds. And since glyphosate is a systemic pesticide, it cannot be washed off of produce.

“With [traditional] pesticides they could wash off or you could wash them off,” Stockman said. “You cannot wash off systemic pesticides. The chemical itself is in the plant. It’s part of the systems of the plant.”

Perhaps as a result, glyphosate residues are found in common processed foods, especially cereals and in grains used to make junk foods. Testing by the Detox Project found that Cheerios, for example, tested for glyphosate at 1,125 parts per million, almost three times the concentration found in Oreos, according to NOFA/Mass, an organic farming association. Click here to view a brochure from NOFA distributed at Stockman’s talk.

“I would love to test everybody’s urine in this room,” Stockman said, eliciting a few nervous looks. “Because in America about 86 percent of people have concentrations of glyphosate in their urine. That means it’s coming in and it’s going out. My concern is what’s it doing when it’s in there. And that’s where the research isn’t happening.”

Amid the doom and gloom, Stockman acknowledged that Roundup, a broad-spectrum plant and microbe killer, is not without its advantages: it’s easy to use, effective, relatively fast-acting, little training is needed to apply it and it’s “inexpensive in the short run.” Stockman quickly added that, “It’s very costly to poison soil in the long run.”

See video below of part 1 of the audience discussion with Ed Stockman:

Stockman traveled to Boston on Nov. 12 to testify with activists and lawmakers before the Joint Committee on Environment, Natural Resources and Agriculture on a legislation that ranges from banning glyphosate and other pesticides outright to limiting their use. Click here to view a House version.

State Attorney General Maura Healey and state Sen. Jo Comerford, D-Northampton, also testified, as did MIT scientist Stephanie Seneff, who has authored scientific articles about glyphosate and its correlation with human diseases, and Julie Rawson, the executive director of the aforementioned NOFA Mass.

Comerford characterized the bills discussed at the public hearing as “extraordinarily pragmatic.” Senate Bill 447, for example, would allow individual municipalities to ban or adopt stricter standards on glyphosate and other pesticide use. Stockman said state laws governing home rule petitions currently do not permit towns to ban glyphosate use.

“Several towns have banned it on town-owned property,” Stockman explained. “That we can do, but you can’t make a blanket ban in a community.”

One of the barriers to allowing towns to restrict or ban the use of glyphosate is that large public utilities such as Eversource use it to control vegetation beneath power lines and in and around power facilities such as transmission substations. Perhaps as a consequence, some lawmakers and activists have called for a statewide ban or prohibiting its use on public lands without a permit.

See video below of part 2 of the audience discussion with Ed Stockman:

When Cohen opened the floor to questions from the 25 or so people in attendance, Jes Murray Toro, co-owner of the Stockbridge-based Native Habitat Restoration, said the conversation about glyphosate should not distract us from the threat that invasive species pose to habitats.

Also attending were Michael Lanoue and Peter Stanton, both members of the town Board of Health. Lanoue, who chairs that board, was interested in talking with Stockman and perhaps having him speak before the board.

Great Barrington businessman Bobby Houston of the Green Tea Party said he would like to see an inventory of where Roundup is used in town. Houston was especially concerned with the use of glyphosate to combat weeds along the freight lines of Housatonic Railroad.

“As I understand it, there is a nearly wholesale application of pesticides and herbicides in railroad corridors,” Houston said. “The railroad running through our town is clearly a kind of Auschwitz for plant life and soil life.”

“The railroads are very difficult to deal with,” Stockman replied. “In Pittsfield, I fought them the whole time I was the conservation officer there. They think they’re omnipotent.”

Robert Kilmer, who owns Twin Rivers Farm, a dairy and feed corn operation in Ashley Falls, uses glyphosate on his farm. He was skeptical of the idea that it kills beneficial microbes and degrades the soil.

“I can guarantee you on my farm right now, my soil has never been more productive,” Kilmer said. “I have plenty of earthworms and microbes.”

Kilmer said most studies say Roundup is actually safer than the alternatives that were used in the past such as Atrazine, which does not break down as easily as glyphosate.

Cohen said the next step for his commission is to have a conversation around dealing with the frequent requests the commissioners have to manage invasives.

“One of the things we’ve tried to do is educate ourselves over the last few years and this is an opportunity in the future for us as to how we deal with invasive management,” Cohen said. “It’s a comprehensive issue. We pay a lot of attention to pollinators, restoration of habitat and we’ve got to try and put some of that together and do it a little more comprehensively.”

Municipal conservation commissions in Massachusetts were created, in part, to provide local enforcement of the state Wetlands Protections Act. For more information on the Great Barrington Conservation Commission, its authority and its mission, click here.