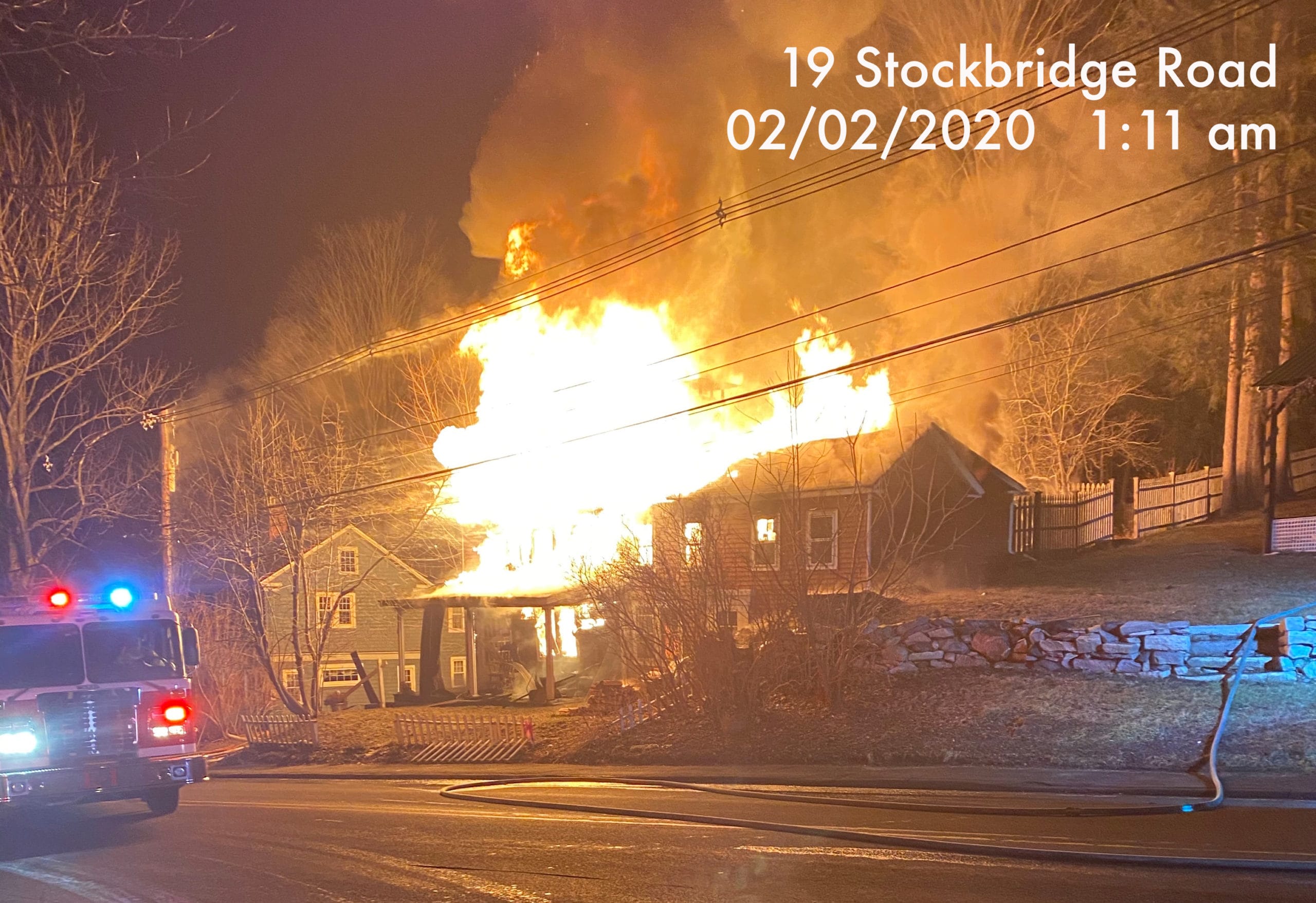 A home at 19 Stockbridge Road, West Stockbridge, awaits water as it burns in the early morning of Feb. 2. Photo courtesy Steve Traver

West Stockbridge — Following a months-long ethics scandal and questions raised about his leadership style, the West Stockbridge fire chief was relieved of his command at a contentious select board meeting Wednesday, prompting the department’s remaining members at the meeting to walk out with him in solidarity.

After the motion to place him on leave passed, Skorput walked angrily out of the meeting room in Town Hall, followed by other fire department members and supporters.

In making his motion, Shimelonis held aloft a photograph taken by Traver of a Feb. 2 structure fire overnight at 19 Stockbridge Road. The house was fully involved and, fully an hour after the fire department’s arrival, firefighters still had not brought sufficient water to the scene, in part because a tanker shuttle had not been set up to relay water to the burning house from nearby Card Pond. For his part, Skorput denied the allegations of insufficient response.

In an interview, Shimelonis said some of the fire chiefs of departments that had responded through mutual aid had expressed concerns about the performance of the West Stockbridge Fire Department.

“They had witnessed a level of dysfunction,” said Shimelonis, himself a former West Stockbridge firefighter. “We kept seeing the same problems happen over and over again and did not get acceptable answers.”

Shimelonis said three other fire departments — Great Barrington, Lee and Richmond — subsequently took West Stockbridge off of their alarm cards, meaning that they would not ask West Stockbridge to respond to mutual aid requests from their towns.

Shimelonis said Traver will be acting chief for a month or two, but he added that the mass resignation that appeared to happen last night might not have materialized after all.

“The news today was that it was not a mass resignation,” Shimelonis said, adding that he could not yet be more specific. “We’re still assessing the numbers. Members have communicated with me that they really care for the town. They’re certainly hurt by this but they are also willing to listen.”

“My hope is we can get them back,” added Fallon.

Fallon said he abstained because he would have preferred that Skorput not be placed on administrative leave and that he was satisfied that the chief was making sufficient progress in addressing the concerns of the board. In addition, Skorput and his firefighters would be difficult to replace.

“We’re a town of 1,300 people. So the available pool is very small,” Fallon explained. “My number-one priority is protecting the town today. We had a department that did that.”

The available pool is even smaller, Fallon said, because West Stockbridge has such a high percentage of senior citizens. So staffing the 21-member department is no easy feat.

“I have made clear that I do not want money to be a barrier,” Shimelonis said.

Earlier this week, Skorput, a former selectman, agreed to pay a civil penalty of $5,000 to the State Ethics Commission, which had launched an investigation after receiving complaints about him.

In the settlement, Skorput admitted, among other things, to violating the state conflict of interest law by continuing to serve as fire chief after his election to the select board; deciding payment amounts for himself, his daughter and his nephew; voting as a select board member to reappoint himself fire chief; and terminating a firefighter who had filed a complaint against him.

On multiple occasions, the commission found, Skorput violated a provision of the conflict of interest law that prohibits municipal employees from acting officially in matters involving their own financial interests or those of an immediate family member.

Shimelonis has set up a GoFundMe page to raise money to help Skorput pay his $5,000 fine to the state. Click here to donate. The appeal reads: “In appreciation for Pete Skorput’s many years of service to the town, let’s relieve him of his $5000 fine.”

“This is business — not a personal situation,” Shimelonis said. “I feel bad for the man. He has served the town for a long time.”

Last year, Shimelonis announced his candidacy for the select board and narrowly defeated Skorput, who had served the fire department for 35 years, by a margin of 179-145. Shimelonis has also written about the town fire department in the Local Yokel, a town newsletter.

In his capacity as fire chief, Skorput was paid a stipend of $500 per year. His term would have ended in 2021. Skorput works at a stone quarry.

“This happened and it’s unpleasant,” Fallon said. “We need to move forward as fast as we can.”