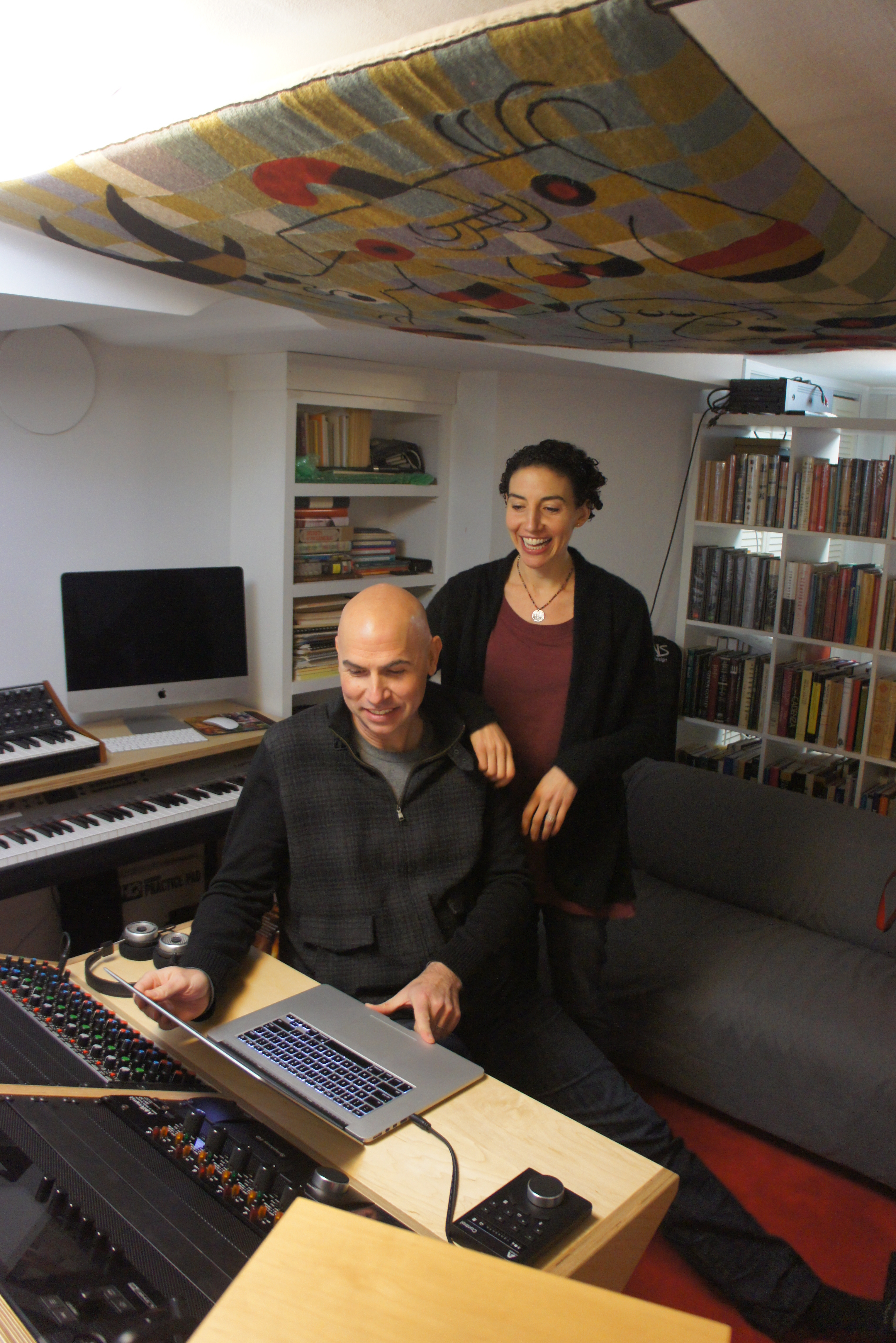 West Stockbridge — Rebecca Sheir and Eric Shimelonis had an immediate rapport when they met in 2013; despite hailing from Cleveland where the pair spent time living and working at the same time, they met in Washington, D.C., and following their first date — lunch on a Monday followed by coffee in the grass in Dupont Circle — “[we] sort of started [working together] informally right from the start,” recalls Shimelonis. To be exact she was working at WAMU, hosting the station’s local news magazine, and was in need of an instrumental version of “Mr. Blue Sky” (a song by British rock group Electric Light Orchestra) to be played under her intro; he, a composer and musician, saw her plea on FaceBook and just happened to be in a position to arrange and record a version for her. The rest, as they say, is history.

The couple, now married, left DC at the end of last year and settled in the Berkshires where their driveway is nearly as long at the city block on which they lived in Capitol Hill.  At present, the pair is producing Circle Round, a brand new children’s podcast in partnership with Boston’s NPR news station, WBUR — but their home studio’s proximity to Boston, located just a stone’s throw from the MassPike, had little to do with the project’s genesis.  Neither did their two-year-old son, Igor, but both location and circumstance have certainly influenced the 12 “rounds” Sheir and Shimelonis have produced this season — including the pilot last spring — and the plan is to complete 30 in total.

Circle Round is akin to an old-fashioned radio play where, according to the intro, “storytime happens all the time.” Sheir is the narrator and Shimelonis is the master of sound; what ensues, upon their collaboration, is an exploration of folk tales — both vetted and long term — from all over the world. “[We] make it our goal to present stories people don’t know — despite [the stories] being very well known in the native country,” says Sheir. She has spent countless hours scouting libraries and the Internet for tales that can be scripted in a way that highlights the couple’s approach, one that Sheir calls “purist and minimalist so the child can do more.” What they have stumbled upon, as new parents themselves, is “a great alternative to screen time,” according to Sheir. One that, in short, lets the kids imagine the dragon.

Sheir and Shimelonis are restrained, employing the bare necessities to create what Sheir dubs, “A movie for your mind.”  In each 10-20 minute segment, the listener is given bite-size morsels of “a satisfying story that’s distilled to its essence,” says Sheir. And the intended audience are listeners between the ages of 4 and 94. This week’s story chronicles a story known in Poland, Germany and India — although if you circle round on Tuesday afternoon you will hear the story of “Clever Manka,” in a version from the country once known as Czechoslovakia. The featured celebrity (each episode has at least one!) is Bridget Moynahan, the actress/model who hails from Longmeadow and was the one-time girlfriend of New England Patriot Tom Brady. For many of Sheir’s guests (she is the writer), Circle Round is their first experience performing for kids. All of the studio work is done remotely — Moynahan was laying down tracks from Tribeca — and “we had her go through it several times,” says Sheir. “By the end [Moynahan was] quite charming,” she added.

While Sheir can be heard reading opposite the likes of Jason Alexander and Sela Ward (to name just a few), Shimelonis carefully selects one instrument per episode — serving almost as another character — “chosen for dramatic contributions,” he adds, “so as not to overcome” the story itself.  He does both sound effects — children’s laughter or birds’ chirping — but his addition of underscore, music that adds to the drama and weight of the narrative, is his forte. His small basement studio boasts several guitars, a cello and two keyboards. A diatonic accordion sits on the floor, a folk instrument with Russian and Hungarian background, as well as set of Highland bagpipes. Within reach is a western version of an Ethiopian thumb piano — a mbira — which he had commissioned and arrived wrapped in German newspaper. And while Shimelonis prefers to use the real thing, he will “resort to really good samples,” when it comes to including Taiko drums, for instance, a 200-pound Japanese instrument tough to come by in Western Massachusetts. While the featured instrument for round 13 had yet to be determined when we met on Friday at noon, Shimelonis was flirting with the mandolin. The instrument choice is an opportunity to “respond strongly to how the story comes together,” he explained.

As to their working together?  “It is such a pleasure,” says Shimelonis, a self-described vinyl aficionado who sits in front of his audio console, clad in stocking feet, surrounded by thousands of vinyl records. The coupled launched their own business, Sheir and Shim, so they could work together and pursue their passions, all while affording them the flexibility to tuck their son into bed each night. Sheir enjoys working from the comfort of her own desk upstairs, and is a big fan of nap time citing, “that’s when the work gets done!”

And while this pair of curious adventurers has admittedly “drawn on the experience of every place [they’ve] ever lived — from New York to D.C. and LA,” says Shimelonis, his final words are apropos: “Thanks, 21st century,” he says with a smirk. Which I assume he says in a nod to this podcasting couples’ ability to be here, there and everywhere — without ever going anywhere.

Be sure to circle round for the next installment of this Berkshires-based podcast, Tuesday afternoon at 3 p.m. https://www.wbur.org/circleround