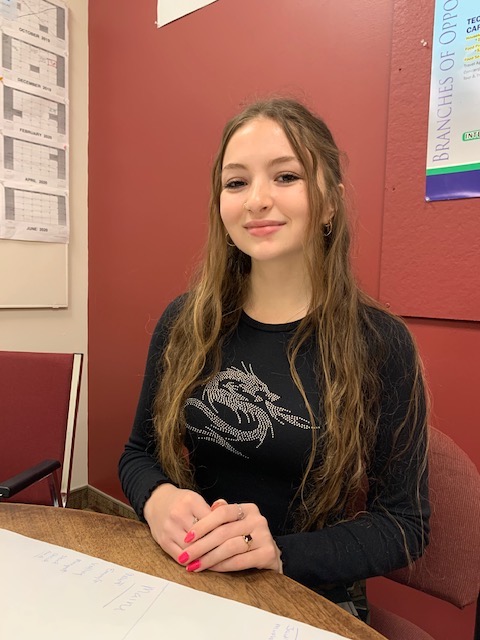 Great Barrington — The headline of the Monument Mountain Regional High School Wellness Initiative’s presentation to the school committee Jan. 9 might be: Health needs are central to the student experience, and ours are not being met.

The group, convened in September 2019 through a Mass IDEAS grant, is made up of CVTE and internship coordinator Sean Flynn; MMRHS adjustment counselor Pam Morehouse; MMRHS interim Principal Kristi Farina; Deborah Phillips of the Southern Berkshire Rural Health Network; teachers; health professionals; parent volunteers like Ellen Boyd and Bob Redpath; and three Monument students, including senior Sara Rawson. Charged with “developing a comprehensive plan in which wellbeing and self-care are central to the student experience,” the group’s been meeting weekly, and presented findings, recommendations and a vision for how health and wellness might one day infuse life at the high school.

While the team was quick to point out what Monument’s accomplished to date — training 32 students in leading Restorative Circles, offering yoga as an alternative to detention, a new Advisory program and an upcoming training by the Anti-Defamation League — along with dozens of community partner allies, it identified seven wellness categories at the high school level in which the district could be doing better: Physical Education, Substance Use, Mental Health, Commitment to School, Bullying, Diversity and Inclusion, Absenteeism and Commitment and Planning.

Taking the last item first, Monument has not integrated the Comprehensive Health Curriculum Framework set out by the state in 1999, or the strategic priority of using social-emotional learning as a core component. Massachusetts requires students to take physical education classes all four years, but it’s estimated that only 5 percent of Monument students do. There’s no wellness-focused, district-level administrator. A well-regarded ninth-grade health class implemented in the early 2000s was discontinued. The 2014-15 District Improvement Plan included a goal to support student and teacher social-emotional needs, but “Implementation steps toward this goal appear to be lacking at MMHRS.” Health is not mentioned in the 2019-22 District Improvement Plan.

With tobacco settlement money in the 1990s, a full-time health teacher, who remains in place today, was hired at the middle school. There’s an ambitious, multi-sector collaborative care model in place in the lower grades, which doesn’t impact the high school.

Among the group’s specific findings in the other priority areas, fewer students report not being bullied, which would indicate that more are experiencing bullying. Diversity and Inclusion have been of increased concern recently, with anti-Semitic threats at the middle school and perceived anti-Semitic writing found at the high school. The Anti-Defamation League is the key district partner on these issues, training students and teachers in their anti-bias curriculum that familiarizes students with how to become “upstanders” rather than “bystanders.”

Chronic absenteeism highlights and reflect our area’s economic inequities, with 20 percent of MMRHS students overall categorized as chronically absent, but 40 percent of low-income students. (These rates are down from the 2017-18 survey, when they were 41 percent and 57 percent respectively.)

A current student was quoted: “My brother graduated MMRHS two years ago and he is really struggling with vaping. He started at Monument when he was a sophomore. He’s tried to quit many times but can’t seem to stop.” To date, four Massachusetts residents have died of vaping-related illness, the most recent of whom reported vaping THC, the psychoactive compound found in marijuana.

In a related trend, 54 percent of 10th-graders report depressive symptoms. Berkshire County has significantly higher averages for death by suicide than the rest of the state. The protective factors called upon by eighth-graders to offset risk factors — such as connection to school — seem to be lost by Grade 10. Just under 50 percent of 10th-graders report low commitment to school, and 43 percent feel their thoughts are not valued. As stated in the PowerPoint presentation, “Students are not engaged and do not care.”

In addition to the adjustment counselor who counsels students in her office, the high school hosts a Brien Center counselor once a week. Senior Rawson, who led the Jan. 9 presentation and has been the linchpin of the Wellness Initative, sees the connected problems of substance use and mental health as the group’s lead priorities, and is impatient to implement more options.

“I wish we had a cessation program, for students who say, ‘I want to quit, how do I do it?’ Students see posters that say, ‘Don’t Juul,’ and they’re like, ‘OK — and?’ I was talking to some underclassmen in front of a poster with a Juul and an X through it, and they were like, ‘What’s the point of this?’”

She sees a clear overlap between negative feelings and vaping. “Vaping is a symptom of other things: ‘I’m sad, I’m disconnected, I don’t fit it. I’m going to take up this thing and it’s going to bring me closer to something.’ It’s not a clear separation, like some people Juul and some people are sad.”

To help kids access recovery options, Flynn suggests that the school might want to create “safe zones” where students who’d like to quit can approach the school nurse, adjustment counselor, guidance counselor or teacher, who would connect the student with resources. The success of safe zones, he stresses, would depend on how much the efforts are student-led.

For best practices, eight members of the team sought out “exemplar” districts to visit, and were led to Needham High School, where a full-time wellness coordinator ensures that district curricula are infused with CASEL (Collaborative for Academic, Social and Emotional Learning) frameworks, and tied to CDC (Centers for Disease Control and Prevention) standards. Students receive health education every year, and each year’s curriculum is themed. Rawson was most struck at Needham by how much students there enjoyed their wellness classes. “They had team-based activities, learned how to get uncomfortable. I thought, ‘One day, Monument could look like that.’”

Needham, the committee pointed out, has been working on health and wellness for 25 years, and Monument can benefit from its experience without reinventing the wheel.

Based on the best practices studied in that and other districts, the Wellness Initiative presented a list of recommendations its members would like to see enacted over the next few years: 1. Provide PE for all four grades; 2. Include wellness metrics on all BHRSD reports and plans; 3. Publish yearly progress report of District Improvement Plans; 4. Add a district wellness coordinator and wellness subcommittee; 5. Implement a Juuling cessation program; and 6. Discuss community service as a MMRHS graduation requirement.

Rawson was enlisted to address the “elephant in the room,” how to fund all these ideas, acknowledging, “We understand this will take a long time.” The town of Needham, school committee member Jason St. Peter pointed out, enjoys a median income — $141,690 — that’s more than double the median income — $52,026— in Great Barrington, adding: “We’re talking apples and oranges. I’d love to have Greenwich, Connecticut’s science program, but we don’t have Greenwich money.” Rawson, though, sees the sort of student engagement at Needham as free. “The buy-in is something you don’t have to pay for.”

Flynn acknowledged the funding disparity, responding: “We can’t be the Yankees, but maybe we can be the A’s or the Spurs. We can take some first steps, leverage our community resources.”

Among those community resources is the money collected through the community impact fees imposed on the new recreational marijuana industry, which are meant to offset the negative impacts of legalized cannabis. The Wellness Initiative recently applied for this funding through the town of Great Barrington. According to Selectman Ed Abrahams, there is about $200,000 available for organizations to apply for, and applications will go through the regular budget process, with townspeople weighing in at town meeting in May.

Other members seemed to indicate a willingness to prioritize health in the budgets for future years, and not make it grant-dependent.

Andy Potter added: “I’d like to see this work have a footprint in the budget. Otherwise, it’s great information and the exemplars are wonderful, but I’ve seen, over my four years, great presentation here and then not seen anything else.”

Member Richard Dohoney added, “Grants are for optional things and budgets are for our values.”

Bill Fields commended the group for its thorough hard work “on volunteer time,” and pointed out the good news in the survey results, such as the 63 percent of students who reported opportunities for pro-social involvement at school, and the 73% of seniors who say Monument is a good place to be.

It’s been a great place for Sara Rawson, who’s delved thoroughly into her interest in health in her final year at the school.

She became concerned in her junior year, seeing her peers using vaping as a stress reliever.

“I was aware of how addictive nicotine is, since my dad used cigarettes. I did an independent study on Juuling and vaping and wrote a research paper. I studied the chemicals that go into a Juul, and the marketing they use. Mr. Flynn asked if I’d be interested in helping out with the wellness team.

I thought it would be a group of students trying to plan little school things. I didn’t realize how important it would be. I don’t feel qualified. My first internship through RSYP, running their “411 in the 413” youth conference, I was like, ‘I have no idea why you want me to do this. I’ve only worked in retail.’ But then I did it, and it went really well. So I underestimate, and then it ends up OK.”

She’s been co-chairing the Southern Berkshire Health Coalition all year, along with the Wellness Initiative, and working to raise awareness of the many services and opportunities available to students, such as the presence of Community Health Programs’ mobile health van in the school parking lot every few weeks for free health care.

With other students, she’s also put together mobile ‘art carts’ to be brought into classrooms to integrate art more easily, so teachers don’t need to pay for supplies out of pocket or find a way to get to the art room. [Creative expression has been proven to improve mental health.]

In her internship this fall, she developed a website that compiles health and wellness resources for students, the next phase of which will be to display the scannable QR code for the site around the school building.

“Someone writes on sticky notes and puts them on the mirrors in the girls’ bathrooms: ‘You’re beautiful’; ‘Stay strong.’ I don’t know who does it, someone wonderful, but that’s inspired me to put sticky notes saying, ‘If you want to quit Juuling, here’s some resources. Scan me.’” Other ideas Rawson wants to put in place this year are workshops around sexual consent and providing free sanitary pads and tampons in the girls’ bathrooms.

She was surprised by how well-received the Wellness Committee’s presentation went and feels hopeful about getting through the group’s long list of priorities. “We have issues and we need to address them. Everyone in the building wants this to be a more well-rounded, happy place.”

Flynn agrees, and is setting high expectations for MMRHS and BHRSD: “We want the district to lead the way in what a rural school can look like. We think one day this will be a central part of our offerings for students.”