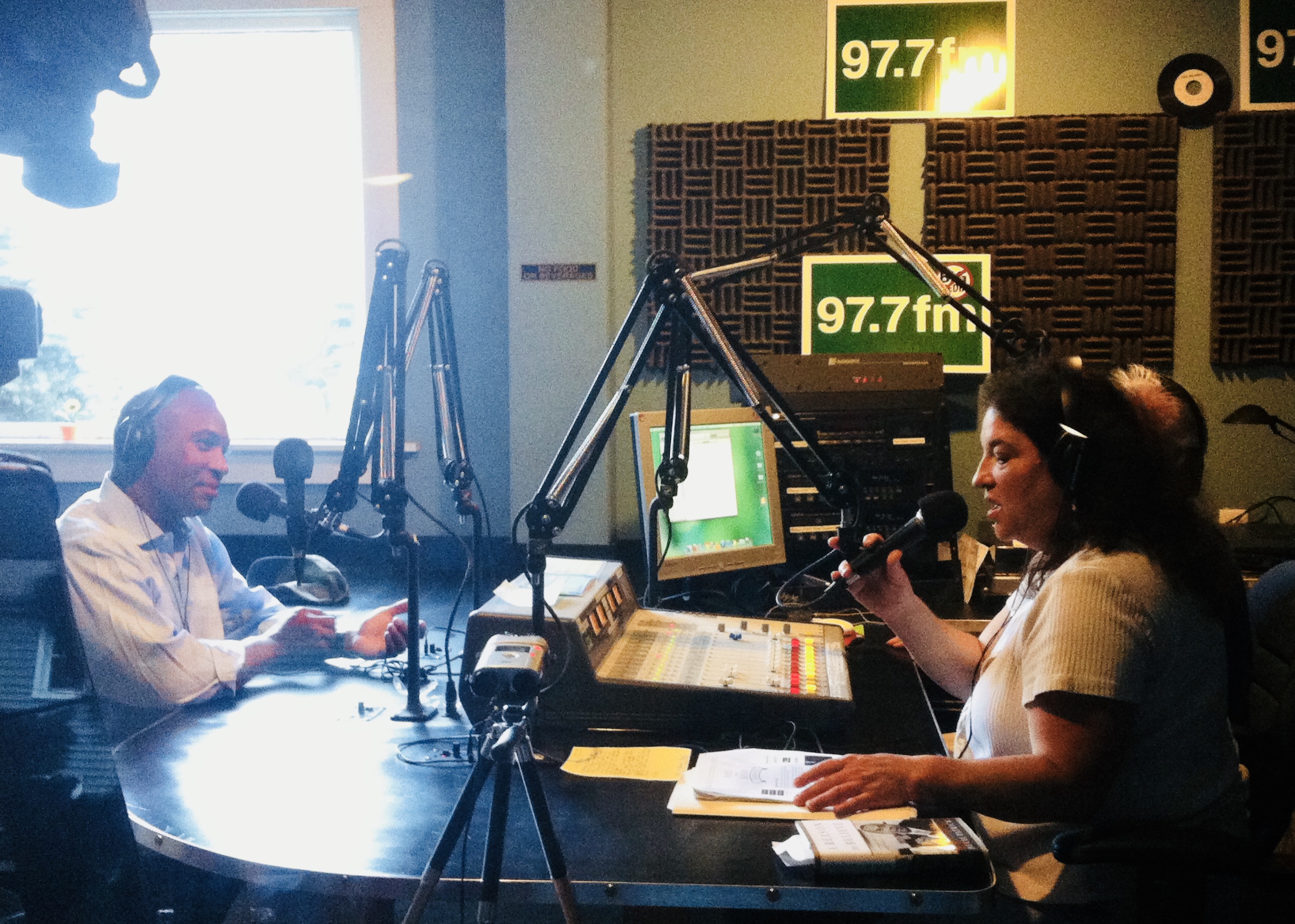 Great Barrington — It seems people these days are quicker to learn what Donald Trump tweeted at breakfast than find out who moved into the house next door. The exponential growth of the Internet and social media has completely replaced some of the social, cultural and economic pillars that contribute to the identity of a community. Movie-rental stores, music stores, local newspapers and radio stations are just a few of the information outlets some remember fondly from childhood, and some children will never come to know.

Thanks to the hard work of the dedicated members of the Berkshire Community Radio Alliance (BCRA) WBCR-lp 97.7 FM is gearing up to return from roughly a three-year hibernation with a new approach and the prospect of a new studio on Main Street. Long-time member Asa Hardcastle, said of the recent BCRA annual meeting: “The feeling, the energy, the desire to get this thing going has everyone electrified at the moment. It’s really just time.”

This intention is warranted given the station’s impressive history. What they accomplished with only a 100-watt antenna and a range of roughly 10 miles compared to the “unlimited spectrum” the new addition of podcasting will provide means far greater opportunities for locals, according to Hardcastle.

WBCR is the product of humble beginnings. Original members Nick Ring and Ann Condon applied for a Low Power FM license in 2001. With the help of pulleys, ropes and volunteers, an antenna was precariously erected on top of Fairview Hospital. Within a few years, they had over 90 locally produced shows that brought the likes of notable people such as Rosanne Cash, Ed Asher and Bob Costas. After more than a decade of success WBCR couldn’t keep up with demands of the vastly changing world of radio.

Jeff van de Visse joined the radio station around this time. “One of the reasons the town attracted me was the fact that it had a radio station,” Van de Visse says of his move to Great Barrington in 2011. After going through the application and training process he had a show for a year-and-a-half,The Happy Ears Show, an improv character-comedy show about “just being human” mixed with world music, before the station downsized to an automation system airing prerecorded syndicated shows. These were difficult times for passionate long-time members, but Van de Visse provides a unique perspective, being new to the area.

Without the same emotional investment as others, Van de Visse says, “I got to experience their grieving process. In the face of such hard times, I witnessed this new energy from the founders and volunteers who made some amazing decisions. It was like watching an old couple fall in love again.”

Hardcastle is one of the individuals Van de Visse is referring to when speaking of this “new energy.” WBCR contacted Hardcastle three years ago to consult about some equipment after he left the station six years prior to work for BerkShares. The dire situation was very apparent to the former member of the original board. “The idea of having this very special thing disappear or be sold got me back involved,” Hardcastle explained. “There’s just no way we can let this happen. We’ve worked too hard.”

With Hardcastle back on board they worked even harder to formulate a thorough business plan that demonstrates WBCR’s ability and willingness to evolve with the times rather then becoming a nostalgic conversation piece.

“People are listening to more podcasts and less radio,” said Hardcastle, acknowledging the brutal facts of their initial decline, “and some of it was people just didn’t know about us. There was never a lack of new programmers. Toward the end we just didn’t have the infrastructure to handle the training, because we were burning the fuel of the original members.” In spite of these challenges Hardcastle describes the new direction of the station as direcdted towar what he calls “modern radio which is mixture of terrestrial radio and podcasting.”

The station is compiling a portfolio of 50 podcasts and shows that will be followed by a KickStarter campaign to cover the first year’s operating expenses. “We are actively seeking to hire an executive director, and eventually staff. Our goal is to have a strong volunteer organization with an executive director who can help keep all the pieces together.” Year one expenses also include securing a Main Street studio location to have a visible presence in the community. Just how close are they?

“Let’s see,” Hardcastle begins counting in his Main Street office above Evergreen and Fuel in Great Barrington, “it might be in the next couple of weeks. We’re at 44 right now.”

Starting a radio show or podcast can be a life-changing event that with WBCR’s help doesn’t require experience but simply, an idea and willingness to learn.

Long-time member Graham Dean can attest to both of these requirements, and is also representative of what local radio can do to create and nurture amazing opportunities within whatever field, interest or passion one might have.

“I had never done a radio show prior to this,” Dean recalls with amusement of how he over-prepared for his first show. “I’m at a point now where I don’t need that anymore. If you have an idea you can present it. You can be trained. And you can get on and do a radio show.”

He and his wife, Barbara, had a show for more than 10 years called “Common Sense Songs” focusing on social justice and its role in music, particularly folk music.

“This opened a lot of doorways,” Dean noted, recalling how this program helped him create many fruitful relationships and experiences, including the time whenJohn Platania coming in to do a show. Platania is a well-known guitar player who has performed with Randy Newman, Bonnie Raitt, Natalie Merchant, Don McLean, Judy Collins, and is probably most recognized for being the guitarist in Van Morrison’s band and co-writing songs with him.

These are exactly the kind of success stories Hardcastle is preparing for WBCR to continue generating as the station progresses, and if the annual meeting is any indicator of what’s to come then Great Barrington should be prepared for a whole lot.

“We had a larger number of people show up than we had ballots,” Hardcastle said, smiling. “There is an art to telling a story and it’s not necessarily just an art. It’s a craft. I definitely do think it’s something we can help others learn how to do better.”

Hardcastle is particularly excited about having a good relationship with Community Television for Southern Berkshires (CTSB), where WBCR’s engineer, Chris Graham, is also one of their prime engineers. “There are shows that would be perfect for radio that are broadcast on CTSB,” Hardcastle explains, “and probably vice-a-versa.”

There’s also the advantage of being connected with a reputable licensed organization. “What the radio station brings that I find remarkable,” Hardcastle emphasizes, “is the fact that we are licensed and we have call letters. When we call someone for an interview and we say, ‘We are from WBCR we’re a low-power FM station in Great Barrington, Massachusetts,’ that means something. We get the interview.”

And with the addition of podcasting which Hardcastle likens to Netflix, “that validator means that our podcasters will have access to a much broader range of interesting people from all over.”

As WBCR’s listenership increases, Graham Dean insists that WBCR will remain focused on the needs and interests of the local community. “The media is controlled by five or six corporations and they control the messages that get out,” he said. “Independent local media is not subject to the same constraints and that’s why I think local media is so important. WBCR is a representative of the community.”

Having the news presented without the influence of hidden agendas often tied to financial, political or personal gain would certainly be welcomed in Great Barrington considering the turbulent times of national media. Hardcastle is a huge proponent for free speech and no voice being left unheard. “WBCR gives everybody a platform to talk about these things. My primary goal is to provide a platform where anybody can express ideas. This is a real shared community resource and that’s what I love. We’re looking for anybody who is interested. It’s kind of magical. It comes in through your windows; you turn it on and tune in. It’s magic.”

And WBCR is preparing to bring their magic back to the area, and beyond, very soon. Teaching radio is part of their mission. They’re looking to collaborate with local schools and the Railroad Street Youth Project. Also on the agenda for the near future is a new website, outreach programs, live event broadcasting, creating their own music festival and ultimately, a permanent location.

“I’m very excited,” Van de Visse observes of the revived station. “It’s open access for the community to have a space to communicate and interact. It’s an open vessel that empowers all ages and supports any kind of expression.”

If you wish to check out more information or apply to have a show or podcast visit berkshireradio.org, or if you care to join the conversation Hardcastle urges people to come to their weekly meeting. “We meet every Thursday morning at 8:15 a.m. at the Co-op. Anyone is invited. Please come.”