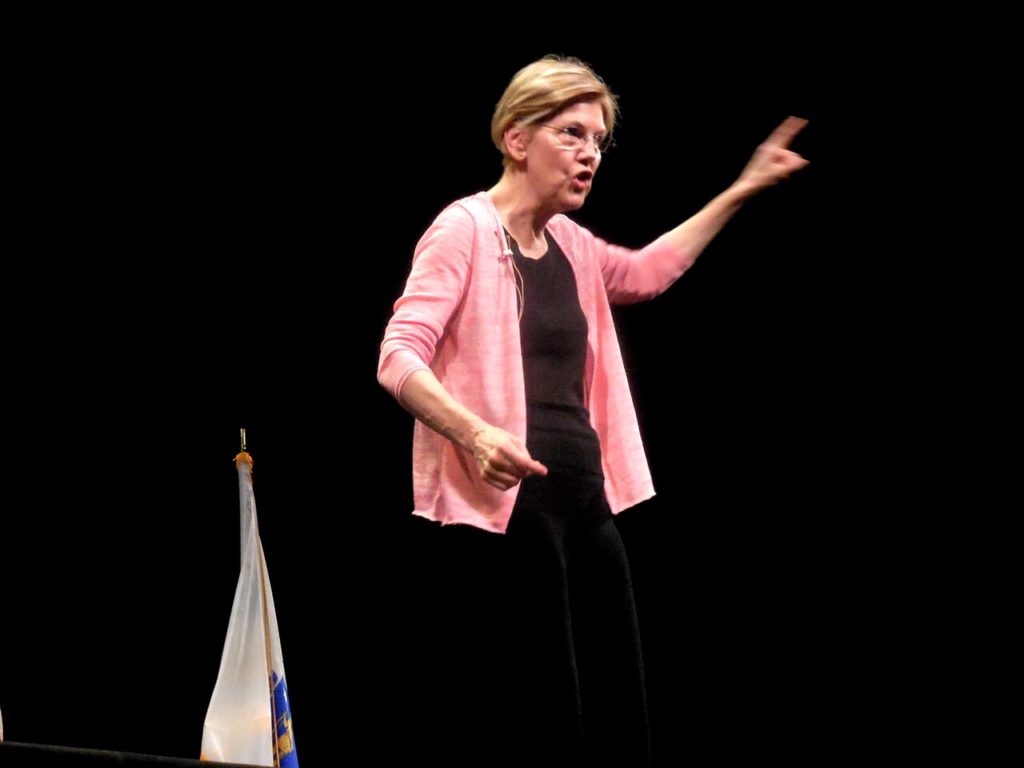 Terry Cowgill
Sen. Elizabeth Warren, D-Massachusetts, was in campaign mode and firing on all cylinders at her town hall-style meeting Sunday at the Mahaiwe Performing Arts Center in Great Barrington.

Great Barrington — Talk about a rock star. If James Taylor himself had made an appearance, he could scarcely have attracted more people than U.S. Sen. Elizabeth Warren, D-Massachusetts, did Sunday at the Mahaiwe Performing Arts Center.

Warren, who is running for a second six-year term to the U.S. Senate, came to Great Barrington for a campaign event that was dubbed by her staff as a town hall-style meeting. But it had all the trappings of a campaign event, with U.S. Rep. Richard Neal, D-Springfield, and state Sen. Adam Hinds, D-Pittsfield, speaking and rallying the troops for her.

The Warren campaign estimated more than 1,000 people attended the rally, including those at the packed Mahaiwe and the overflow crowd that could not be admitted to the 700-seat theater. She spoke to the latter group briefly from the gazebo in front of Town Hall. 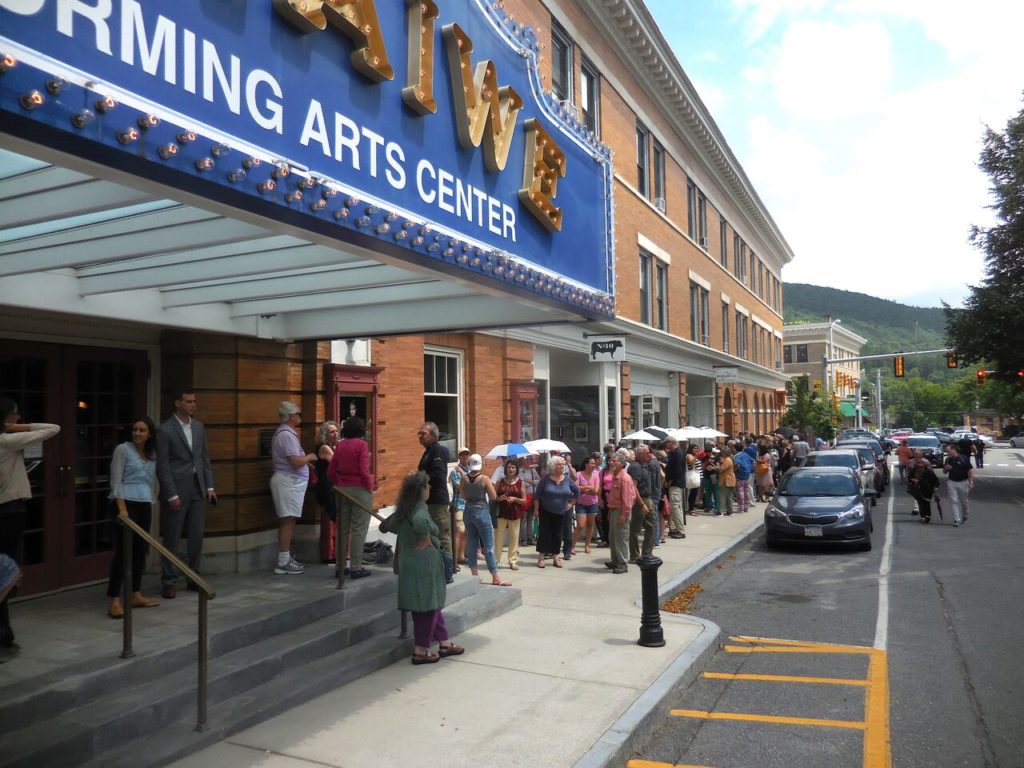 At one point, the line to get into the Mahaiwe Performing Arts Center to see Sen. Elizabeth Warren, D-Massachusetts, July 22 stretched not only to Great Barrington’s Main Street but around the corner and halfway up Railroad Street. Photo: Terry Cowgill

After Neal introduced her in the Mahaiwe, Warren had to wait for the applause to die down. When she was ready to speak, someone from the audience shouted, “We love you!” Warren’s response: “I love you, too.”

After praising Neal, the dean of the Massachusetts Congressional delegation and the ranking member of the powerful House Ways and Means Committee, Warren greeted the audience with “Welcome to Greater Barrington,” whatever that means.

Before taking questions from the audience, Warren riffed on life in the nation’s capital. “It’s hard down in Washington,” she said, before reminding everyone that Republicans are running the show.

It was a theme she returned to over and over again—the difference between Democrats and Republicans on matters of policy, especially where that policy concerns the disadvantaged and the vulnerable.

One of the questions came from Stacy Russell, who grew up in the Berkshires but now lives in the Raleigh, North Carolina, area. Russell served in the military, in state government and recently retired from the Department of Justice.

“I’m sad and disgusted and exhausted about what has happened in this country,” Russell said. “My question is: What is the Democrats’ plan for a platform?”

While she provided few specifics, Warren hit the ball out of the park. After thanking Russell for her service, the senator hammered home the notion that “Republicans are fine if 10 million people lose health care.” 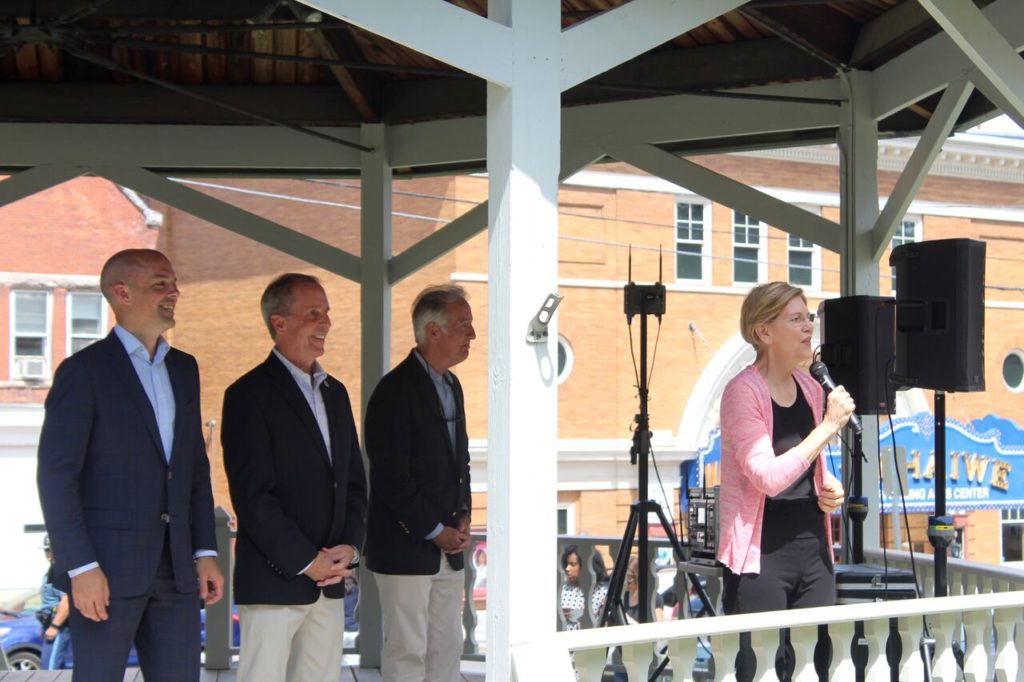 Another of Warren’s favorite themes is economic inequality and the answer she hears from Republicans who say they support some of her causes in theory (she listed fighting opioid addiction, saving health care for those with pre-existing conditions and forgiving student college-loan debt as examples).

“They say, ‘we know it’s a big problem but we can’t afford it,'” Warren said. “Why? Because they just gave away a trillion and a half dollars to giant multinational corporations and billionaires.” It was a reference to the GOP tax-cut bill signed last year by President Donald Trump. 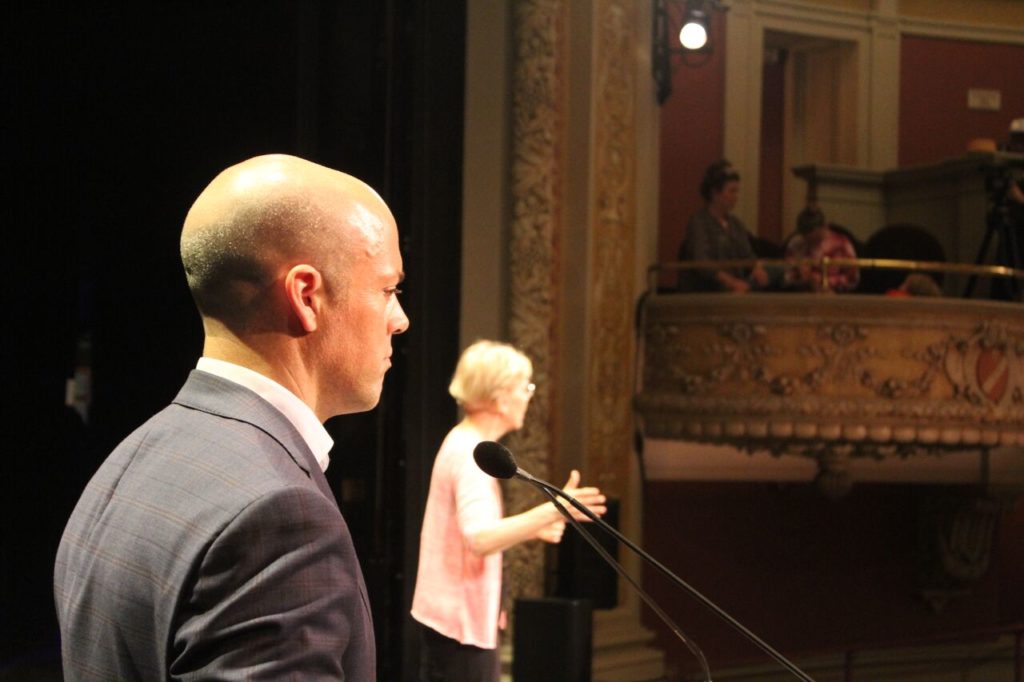 Both Warren and Neal spoke passionately about preserving the Affordable Care Act (aka Obamacare), which the Trump administration has attempted to weaken.

The event got off to an inauspicious start, as the campaign of Shiva Ayyadurai, who is running against Warren as an Independent, set up shop in front of the north side of Great Barrington Town Hall facing the Mahaiwe.

Using a bullhorn, Ayyadurai shouted anti-Warren slogans and called her a racist. His supporters were carrying signs that said “No to Warren.” They called her a fake Indian—a reference to her disputed claim of Native American heritage. At the gazebo, the group also spoke over Warren and attempted to disrupt her speech.

Before the action moved to the gazebo, an angry man crossed Castle Street and began taunting Ayyadurai, who, at that point, was still with supporters in front of Town Hall. The man shouted “resist” and “you’re full of shit” and then pushed Ayyadurai’s bullhorn into his face. Ayyadurai’s supporters promptly wrestled the elderly man to the ground before police arrested him.

See the video of a man approaching Senate candidate Shiva Ayyadurai and shoving Ayyadurai with his own bullhorn. The footage is courtesy of journalist and Ayyadurai supporter Marcelo Guadiana, who narrates the video:

Great Barrington police later confirmed that the man was charged with assault and battery and that he was scheduled for an appearance in Southern Berkshire District Court Monday morning (July 23).

Police declined to elaborate or reveal the man’s name but he was evidently released quickly because he could be seen near the stage in the Mahaiwe when the press gaggle Warren had held backstage after her question-and-answer session was over.

Back in the Mahaiwe, Warren insisted she was advocating for the disadvantaged, adding a couple of times that “I’m in this fight because it’s personal for me.” She grew up in Oklahoma in a family that was in economic distress:

“I grew up in a family that was paycheck-to-paycheck. We had some hard years. When I was a kid, my daddy had a heart attack. He was out of work for a long time. He ultimately ended up as a janitor. My mom worked in wait jobs.”

The idea of forgiving student-loan debt really struck a chord with her: “My folks didn’t have the money for applications to college, much less enough to send me off to school.” 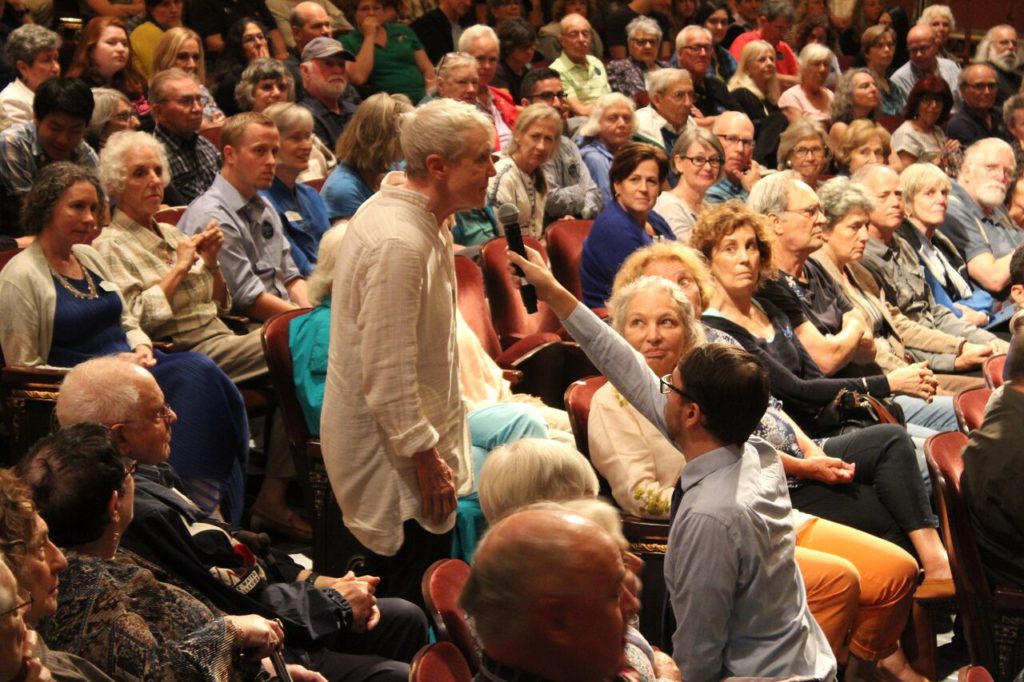 At a July 22 appearance at the Mahaiwe Performing Arts Center in Great Barrington, Housatonic resident Carol Diehl asked Sen. Elizabeth Warren, D-Massachusetts, if she voted for the most recent Pentagon budget. Warren said she did not. Photo: Terry Cowgill

Interestingly, there were few barbs that directly mentioned Trump by name, and only one reference to Russia. Neal at one point noted that there is a reason that, in the Constitution, Congress is mentioned first.

“[Congress was created] to keep a check on the executive, not to be servile to the influence of a Russian monarch,” Neal said to a mixture of laughter and applause.

Perhaps the most popular line of the night came in response Jennifer Daley, who said she was fed up with the emphasis on testing in public education and wanted to know what Warren would do about it.

“We could start by getting rid of Betsy DeVos,” Warren said without missing a beat. She was referring to Trump’s embattled education secretary, who many feel is unqualified for the job and unsupportive of public schools. But Warren said little about what specifically she would do to address the problems of public education.

Indeed, in the lobby afterwards, some who otherwise consider themselves to be supporters of Warren, lamented that she offered few specifics and instead went for easy applause lines such as the DeVos crack. 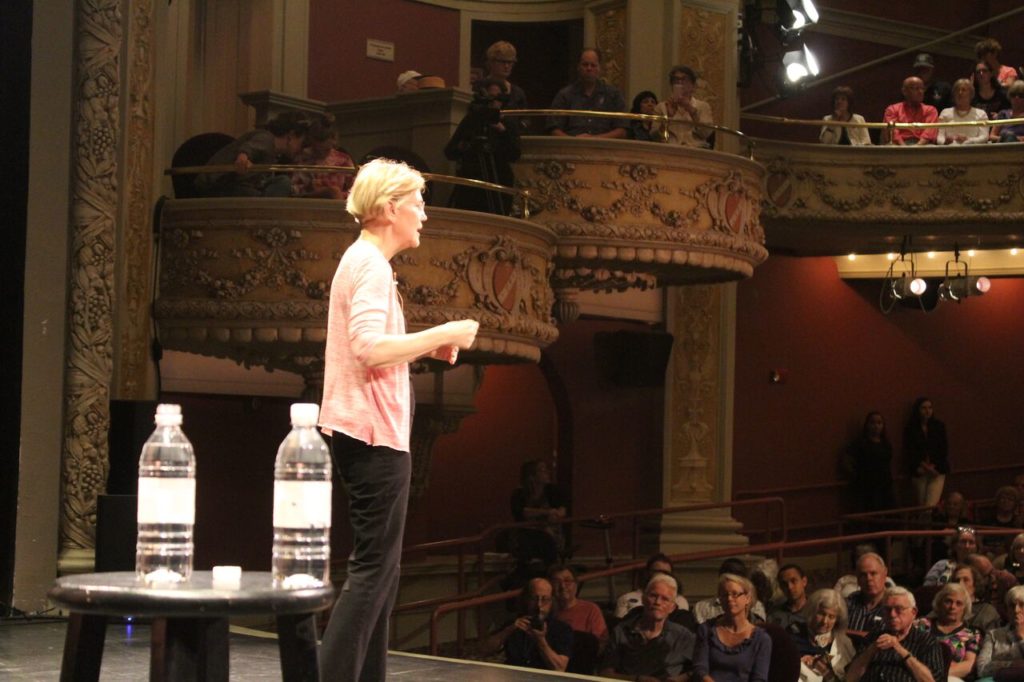 On the stage next to the podium sat some water in single-serve plastic bottles. The sale of those bottles was banned at the annual town meeting in May. The law will take effect next year but a repeal effort is underway. Jenny Clark, who spearheaded the effort to ban the bottles said she is sending Warren a reusable stainless steel water bottle.

Polls have shown Warren to be an overwhelming favorite for re-election. Her GOP opponent has yet to be determined. State Rep. Geoff Diehl, R-Whitman; Winchester businessman John Kingston; and Beth Lindstrom, a former chair of the state Republican Party, will square off in a Sept. 4 primary. The winner will face Warren and Ayyadurai in November.

Warren made a similar appearance in the Berkshires a little more than a year ago at Berkshire Community College in Pittsfield. Click here to read the Edge story and here to view the Edgecast of the event by videographer Ben Hillman.

— Joe Wheaton
Read next: EYES TO THE SKY: Mars peaks this week: Seek out Mars, now brighter than Jupiter