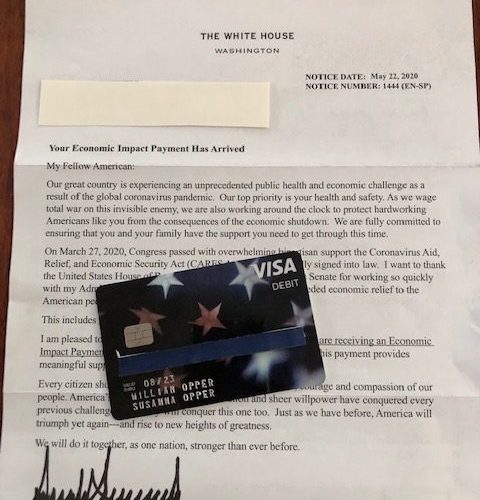 On the upside, my efforts to get our stimulus money into the bank may be the best compensated 90 minutes of my life. But I didn’t expect to put in any effort past entering my bank information on the government website before the May 13 deadline. I found out about that by asking the Google “where is my stimulus check?”

When I checked back on the site a week later, I learned that my payment was scheduled to be mailed May 22 and that it could take up to two weeks. It was a little past that deadline when a letter came, signed by Donald J. Trump, saying that my economic impact payment has arrived. But there was no check in the envelope. The phrase “by check/debit card” was printed next to the amount. Returning to Google, I found this very helpful CNET article that gave me an important clue. Some people were tossing their payments because they appeared to be junk mail. Searching my mail stack, I found an envelope from Money Network Cardholder Services in Omaha, NE. It was addressed to William Opper. My husband and I have different last names and that one is mine — not his. It sure did look like junk mail, but it was, in fact, the government payment.

The next helpful article from Forbes said we were not alone. Lots of couples with different last names were having this problem. And it was serious because only the first-named person on the card could activate it. But, in our case, that person doesn’t exist. The article suggested that it was worth ignoring this and entering the Social Security number and other information of the non-existent person. It might work, the article suggested. It did!

But I wasn’t done yet. The article recommended that if I got through this hurdle, I should immediately deposit the money in my checking account. The literature that accompanied the debit card didn’t mention that option. It said I could use the card to shop or get cash. Fortunately, a friend had told me the day before that her parents had done that.

So, I went to EIPCard.com where I needed to set up an account. That took a long time as it included the full gamut of security hurdles. And there was, of course, the listing of information I was supposed to check for accuracy. I figured I’d better leave the nonexistent person’s name just as it was. Don’t mess with success. Finally, I had set up my account. I chose to include the word “ripoff” as part of the password.

By now, you’re understanding the 90 minutes. It might even have been longer. My helpful article didn’t provide much detail on how to actually get the money into my bank, so I had to take a flyer on that. One option under “Money Out” was “Transfers in U.S.” I clicked on this odd phrase and, sure enough, I found the secret door. The final challenge was what name to put on this form. I gambled that my name would work since it was on the card and also on the bank account. I didn’t want my bank saying, “Who is this William Opper?”

So why am I telling you all of this? Because some or all of it might happen to you. But the larger question is, what’s really going on here and why has there been almost no mention of it in the media?

I wish I had answers. But all I have is questions. How did all this happen in the first place? Why were the names messed up on the card when our names were correct on the letter? Why didn’t they just do direct deposit since we get Social Security from the government that way every month? Does the right hand not know what the left hand is doing? How do people who are not as computer savvy (and patient) as I am even make this work? Who is benefitting from all of this? Who is helping those who can’t figure it all out?