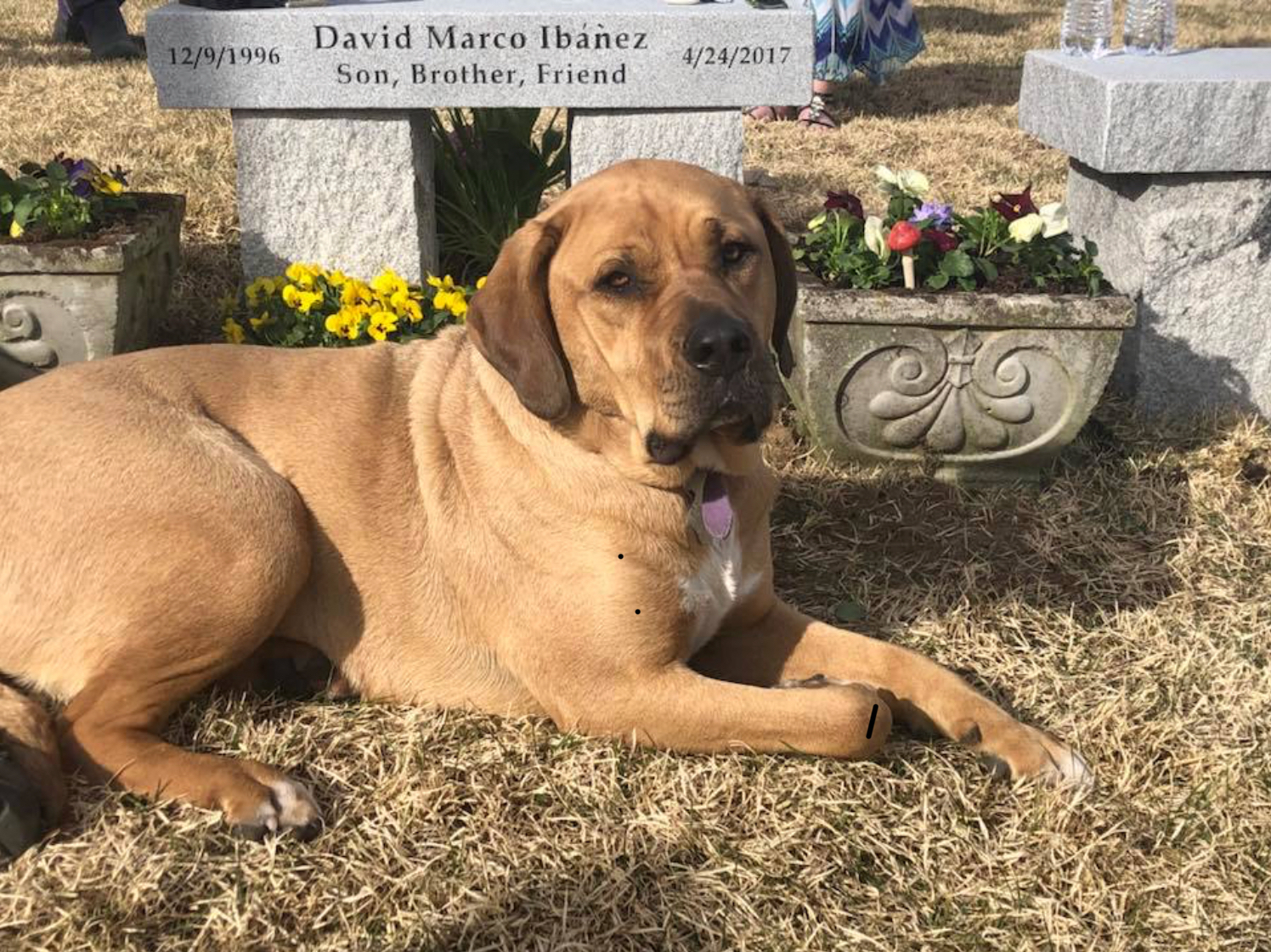 Tuukka Rose, the dog of David Ibanez, who died by suicide in 2017, rests on his grave. Photo: Valerie Zantay

Great Barrington — Valerie Zantay recalls with clarity the day she and her 17-year-old son Googled “suicide survivors” together: In the wake of her son’s own attempt to take his life, the pair were searching for stories of hope from individuals who had tried to harm themselves and lived to tell about it. Unfortunately, their query yielded little help, instead revealing a community of people whose lives had been affected by the death of a loved one by suicide. A scant three years later, Zantay’s son David had died of suicide; today, his mother is speaking out with hopes that sharing her story will get people talking about a subject that is all too often shrouded in darkness. “It can’t be swept under the carpet anymore,” said Zantay in a recent interview. “Suicide is becoming an epidemic … a contagious kind of problem,” she said, reflecting on all she has learned and experienced since her youngest of three sons died in April 2017. On Saturday, Sept. 29, Zantay will be walking in memory of David with Team Tuukka in the American Foundation for Suicide Prevention’s Out of the Darkness Berkshire County Walk to be held at Monument Mountain Regional High School.

“If nobody talks about suicide, it is going to keep being this taboo subject,” said Zantay in anticipation of Saturday’s walk. “Talking about it is one way to help others,” she added. Before his death, David talked openly about suicide: “I might not make it to 21, but I want to live,” he told his mother. “You hear what you want to hear…” she recalled, noting that David died a scant eight months before his 21st birthday. “The range of emotions around suicide survivors is a roller coaster,” said Zantay, whose own story carries with it a tremendous amount of guilt, some relief and the gamut that lies in between. “He was suffering,” she said of her son — who identified as an athlete, a hockey player — and ultimately succumbed to a brain injury that went undiagnosed.

Across Massachusetts, suicide rates are low when compared to the rest of the country; in fact, the Commonwealth is one of three lowest in the nation. That’s the good news. The not-so-great news is that Berkshire County ranks highest for suicide rates in the state. Between 2007 and 2016, rates rose dramatically for individuals between the ages of 15 and 19: There was a 50 percent increase for females and a 31 percent increase for males. “The female number has broken a national record high, which is really scary,” said Marney Schorr, founder of Arts in Recovery for Youth (AIRY) an arts- and skills-based suicide prevention program for youth ages 13–24 designed by Schorr, an art therapist and attempt survivor.

In Schorr’s experience, theories abound that go hand in hand with the way social media use among this demographic has risen in the same time period. Connecting things like isolation, cyberbullying and internet addiction to this rise in national suicide rates is just one way to try to explain what is happening. Add to that substance abuse, addiction to opioid pain medication, and another gray area appears. “Our highest population of [at-risk] youth is the LGBTQ+ community,” said Schorr. “Their statistics are higher [due to] a lot of stigma to battle, feeling misunderstood, social pressure, [and] confusion that comes along with navigating all of that.”

Schorr is happy to report that the landscape surrounding suicide awareness is changing. Workshops and panels for attempt survivors, as well as national and state recognition, mean more resources are available for those looking to break their silence — and permeate the darkness — surrounding the subject of suicide. Online, the Substance Abuse Mental Health Services Administration has ample literature for attempt survivors: stories of hope, resources and how to approach a topic many find unapproachable.

“The stigma piece is just — we don’t know how to talk about [suicide],” said Schorr. “We know how to read about it, but lots of media is uninformed.” Case in point? The language used to talk about suicide is changing. The term “commit suicide” is no longer used. “We want to honor those who die by suicide, and memorialize them,” Schorr explained, “without idolizing the method by which they died. We want to prevent contagion but honor these individuals as people. They should not be honored any less.”

AIRY focuses on social and emotional learning and creative youth development through the expressive arts, peer support, dialectical behavior therapy and community-building. Its hybrid model is innovative and informed by suicidology and evidence-based practices. Beginning in October, groups will meet throughout Berkshire County, including the newest location at the Bushnell-Sage Library in Sheffield, where the 16-week program includes resources for families about suicide prevention, safe talk and safety planning, and strategies to prevent self-harm. The overarching mission is to collaborate with parents, professionals, artists and youth to stop the public health crisis of youth suicide. There is no cost to attend this program as funding is provided by Berkshire Coalition for Suicide Prevention, the Department of Public Health, Northern Berkshire United Way and the Cultural Council of Northern Berkshires.

In 2018 the AIRY program was recognized by the Massachusetts Statehouse for its excellence in leadership of suicide prevention. Since its inception in June 2017, the program has tripled in size and has shown improvement for 100 percent of youth served, with a record of no suicide attempts. “We are still trying to catch up with the demand of youth coming forward,” said Schorr, noting that, while hundreds of kids across the county are showing up at the emergency room suicidal, AIRY was only able to serve 38 individuals last year. Its goal for the coming year is to serve 100. Schorr reports a retention rate of 80 percent, citing “[young people] want to stay connected to the program.” Schorr is optimistic; program participants are asked to rate their feelings of suicidality, and the data collected to date is promising: “Since our inception, our average rate is a 76 percent reduction in suicidality in people who completed the program,” said Schorr. And the numbers are higher the longer they stay. “We’ve devised the program with a transitional model, staying connected with the [young people] who have done the program — building a community, a family,” she said. Members who complete the 16-week program are eligible to transition into step-up art therapy groups, internships, volunteer work and peer-leader roles in the community.

Schorr brings a wealth of knowledge to the proverbial table. She is able to explain that a majority of those who are dying by suicide do not have diagnosed mental health conditions. “People are dying by suicide because life is hard,” she said openly, noting that trauma is not always that which is happening behind closed doors, but rather out in the community. It is what Schorr calls a much bigger problem, and one not simply associated with mental illness. “From my research, there are interpersonal factors that drive people to suicide, [namely] lacking a sense of belonging, [one] that goes hand in hand with isolation and lacking human connection, and in particular with youth feeling like a burden,” she said, on families and on society. Which brings us to another stigma surrounding suicide: that it is selfish. Not so, said Schorr: “In fact, the person who is suicidal is very much thinking of others  —they often feel others would be better off without them,” which points to the power of having difficult conversations as an important part of destigmatizing the issue.

A Voice at the Table talks are cropping up in various communities; this format pairs loss survivors (those who have lost someone to suicide) with attempt survivors (those who have attempted suicide) in the hopes that the two populations, who share a common bond, might make strides toward getting their respective questions answered. In many ways, this is a simple and small-yet-profound first step in the miles-long journey of bringing the topic of suicide out of the darkness and into the light.

Zantay’s journey has taught her many things, not the least of which is that she is a loss survivor. This past summer she spent 21 days traversing El Camino de Santiago in Spain; she began in Burgos and covered a whopping 315 miles. “I did not go with any intention, but it was a lot about forgiveness,” she said of her trek, “and forgiving David.” She went on: “Even though he talked about [taking his own life] all the time and he made attempts, I couldn’t get my mind around the fact that he wouldn’t be around one day….” she said, trailing off. “That’s why it is so important to talk about it.” Which, come Saturday, is why she will continue to walk.

To learn more about AIRY or to register for upcoming programs, contact program director Marney Schorr at airyberkshires@gmail.com.