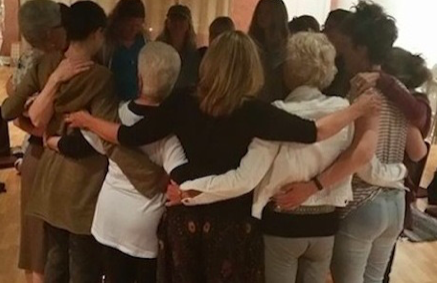 Great Barrington — Since ancient times, humans have gathered in circles: villagers have huddled around fires to sing songs and tell stories; King Arthur put his knights around a Round Table; and the talking circle is a traditional approach to problem solving in Native American cultures. The symbol of the circle must not be overlooked: it is a continuous shape, with no beginning and no end, and no single place of prominence within it. The structure encourages free and honest exchange of ideas — a seemingly sacred space marginalized groups have historically striven to find. In Great Barrington, nearly 200 women have sat in circle over the past five years — part of Walking Our Talk — a culture of trust, connection and empowerment begun informally over a decade ago. This week, four traditional circles — for new participants and returning sisters — will begin in Great Barrington and Pittsfield as part of a long anticipated expansion outside of South County.

“We have dozens of testimonial that say women’s lives have been transformed by sitting in circle,” says Mary Campbell who began the informal gatherings more than a decade ago from her home in Great Barrington. “I wanted to bring my own purpose to the world — something to help myself and other women,” recalls Campbell as to the genesis of WOT. In the summer of 2006, Campbell initiated the meeting of nine women, every other week for a semester; the format was an informal way to follow one another’s progress and “reclaim our voices,” Campbell recalls. That first semester turned into four years. And the impact sitting in circle had on these women was palpable. Campbell recalls the “powerful and very loving and supportive group,” who, after their time together, progressed individually in very tangible ways: one woman released a CD of music, and another got back into painting; one made a significant life move from Boston to the Berkshires and another went to India on a trek. In short, each woman moved her life forward in meaningful ways, and the circle evolved.

In the ensuing years, the addition of leadership has been necessary a means of holding structure. In 2012 the WOT circle moved out of the private arena and into the public eye when Maia Conty — who had worked with Campbell early on as a coach — partnered with Campbell to begin leading circles at Sruti Berkshire Yoga Center in Great Barrington. Arti Ross-Kelso sat in that very first circle in 2012; since that time, she has gone on to become a group facilitator. “The simplicity of the structure is genius — it really works!” she said in a recent phone interview. “When I moved to Kripalu and it was an ashram, what we all had in common was this desire to see one another as our best selves, to see both the divinity and humanity in one another. But that was an insular community,” Ross-Kelso explains. “With WOT circles, there is this sense of living in the ashram: practicing with one another, seeing one another at our best — and that is one of the practices of the circle — a place to really look at ourselves without judgment and criticism.” Perhaps even more poignant is the circle as a place to unlearn these practices of comparison and competition that often get in the way of women learning from and being inspired by one another.

It has been the moving out of a private home and into the community that has allowed WOT circles to gain both momentum and recognition for their role in women’s lives right here in the Berkshires. For Ross-Kelso, the commencing of this fall’s circles is particularly poignant: she will be facilitating a circle at the Unitarian Universalist Church in Pittsfield, a locale she has been pushing to permeate for some time. “I’m feeling really excited,” she says, about the “great turnout in Pittsfield for the intro circle, because it’s been my dream to bring [WOT] to Pittsfield, as a means of bringing more diversity into the circle.” And this importance of sitting in circle is paramount. Today, where many people are deeply spiritual but not religious, sitting in circle becomes sacred for those who don’t necessarily have a community in which to practice. Or, as Ross-Kelso says, for those “not necessarily plugged into a larger community…[sitting in circle] meets that need in a way that seems to be really working.”

Each time women gather in circle, the world heals a little more. This basic premise, in addition to dozens of testimonials, has fueled Campbell’s work in celebrating the transformative power of sitting in circle. And for anyone who is interested but who fears taking the first step, she offers this advice: “As soon as you sit in circle, even for two weeks, much of that [uneasiness] melts away. You begin to feel your connection with other women and the unity that comes from shared struggles and a shared perspective — one that celebrates how you are similar to other women rather than how you are different — is empowering.” Of course each participant brings her own beauty and uniqueness to the circle, all of which is recognized, but it is the shared experience that becomes front and center.

In this vein, each participant works on a project over the course of the 8-weeks. For Sabrina Jaffe of Great Barrington, this process has been transformational. Jaffe sat in circle first as a participant and then as a facilitator. As to her experience, she shares: “We are so fortunate to have Women’s Circles in our community! At these intimate gatherings, we practice new agreements in the way we speak, listen and relate to one another. Women come into circle for all different reasons; to meet and network with other women, to experience being positively supported in taking on a project, or to tune into our own inner values and purpose. Whatever the reason, we sit together and welcome one another just as we are.” This fall, as she takes a hiatus from both participating and facilitating, it is for good reason: “I am currently completing a project I began in circle about a year ago. Being positively supported by the women in my community really gave me the courage to pursue this new business venture. I can’t imagine what the world would be like if all women sat in circle.”

Challenges do abound with expansion, and those challenges must not be overlooked. Each 8-week circle comes with a $250 tuition fee that is not within the grasp of all women in the Berkshires. WOT recently partnered with a fiscal sponsor, Multicultural BRIDGE, and is now able to accept tax-deductible donations as a 501c3 nonprofit. It is the organization’s hope that all women, regardless of their circumstances, might have the opportunity to participate in these circles, both for the purpose-driven support to land projects they’ve been dreaming of, or to be supported to carry through with a variety of intentional self-care objectives. The buddy system and specific weekly curriculum guides help women to maintain a solid path toward fulfilling their goals — all under the guidance of women who have gone through years of participation and leadership training and who serve as facilitators. For more information about forming circles in Great Barrington and Pittsfield, visit www.walkingourtalk.org or call 413-203-9448 or 413-329-7477.