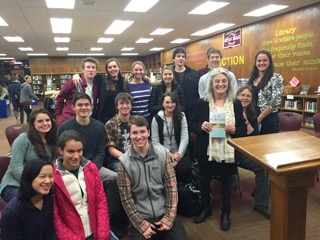 Great Barrington — Polio. Just the mention of it would spark fear in the hearts of teenagers and parents alike. Its eradication, due to the formulation of a vaccine by Dr. Jonas Salk in 1953, is well documented within history books and is embedded in the collective minds of a generation. But while polio carried such a heavy weight for one generation, its effect has been completely lost to a newer, more connected generation that receives updates and spreads data faster than a disease itself.

Local author and poet, Karen Chase, hopes to share her experiences as a writer and polio survivor. She is the author of Polio Boulevard, a memoir that recounts her childhood as she experienced polio. (For an article about Polio Boulevard, click here.)

The Advanced Placement Language and Composition classes at Monument Mountain Regional High School read Ms. Chase’s book, and invited her to come to the high school’s library and speak not only about her experiences with polio, but also about the writing process as well.

“Although the book centers around my experience, having polio, it’s really a coming of age story from an unusual perspective,” said Ms. Chase.

From the moment she took the podium, the class was silent and focused. Hearing the author recite the written words the way they were supposed to be read is a sobering experience that sheds light on nuanced techniques employed.

“Ask me anything,” she said. “Even the things you think you shouldn’t ask, ask. I have nothing prepared, so fire away.”

From there on a group of aspiring writers did fire away with questions ranging from personal questions to stylistic ones to writing itself. While one student would ask about specific plot points, another might ask about structure or diction or memory itself. It was a revealing conversation for both sides.

“How did you recover from such a debilitating illness?” one student asked.

“If you could go back and stop yourself from getting polio, would you?” another student asked.

Resoundingly she answered with, “I think absolutely I would! I wouldn’t want anyone to have to experience polio as I did.”

One student asked Ms.Chase, “How did you decide on writing a memoir?”

She answered, “I had no plan to write a memoir, but had many notes which at some point propelled me to tell my own story.”

Another asked, “What advice can you give to young writers?” Chase answered: “Be daring, be risky, go way out on a limb. You have to be able to tolerate writing a lot of bad stuff to come up with something new.”

After her presentation to the class, she took time to reflect upon the kind of questions students were asking about writing itself. “It’s really illuminating and fun,” she said. “I particularly enjoy questions about the style and ‘why did I do this and what’s behind this’ — that was particularly rewarding. It’s critical for any writer.”

But she had questions for the students, too. She addressed the class directly: “Was the non-linear style hard for you to follow?”

The conversation was beneficial for both sides — students and writers were able to learn about polio and the process of writing, while Ms.Chase got insight into the effect of the book on young people.

“It’s really rewarding to talk to teenagers,” she said. “I feel that no matter what happens to you, you are who you are, and you don’t have to lose that. I am what I am as Popeye says. I love sharing that point of view with these kids.”