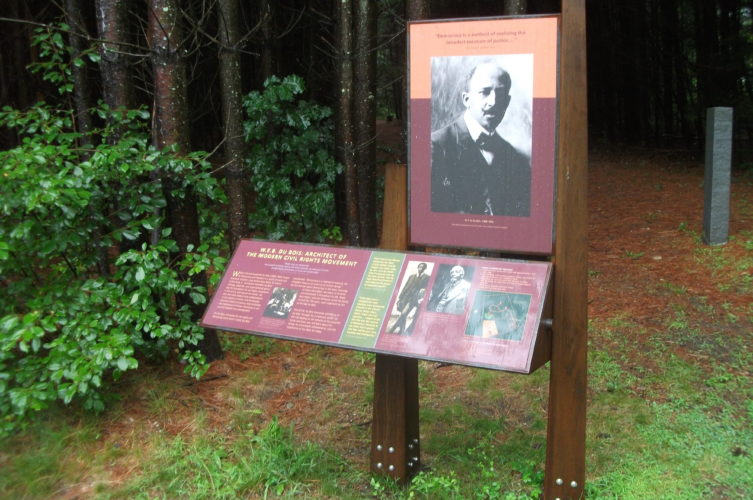 Great Barrington — State Representative and Majority Whip Byron Rushing (D-Boston) will be the keynote speaker at a celebration of the life and legacy of W.E.B. Du Bois on Saturday, July 12 at 4 p.m., at the First Congregational Church in Great Barrington. In the Footsteps of Du Bois is a day-long series of events culminating in a public program featuring Rushing, who will reflect on Du Bois’s significance today. A reception follows.

Prior to becoming a Massachusetts State Representative in 1982, Byron Rushing was co-founder of Boston’s Museum of African American History and was the first executive director. Under his direction, the Museum purchased and began the restoration of the African Meeting House, the oldest extant black church building in the United States.

Rushing also played a key role in the creation of the Boston African American National Historic Site, which is part of the National Park Service.

William Edward Burghardt Du Bois, born and raised in Great Barrington, became a brilliant scholar, champion of civil rights, founder of the NAACP, and leader for international peace and social justice. Throughout his life Du Bois maintained his connection to Great Barrington. As a 60th birthday present from his friends he received the deed to his ancestral homesite, a place where he spent his early childhood. In 1969, the homesite and additional acres were dedicated as a memorial park to Du Bois. In 1979, it was designated as a National Historic Landmark.

The University of Massachusetts Amherst is the steward of the Homesite. The UMass Amherst Libraries are home to the W.E.B. Du Bois Papers, openly available online, and the W.E.B. Du Bois Center, a resource dedicated to creating new knowledge and supporting scholarship emanating from the life and teachings of W.E.B. Du Bois.

A new interpretive trail has been created at the Homesite. It takes visitors to the remains of the Du Bois ancestral home and along the way introduces visitors to Du Bois’ family, his accomplishments, and the story of the homesite itself as revealed through UMass Amherst’s archaeological investigations. The trail was funded by the 1772 Foundation and UMass Amherst. The Homesite is also designated as a point of interest on the Upper Housatonic Valley African American Heritage Trail.

In the Footsteps of Du Bois appropriately begins with a walking tour in downtown Great Barrington at 10 a.m. The public is invited to join local historian Bernard A. Drew in viewing buildings that stood during Du Bois’s day and learning of his routines and friends. The tour will begin at the Du Bois Birth site (National Historic Landmark sign) at the end of Church Street in downtown Great Barrington. Parking is available near the River Walk.

At noon, the public is invited to attend a headstone dedication to commemorate the final resting place of W.E.B. Du Bois’s daughter, Yolande Du Bois Williams, at the Mahaiwe Cemetery on Main Street. The event will include remarks by the great-grandson of Du Bois, Arthur McFarlane II.

In the Footsteps of Du Bois is co-sponsored by the W.E.B. Du Bois National Historic Site, the Upper Housatonic Valley African American Heritage Trail, and the UMass Amherst Libraries.

The longer-term vision is to create an international destination with multiple venues in Great Barrington, including the W.E.B. Du Bois Center for Democracy and Social Justice that will engage the public in Du Bois’s life, global significance and relevance to important issues of the day.