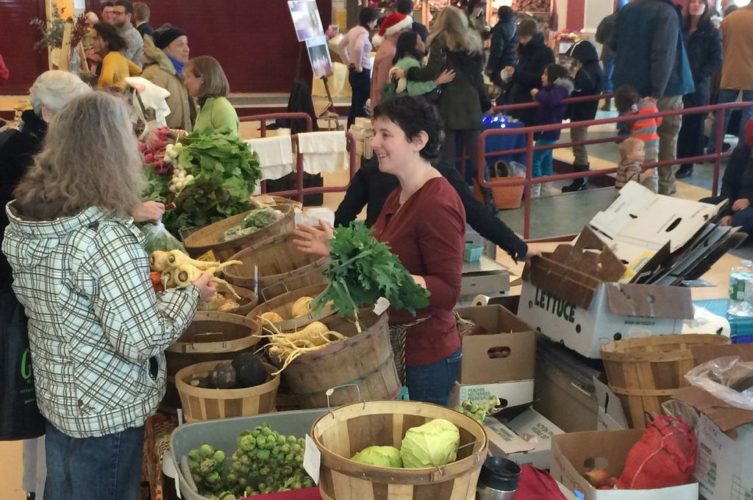 Saratoga, N.Y. — In an era of massive industrial agriculture, where 3 percent of America’s farms are so big that they produce 75 percent of the food, you wouldn’t think that many folks would want to make a career in agriculture. Yet hundreds of such people gathered in Saratoga last month for the “It Takes A Region” conference of NESAWG, a clunky acronym for a vibrant organization — the Northeast Sustainable Agriculture Working Group. Encompassing more than 500 local organizations, including our own Berkshire Grown, NESAWG is dedicated to uniting farmers, food handlers like packers and restaurants, policy makers, scientists and the eating public to create a sustainable, affordable, healthful food system for our region.

In workshops that covered everything from fracking to fishing, solar power to drip irrigation, climate change to land grabbing, the participants — many of whom were under 40 — plotted the future of food. One centerpiece of NESAWG’s plan is the “50 by 60” program, which plans that by 2060, 50 percent of the food produced in the northeast should be consumed in the northeast. Tom Kelly of the University of New Hampshire envisions a tripling of New England acres under cultivation from 2 to 6 million. 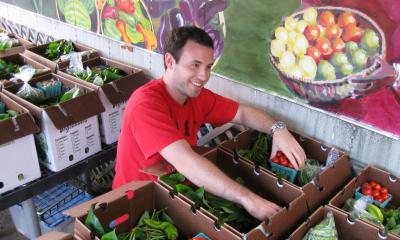 Where would the markets come from for this increase? Brandy H.M. Brooks of the Boston Collaborative for Food and Fitness pointed out that the region’s universities spend $5 billion on food every year. “If they can be convinced to purchase sustainably grown produce, that’s a huge market for the small farmer.” Stacia Clinton of Healthy Food in Health Care said that hospitals, another multi-billion dollar market, are just beginning to recognize the connection between their commitment to health and the purchase of food raised without drugs or chemicals. The enthusiastic young Massachusetts fisherman Brett Tolley, community organizer for the Northwest Atlantic Marine Alliance, noted that 92 percent of the fish we eat is imported from overseas. He pushed for CSFs — local community supported fishers on the model of CSAs, community supported agriculture — to help fishing families in our region stay afloat and bring in a fresh, local catch.

The U.S. Department of Agriculture reports an increase in the number of farms between the most recent census and the one before it — from 2.1 to 2.2 million. But at the same time, the number of farmers has greatly decreased. That’s mostly because the agricultural population is aging out of the business — more than 50 percent of farmers are over 55 — and because huge corporations owning hundreds of thousands of acres now dominate. They can afford costly new technology like computer-run tractors and satellite-directed irrigation systems that require far fewer people. For the young would-be farmers at the NESAWG conference, finding a way to make a living mostly depends on clever niche marketing, access to capital, particularly to purchase land, and the support of health-conscious eaters capable of paying the higher price for artisan food. 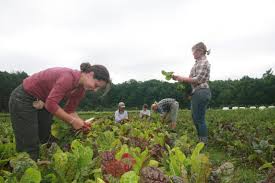 Stephanie Box of Pennsylvania, 25 years old, is determined to be an organic farmer. Her family farmed for five generations until her father broke the chain. Stephanie is reconnecting it. She did her undergrad work at NYU, worked at the Brooklyn coop and scoped out the Union Square farmers market and the kinds of wised-up shoppers who might pay the extra for fresh produce trucked in from across the bridges. Now she’s getting her Masters in food studies at Chatham University. She has 35 acres from the family to start with, including a house, a barn and a working well and a grove of sugar maples, with additional acreage available nearby. “I’m thinking about diversified vegetables, goats for cheese making, and maybe a small herd of dairy cows, too. It will be a holistic system where you plant vegetables and feed your stubble and imperfect crops to the livestock who pay you back with manure so you can grow more vegetables, and on and on.”

The most daunting problem facing young farmers is the scarcity and high price of good agricultural land. An acre can start at $2,500-$3,000. Stephanie has heard of the best farmland selling for as high as $20,000 an acre. And equipment costs are staggering. One farmer figured it would cost at least half a million to acquire enough equipment to farm 1,000 acres. “It scares me, the idea of going into farming, because I know the system is convoluted and confusing and stacked against me,” Stephanie said. “And I know I don’t think about that enough. When you work on a farm, you’re up at 6 and in bed by 8:30 and it’s easy to lose touch with the harsh realities out there, most of all the huge disconnect between big industrial agriculture and the kind of farming somebody like me can do.”

She continued: “But we have distinct advantages in New England. We have good soil, lots of free water. I’m lucky because our family has been here for generations and I have connections in the area. I don’t want to squander this opportunity. I really feel like if I plan well and get the technology and the marketing right, I can do this.”.

The synergy among groups — consumer organizations with farm labor unions with financial institutions offering loans for farmland acquisition with seed bankers with political activists with universities and hundreds of other cross-fertilizations — is the basis for the NESAWG food system regionalization effort. The central document of the effort is “New England Food Policy: Building a Sustainable Food System,” written by NESAWG’s long-time leader Kathy Ruhf of Massachusetts (now Executive Director of “Land for Good” and a frequent presenter at local agriculture colloquia) as well as the Conservation Law Foundation and the American Farmland Trust. This impressive document is available from www.newenglandfoodpolicy.org or from www.nesawg.org.