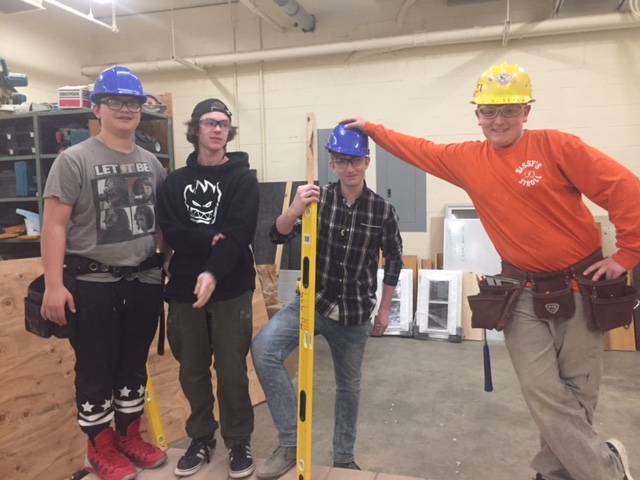 Great Barrington — According to an alarming video shown during education expert Bill Daggett’s talk at the Mahaiwe Performing Arts Center on April 24th, houses will one day be built by robots. But until “one day” arrives — one, 10, 30 or 50 years down the road — we’re still building an awful lot of homes here the old-fashioned way, and the average carpenter is not getting any younger. In fact, for every skilled tradesman entering the U.S. workforce, there are five retiring. In Berkshire County, construction accounts for 7 percent of all jobs. (US Census, American Community Survey, 2012-2016)

There are many reasons why young people aren’t going into carpentry in greater numbers, among them the push in public education toward college for all, and an enduring stigma associated with what used to be called vocational, and is now called “career and technical,” education. But locally there are at least two programs beginning, perhaps, to change that.

John Hartcorn started out his career as a rock and roller, then became a furniture maker, and is now in his third year as the part-time woodworking teacher at Monument Mountain Regional High School. He likes the art of the work.

“Wood tech” is the term he uses for his three elective classes, which, this year, total 33 students — about 12 per class — from all four grades. Between his first and second years, his roster went from 21 to 53 students (“That,” he said, “was tough to manage.”). Hartcorn sees students for one period each class, though he says the custodians who attended Monument recall having double, or even triple, periods in the wood shop. He has at least one serious junior who’s already lined up a summer job in the building trades and wants to make it his life work.

The kids all start off with the same assignment: to use rough lumber to make a little box. They learn how to use the machines to cut their pieces to size, join them, plane them, make the joints, make floating panels. “There’s an awful lot in that one little box,” Hartcorn says. After a while, they understand the process and, from there, he teaches them drafting so they can begin to design their own projects. What sort of projects? “This year we got a lot of desks.” There’s also one fancy vanity, a dog house and baseball bats turned on the lathe. Wooden pens, also turned on the lathe, have become a very popular product.

In fact, as we talked, we were interrupted by a particularly devoted student, who has trouble staying still. He was hoping to make some pens, which he sells for $20 (He’s sold quite a few.). “He saw this one thing, turning on a lathe, and that caught his interest. He found a focus. I’m not here for so much a vocational thing as I am helping kids find a focus. That’s as important as anything.”

Two of Hartcorn’s most successful graduates may never work with wood in their careers, but they did beautiful work in his classes and he’s certain they learned a host of skills applicable to the work world. Most importantly: “They learned a lot about themselves….It’s all about problem-solving. I make sure they understand that failure is a part of this program.” Among his future goals for coming years is the revival of a dedicated drafting and design class, and to teach an Autocad component.

At Lee High School, woodworking and carpentry teacher Corey Heath graduated himself, in 1990, from the program he’s now been hired to run. His teacher back then was John Reilley. In that program Heath built two houses, each about 1,500 square feet, both still standing, one on Prospect Street and one on Mountain View Terrace. After graduation, he went right to work for Joe Bartini and worked in the field until taking up the teaching job.

Heath will soon be winding up the first year of the carpentry program’s rejuvenation, after an eight-year hiatus, supported by a renewable Perkins grant.

Reilley’s original program was eliminated due to budget cuts and the closing of the Southern Berkshire Educational Collaborative, according to Lee High’s principal, Gregg Brighenti. He says, of the community impetus to get it back up and running, “The lack of vocational courses available to our students since the end of the old house-carpentry program was definitely recognized as an issue.” In addition to the grant, local businesses have come forward to donate materials, for which Brighenti is grateful.

Heath has started out with four freshmen, and his goal is to build the program into all four grades and to provide graduating students with a state-recognized certificate that will put them ahead in the industry. This year kids are working indoors, but he hopes to get them outside in junior and senior years, when they could be working on much more advanced projects like home additions.

Woodworking class is a requirement for for eighth-graders and, in ninth grade, becomes an elective. The focus in those classes is similar to that of Monument’s, with students, once they learn the basics, able to pursue their own projects like Adirondack chairs, attractive end tables and coffee tables, bird houses or boxes.

I observed the first period of Heath’s daily two-period carpentry, with three freshmen boys and one sophomore boy, who immediately put on work goggles and hard hats and went to the project at hand with minimal instruction, cutting out a hole from the wall of the garden shed they’ve been working on (The shed has already been purchased by a retired teacher.).

The four boys took turns (carefully) with the screw and nail guns, the level and the jigsaw. They offered each other reminders and guidance. After this step, they will be able to install the windows, interior walls and flooring, but no one under 18 is allowed to work on roofs, which will be have to be assembled separately and attached by adults.

Lee, like Monument, is a comprehensive high school, meaning academics and a few career and tech classes are all offered under one roof, though academics are emphasized. This would contrast with, say, the Tri-County Regional Vocational Technical High School in Franklin, which offers 12 different non-academic career paths like cosmetology, construction, transportation and manufacturing.

Chase Thomas, the sophomore, said, “This class is really fun.” He intends to join the Army out of high school and sees carpentry as work he’ll turn to in retirement. And as Heath says, “It’s a skill they’ll put to use for the rest of their lives.”

In September, the Lee students took a 10-hour online Occupational Safety and Health Administration course, which they all passed. The worst-case scenario photos of fingers and skulls nail-gunned were, Heath says, effective in creating a serious atmosphere in the shop. Students then focus on book work, using a study guide for each tool, and take quizzes on each tool. The course is aligned with state standards, just like any core academic class.

To date, students have built, among other things, picnic tables for the school’s outdoor eating area and benches for the softball fields, as well as several of the sheds.

Anthony Delsoldato is an enthusiastic freshman from Otis who was wearing Carhartts, a yellow work hat with “BIG FELLA” written in Sharpie on the front and a new work belt.

“I love it here,” he said, looking proudly at the shed project. “This is the only class I look forward too.” He sees carpentry as the next step up from Mr. Heath’s woodworking class he took last year in eighth grade. “I really enjoyed wood shop, and I find this really fun and interesting.” He plans to do the four-year program, though he’s clear that he wants to be a fulltime firefighter when he graduates. “But I’d consider this as a side job.” His classmate Patrick Parmalee, on the other hand, is here because he wants to follow his dad into the building trades.

Making rafters and stairs would be the next logical challenges for this group, in the fall. Heath has already more than doubled his student numbers for the 2018–19 school year; five additional students, including two girls, have signed on.

The bell rang in the middle of siding the second wall and there were several groans. No one jumped up to leave. But fortunately they would, I was told, get to come back and pick up where they’d left off after lunch.

Rep. William “Smitty” Pignatelli, D-Lenox, is the brother of an electrician who earns more than he does. He wishes we would, as a society, “recognize there are kids who don’t need, can’t afford, and/or don’t want college.” He also wishes we could do away with the “dirty jobs” stigma once and for all. “The car mechanic of today is switching out computer parts.” He adds that, in all our community hand-wringing about the difficulty of attracting young families to move here, we’re ignoring the young people who have been here all along.

Smitty recently visited Mount Everett Regional High School in Sheffield with folks from Covestro (formerly Sheffield Plastics), who explained the jobs they have available for kids right out of high school or with an associate degree. After their presentation, Pignatelli asked the senior class, “Who wants to come back here to live in the Berkshires after college?”

No one raised a hand.