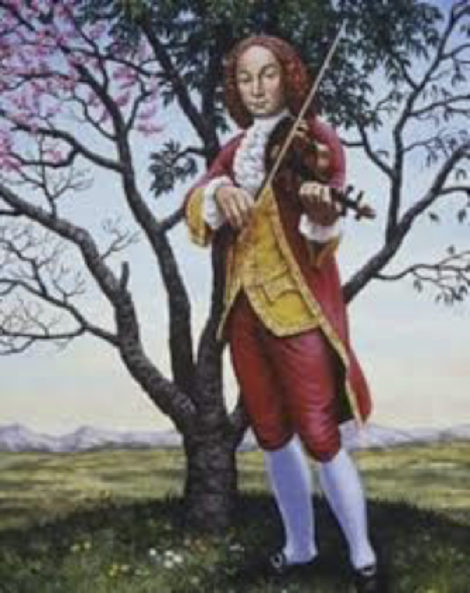 An undocumented portrait of Antonio Vivaldi in his beloved Mantua nature. Note the red hair.

Lenox — Preview of Coming Attractions! Apollo’s Fire, the Cleveland Baroque Orchestra, is coming back to Tanglewood. Two summers ago their debut performance of An Evening at Bach’s Coffee House wowed the sold-out Ozawa Hall audience bringing them to their feet hooting and howling with bravos. It was a real musical caffein high.

Not to be outdone, on July 5th at Seiji Ozawa Hall conductor Jeannette Sorrell and her band return to Tanglewood to Rediscovering Vivaldi’s Four Seasons. What’s to rediscover, you might ask? Isn’t that one of the most popular pieces in the Baroque repertory? To answer the question: inspired by the Italian countryside around Mantua, Vivaldi wrote a poem for each season and then proceeded to turn them into four bravura violin concertos. Birds sing in the gentle spring breeze, storms gather, countryfolk celebrate the harvest with wine festivals, and teeth chatter in the icy winter.

Take a listen to the first movement of Autumn played by Apollo’s Fire with Olivier Brault as soloist (see video below). The peasant celebrates the pleasure of the happy harvest with dances and songs; and inflamed by the liquor of Bacchus, many end their rejoicing with sleep.

Also included in the program is Vivaldi’s Concerto for two cellos in G minor. You will understand why Apollo’s Fire’s motto is “Passion PERIOD!” when you hear this piece.

Most of Vivaldi’s concerti —including the Four Seasons — were written for the female musical ensemble of the Ospedale della Pietà, a Venetian orphanage for abandoned children where Vivaldi was the music master for over 30 years. He trained these very youthful girls in music theory, string playing and singing, concertizing with them in Europe to great critical success. Consider them as an early 18th century El Sistema with Vivaldi as Gustavo Dudamel. Women Libbers take note: the boys were trained in manual labor and had to leave the orphanage at age 15 whereas the talented girls stayed on and became members of the Ospedale‘s reknowned orchestra and choir.

Apollo’s Fire has toured Europe to great acclaim, especially in England where they sold out the BBC Proms in London and performed at Benjamin Britten’s Aldeburgh Festival. According to Gramophone Magazine, “Led by brilliant harpsichordist, Jeannette Sorrell, the ensemble exudes stylish energy — a blend of scholarship and visceral intensity.” They have released 25 commercial CDs, of which seven have been bestsellers on the Billboard classical chart.

Let Jeannette tell you some more about their music.

Enjoy the movie — I mean the concert.