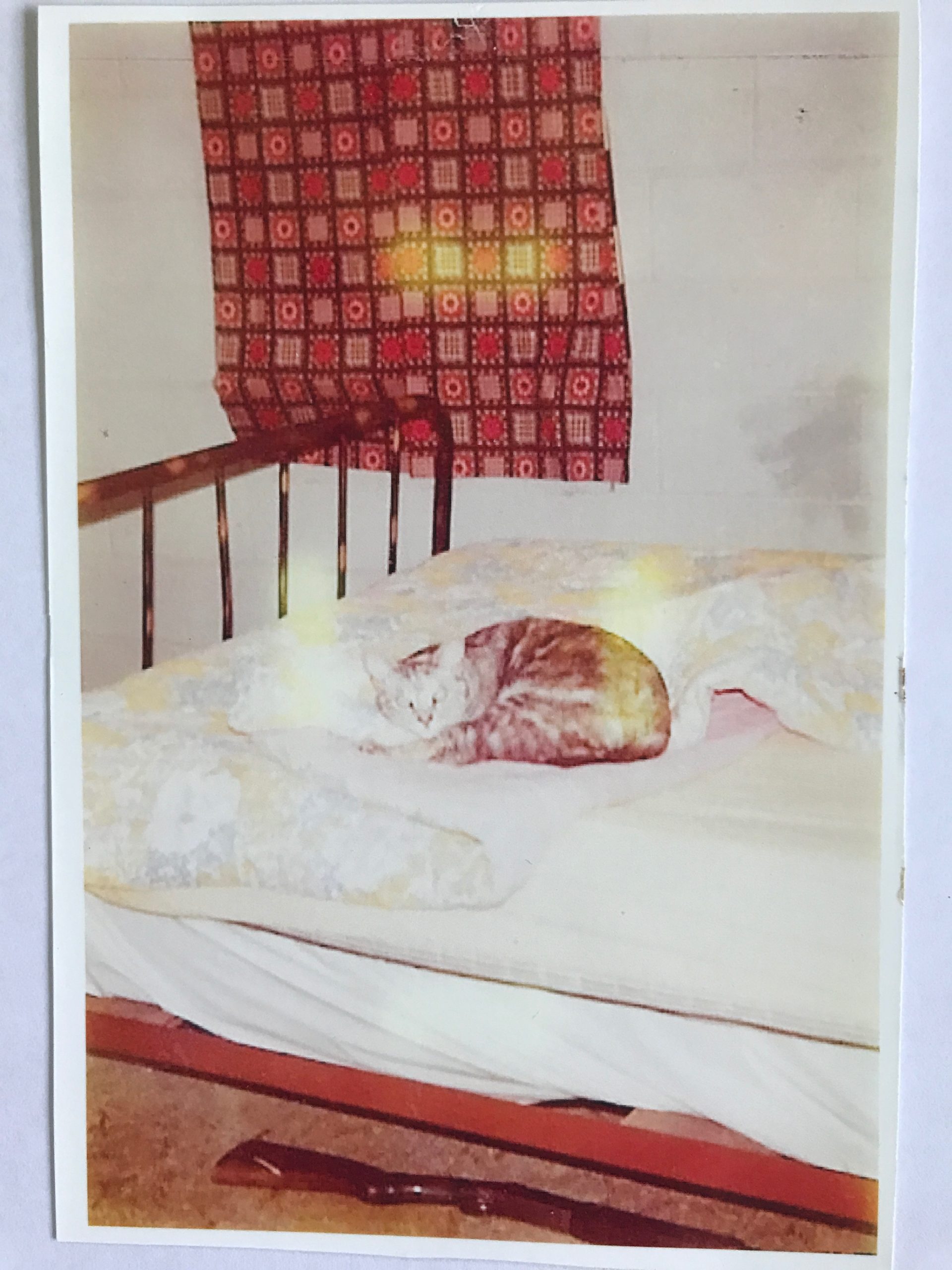 See the rifle under my bed. A necessity for a VISTA volunteer in the South in the '70s.

It is with deep sadness that I recall an episode in my life that so clearly reflects what is STILL happening in our country today. The ill treatment and injustices that have been forced on the less “privileged” continues to eat its way into our lives – no matter the color of our skin, our ethnicity or the poor conditions in which many spend their lives. Allow me to take you back to nearly 50 years ago.

It’s October 12, 1971. I’m 31 years old, pretty much a New York City girl, living in rural Beulaville, North Carolina (population 400). I’m standing in the doorway of my bedroom in a rented cottage with a shotgun in my hand. At the front door, just across the room from where I stand, is Buck Raymond. Buck has just broken into my house (it’s 11 p.m.). He is disheveled and drunk and raring to chase me out of town. A skinny guy about 5’10”, he and his brother Dirk have been after me ever since I moved to the community as a VISTA volunteer. My job was to help poor citizens (black, white, Indian) in three different rural communities convince the county establishment to provide food stamps, not to interfere with their rights to vote, and to assist them in taking on some local form of economic development and independence (selling their farm crops and magnificent hand sewn quilts in the marketplace) without the Ku Klux Klan on their tails.

These two crazy guys lived just down my dirt road and were my only neighbors and they knew I was not the Head Start teacher we were required to use as a cover for our community work. They had already verbally assaulted me, called me nigger lover, and slung rocks at my dog, Charity, (named after a little community where I was working). The ultimate was when they burned a cross on my lawn just to make sure I knew they were Klansmen and really meant business! It was clear I would have to call the local sheriff, Alfie Dunn, who, thankfully, was not a redneck. Alfie, a very big guy with a commanding presence, knew me fairly well— my back yard abutted his tobacco field and he used my water supply to keep the crop growing. He also tended to his soybean crop, which was across the road from my house. Alfie decided I needed something to protect myself and one Saturday morning he brought along a shotgun, lined up some empty oil cans on my back fence and taught me how to shoot!

Three days later, when Buck broke into the house, I was equipped. I heard him come crashing through the front door and, moving as if on autopilot, I reached under my bed, grabbed the gun and shot him in the leg. I nearly collapsed with fear until I saw that I hadn’t killed him — my intention was to stop him from attacking me and show him who was in charge. I was relieved to see him hopping up and down in pain and hightailing it to his truck where his brother waited to take him home. I was glad I hadn’t killed him.

I called Alfie who was out on patrol and, as there was no such thing as police radio out there, his wife turned on the red light on top of their house to get Alfie’s attention. I reported the incident and then collapsed on my bed, holding onto my cats and dog for dear life until Alfie came. He quickly drove down the road, picked up this injured cowboy and dragged him off to the hospital to fix the hole in his leg. Then he arrested him. Buck was freed two days later and never bothered me again.

What exactly was it that prompted me to give up a career selling advertising space in American Baby Magazine for this!! It was certainly a far cry from my life in New York City. Was it my recognition that the political club (the Community Free Democrats) I had joined on the Upper West Side of Manhattan — and the liberal and humanitarian work they established as their mission — was a lot more important then convincing advertising agencies to buy diaper ads? Jerry Nadler, an important player in national politics these days, was our club chairman and he taught me a lot about activism at a time when I wasn’t feeling fulfilled in my work and needed something that resonated with my soul.

While standing on NYC street corners fighting for abortion rights and campaigning for candidates who could stop the war in Vietnam, I decided to give up the ad game, and do what? I had to make a living. One of my brothers said, “Join VISTA.” I knew that VISTA was pretty much considered a time “filler” for kids just out of college with no particular career in mind and I doubted they’d accept me at age 31. But they did. I was keenly aware that I would be earning $125 per month and had to pay for housing out of that! So what. This was a chance to find the real me, do some good while at it and I thought it would be worth the financial sacrifice.

As the time to leave for Atlanta for VISTA training neared I experienced a remarkable combination of joy, anticipation and anxiety. After all, I was a city girl and now, having chosen a rural North Carolina community-organizing program as my assignment, would it work – would I be good at it? Training for the job took place in public housing in Atlanta. I was living with a young black family, sharing a bed with one of the children and the bed bugs, attending training workshops with material from the greatest of all community organizers, Saul Alinsky, and then being shipped down to Rose Hill, a tiny town in North Carolina where our local VISTA program got under way.

For the next step in our training, VISTA volunteers were separated from each other and assigned to live with families in the communities near (but not in) where they would serve. I was sent to a live with a poor white family (we were not permitted by state law to live in the black communities where most of us would work) and was kept in isolation from the other VISTAs for the purpose of total immersion into the family’s culture. My hosts were a grandmother, a daughter and the daughter’s teenage daughter (the product of a sexual relationship between her mother and her mother’s brother). A rather dysfunctional family, although they accepted me with open arms – they knew our project was meant to help all the poor folks in the county, the whites, the blacks and the Indians.

After this period of isolation we were all given separate assignments – there were about 10 other VISTA volunteers (all in their late teens) in this program and they had to live together in twos and threes. Because of my age (and “life experience as an adult!”) I was allowed to live alone. My house was in the tiny town of Beulaville, about 15 minutes in three different directions from the three communities I was to serve.

And so a radically new and life-changing experience was before me. I adored the people in the communities I served, organizing them into groups that would demand the county provide food stamps (instead of the surplus warehouse stuff), create safe voting places, campaign for a union for the poultry plant workers and feel free to mingle with white people without retribution (a VISTA volunteer had been found dead in a government car the year before I got there for “socializing and inciting blacks”.) As a result of this work I was constantly harassed by the county leadership – our program would cost the county some dollars – the same dollars that the county earned in taxes from the poor people who labored under less than decent conditions. But it was important work and we were going to stay as long as the government-funded VISTA would fund our work. While the program was just a one-year program (unlike the Peace Corp at two years), I re-enrolled after the first year and then stayed on for yet a third year writing grants to fund the program. In the end the program was defunded – to be replaced in later years by Americorp (although not in the same location), an excellent program for people who want to do public service.

My life had changed forever and when I returned to New York in 1973 I began a career in non-profit management and fund-raising. A whole lot more fulfilling than taking ad executives to baseball, hockey and football games just to get an ad. Beulaville, Charity, Rose Hill, Kenansville, all these hamlets taught me what I wanted to do with my life – service to the community – whatever that community might be. Had I been unfortunate enough to have killed Buck, my life would certainly have taken a different turn.

Now, 50 years later, I remain grateful for the lessons in humanity and civility that I learned. The VISTA project gave me the opportunity to engage with a population I had not known so intimately before. I came to understand that all of our hearts have similar rhythms.

We need much, much more of this kind of work today. Call it whatever you wish – but do try to save our civilization.