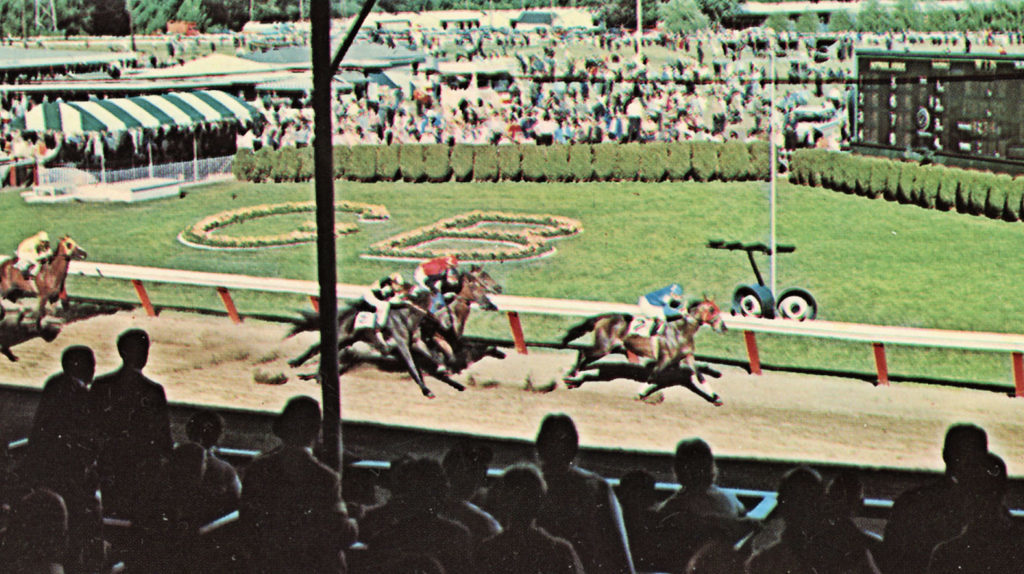 The view from the grandstand during a fairgrounds race in the 1960s. Photo courtesy BerkshireArchive.com

The Great Barrington home rule petition on horse racing, passed nearly unanimously at a special town meeting in December, is now making its way through the state Legislature in Boston. A public hearing will take place before the Joint Committee on Consumer Protection and Professional Licensure, and has been tentatively scheduled for Monday, Jan. 27, in the Gardner Auditorium at the Massachusetts State House in Boston, with the time to be announced. Citizens Concerned About GB Horseracing Inc., the same group that organized the successful home rule campaign, is urging residents from around the region to testify at the hearing, attend to show support, or to submit written testimony in favor of the bill.

The home rule petition was then filed by state Rep. William “Smitty” Pignatelli, D-Lenox, and is now a bill co-sponsored by Pignatelli and state Sen. Adam Hinds, D-Pittsfield, H.4272. It has been referred to the Joint Committee on Consumer Protection and Professional Licensure, the same committee that is evaluating bills S.101 and H.13. Senate Bill 101 provides that horse racing licenses in locations that previously were granted commercial racing licenses would need no further approval from the municipality. In Great Barrington, that would mean neither the selectboard nor the citizens would ever have a vote.

When local residents learned that racing could return to the region without requiring a vote by the Great Barrington voters or even the selectboard, alarmed citizens took action by forming a concerned citizens’ group that turned into a nonprofit: Citizens Concerned About GB Horseracing. After successfully calling for the special town meeting and passing the home rule petition, members of the group have now met with their local representative, Smitty Pignatelli, and with the house chair of the joint committee on Consumer Protection and Professional Licensure, Rep. Tackey Chan, D-Quincy, about the status of H.4272.

“Smitty let us know that the bill is progressing and Chairman Chan confirmed a hearing will be set, probably Jan. 27 in Gardner Auditorium, at a time to be announced,” said Pam Younguist, member of CCAGBHR. “Great Barrington citizens sent a strong message with the great turnout and almost-unanimous vote at the Special Town Meeting, but now we need to demonstrate a unified voice of support via testimony at the hearing so that the bill, H.4272, is recommended by the committee and is ultimately passed by both the senate and the house in the state legislature,” she added.

Great Barrington resident Janel Munoa, who presented the home rule petition at the special town meeting said: “I was so moved by the turnout and overwhelming support of the home rule warrant on Dec. 11. I hope we can continue that momentum with a strong showing at the hearing. Unlike the special town meeting, all GB and South county residents can attend or submit written testimony. I know that residents from around the county and region are worried about a return of horse racing to GB. Our voices united can make the difference in democracy here.”

CCAGBHR will be organizing meeting spots in the Berkshires and at the State House to gather before the public hearing.  Anyone who wants to attend the hearing, or would like more information about submitting written testimony, can call or text CCAGBHR at (413) 644-6369, or write to concerninggbhorseracing@yahoo.com.