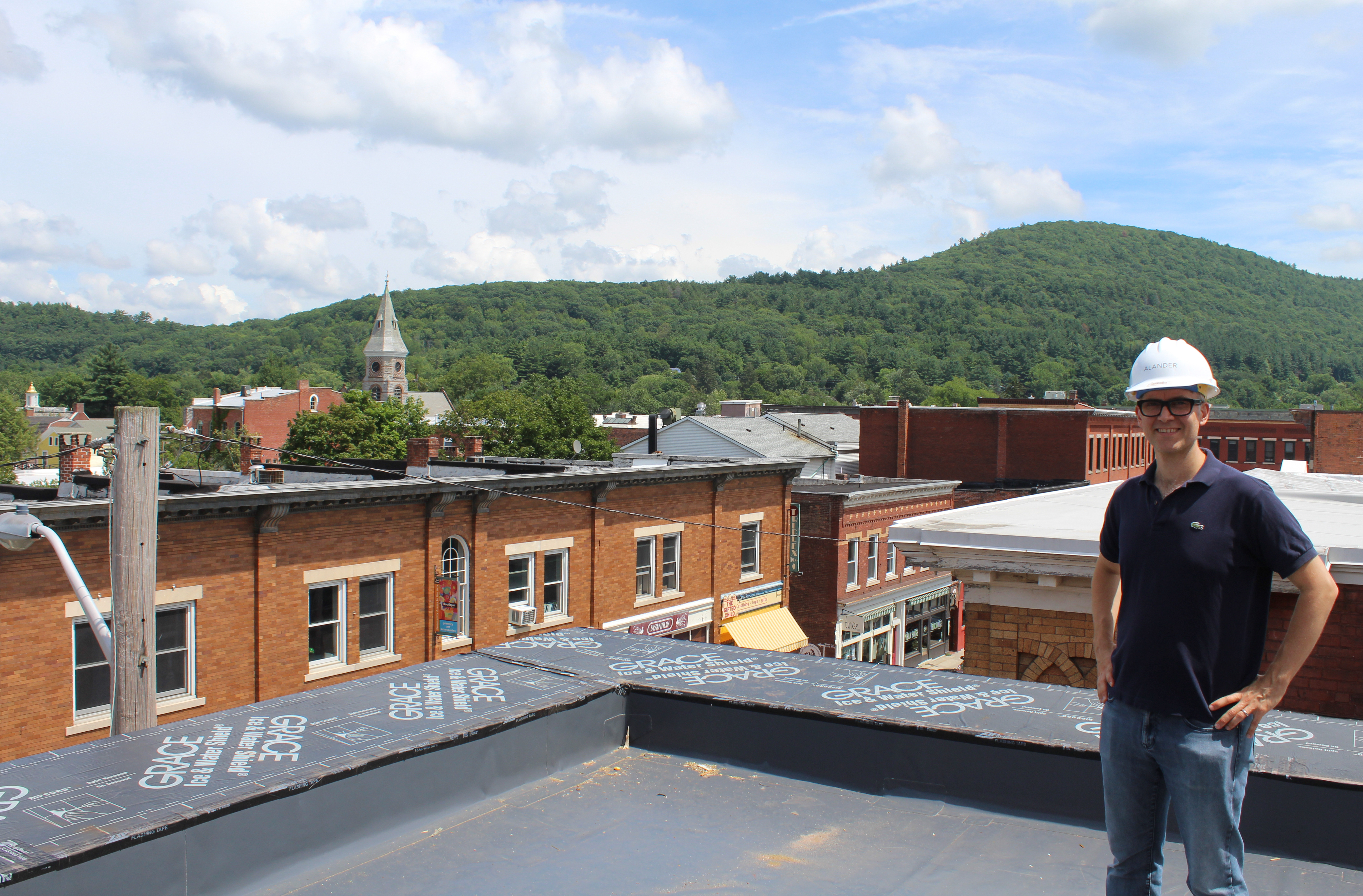 Great Barrington — It won’t be long until Railroad Street hums with even more activity than it does now. The dense urban feel of eclectic Railroad Street already attracts an array of hipsters, diners and tourists.

But by the end of the winter, when 47 Railroad Street opens its doors, you can add the residents of 13 market-rate apartments and at least one more restaurant to the mix.

The space at the top of Railroad Street became available a couple of years ago when the old Mario’s Tuscany Grill closed (before the restaurant was called Mario’s, it was Fiori and before that, Pearl’s, depending on how far back you go).

Eventually Sam Nickerson and Ian Rasch of Framework Properties envisioned a mixed-use development of the property that included 12 market-rate rental apartments and up to five retail spaces.

After making a presentation, the partners were able to snag a special permit from an enthusiastic Select Board last October and off they went with the $5 million project that included demolishing the building behind Mario’s and putting up a three-story structure that will house many of the apartments. Plans expanded slightly when the adjoining Martin’s Restaurant closed after a kitchen fire damaged it  and Framework purchased the space for a little more than half a million dollars. In all, the current space is set to increase from about 11,000 square feet to 18,400 square feet.

The project has the potential to either transform Railroad Street or diversify it, depending on your point of view. The apartments will add to pedestrian traffic and the retail outlets will contribute to the downtown business climate.

“This will be unique in Great Barrington,” Nickerson said as he took a reporter for a tour around the premises. “And there will be round-the-clock life on the street.”

The alleyway that runs between 47 Railroad and the building that houses Crystal Essence will be preserved and opened up and will become more vibrant, thanks to the new development that includes one-, two- and three-bedroom apartments. This will create what Rasch has called a “new pedestrian corridor” between Railroad and Castle streets.

“The alley between Castle and Railroad streets is a dead alley,” Rasch told the selectmen back in October. Not anymore, it won’t be — if all goes according to plan.

The alley runs south right between the old Great Barrington firehouse and the Mahaiwe Center for the Performing Arts. Asked if he and Rasch had ever considered making the firehouse part of their project, Nickerson said they are interested but have not been able to work out a deal with owner Thomas Borshoff.

Borshoff, a retired former CEO and president of First Federal Savings and Loan Association of Rochester, took the firehouse off the town’s hands for a mere $50,000 in June 2014, insisting he wanted to redevelop the 117-year-old building that was vacated in 2009 when the fire department moved into its new $9-million facility on State Road.

The town continues to rent back office space from Borshoff for its health and building departments, even as Borshoff has done little work on the building. The town is eager to move the two departments out of the decrepit building and has even issued a request for proposals  to sublet the spaces until its lease runs out in 2020.

Meanwhile, Nickerson could barely contain his excitement about the 47 Railroad project. Workmen from Alander Construction were in practically every corner of the building. On the tour he gave this reporter, Nickerson pointed to the development’s energy-efficient features and its large windows, including four large window bays in the ground-floor restaurant space with grand views of Railroad Street.

The restaurant space has been enlarged from the original plans, thanks to the acquisition of Martin’s, which enabled Framework to take out the wall that had divided Martin’s and Mario’s.

Upstairs is perhaps the most striking feature of the project. There will be what Nickerson said are 13 “well-appointed” apartments on the second and third floors. The fixtures and appliances are sleek and designed to appeal to millennials or perhaps even hip retirees who like the idea of simply taking the new elevator downstairs to dine at one of many restaurants within a 60 to 90 second walk.

When the project is finished there will be four dining choices on Railroad Street alone: Allium; Bizen; 20 Railroad Public House; and the as-yet-unannounced eatery going into the space that formerly housed Seeds.

And over the second floor of the building facing Railroad Street will be a large rooftop deck or patio. The deck resembles an outdoor space at a fancy Manhattan penthouse but it will be communal — for the use of all residents — and can even be rented out for parties.

“There will be great views not only of Railroad Street but of East Mountain,” Nickerson said.

Both Rasch and Nickerson have a passion for adaptive reuse of historic buildings, so they are going to be selective in terms of which retailer they rent to. Rasch has said the tenants will be “curated,” to give priority to those who will “enliven” the area.

That observation was presumably a reference to complaints often heard from business advocates that there are too many banks and real estate firms that don’t bring foot traffic to Main and Railroad streets. Nickerson said he and Rasch have held talks with potential retail tenants but added that it was too early to disclose their identities. And there is already a waiting list for the apartments.

Before the building was a restaurant, it was a NAPA auto parts store and before that, a granary. The auto parts store was used as an exterior location for “Before and After,” a movie starring Liam Neeson and Meryl Streep and released in 1996.

“We have such a nice downtown that other communities are envious of,” Nickerson said. “This will be urban living in a small town.”