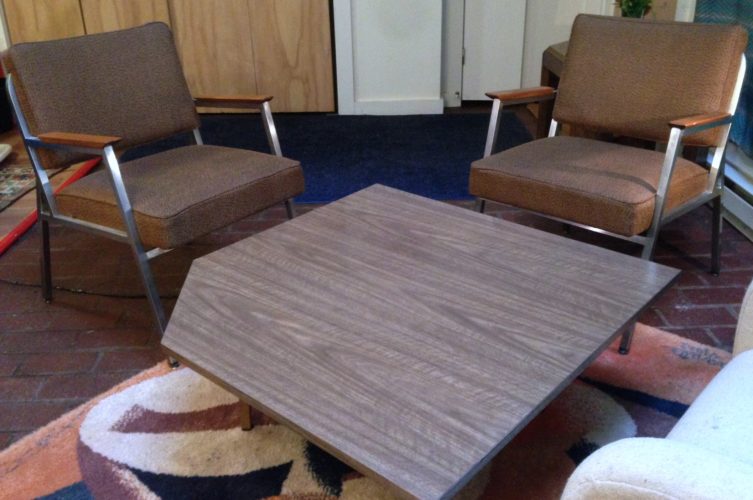 With 2014 just entering its second half, I’ve already had the fortune of finding a table and pair of chairs made by Howell, a company once confident enough to dub itself “America’s first and foremost manufacturer of modern metal furniture.” Since these finds were inexpensive, useful, durable, and fetching enough for a semi-permanent spot in my living room, the maker is not of primary importance as it often is when considering a piece of retro furniture. But Howell’s furniture (not to be confused with that resold by the Texas Howell Furniture chain) has impressed me enough through its design and materials, as well as its resale value, to find a spot on short list of small 20th century American furniture companies worth knowing about.

It tends to be the case with furniture built by small American design and production companies in the early to mid 20th century that the fortune cookies of info gleaned from paper stickers or tags and stamps in the wood and metal on my vintage finds lead to appealing stories that read like parables of modern industry: originality, innovation, and eventual decline. Small furniture companies, so my years of reading up on cool and strange old things have led me to conclude, tend to grow larger or go out of business. This makes Howell’s run all the more impressive, producing iron and steel home goods from the beginning of the Reconstruction Era until the company’s 500 workers could listen to Kate Bush on Sony Walkmen.

The W.H. Howell Foundry opened in Geneva, Illinois in 1867, producing casting iron doorstops and stove-heated irons.  After electric irons swept the consumer market in the 1920s, Howell was purchased by a pair of foreword-looking entrepreneurs who refocused the factory’s efforts onto the production of steel-framed furniture. Their inventive line of bent chrome-plated tubular steel furniture was a national hit in 1933. Demand for the patio collection was so high that two additional manufacturing sites were quickly opened despite the country’s dire economic climate, and Howell’s designs earned a display at the 1933 Chicago World’s Fair. After the market crash closed the Cable Piano Company of St. Charles, Illinois, Howell moved into the large factory in 1937.

By the mid-1930s, Howell was best known for employing the talents of Viennese designer Wolfgang Hoffmann. A stylistic contemporary of Miles van der Rohe and Le Corbusier, Hoffmann introduced a fresh breath of the European avant-garde to Howell’s tubular steel. His father was the celebrated architect and designer of consumer goods Josef Hoffmann, a Jugendstil bigwig who co-founded the Vienna Secession movement along with Gustav Klimt in 1897 and mentored a young Egon Schiele during his first exhibitions.

Wolfgang migrated to the States in 1925 and soon picked up high-level private architecture assignments, including the opportunity to develop the color scheme for the 1933 World’s Fair. His work caught the attention of Howell’s top brass, and Hoffmann was hired to helm the small company’s design arm in 1934. He remained at this post until 1942 and left an enduring stylistic imprint on Howell’s designs.

When America joined the Second World War, Howell’s approximate 500 employees redirected a significant portion of their efforts and resources to constructing incendiary and fragmentation bombs, artillery shells, and airplane wings. The Navy commissioned a line of steel mess trays from the company, which must have ranked among the most chic pieces of dining ware in the South Pacific. After the war, Howell’s trendy and affordable home furnishings for the home and office were a favorite among returning GIs and their nascent families.

In 1954 the company was purchased by its longtime supplier Acme Steel, marking the introduction of bronze detailing and plastic laminate tabletops. It is furniture from this era — the post-Hoffman and Acme years — which I’ve been seeing on the local second hand market, and its utilitarian value is self-evident. Howell was bought out for a final time in 1975, and within four years the new owners faced financial instability coupled with a worker strike by members of the International Association of Machinists. Though the strike was resolved in 1979, the factory never reopened and its equipment was sold in 1980.

The subtle elegance of Howell’s furniture first caught my eye when I responded to a craigslist ad in January.  The listing portrayed a matching pair of chrome-plated metal frame office chairs with a buoyant lounge-like style. I called the owner while looking at the web page and asked when I could come take a look.

“When are you free to meet?” he asked.

“How about right now?” I responded.

Forty-five minutes later I stepped out of my car onto Connecticut soil. The friendly young man, a flea market hobbyist, welcomed me into his living room where the chairs, much nicer than his photos had suggested, rested together in a shaded corner. I knew at first blush that I’d be leaving with them in the back seat, but stayed for a short while chatting about retro furniture and the sprawling thrice-annual Brimfield flea market, held just over an hour East of exit 2 on the Mass Pike. 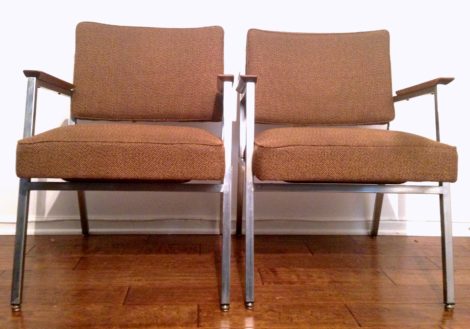 The streamline style of these chairs, which look from the side as if their physicality is a moment of universal movement locked in space, instantly read as a good find. Howell’s chrome-plated tubular steel frames bent into weightless and dynamic forms, supple and springy upholstery in a lively shade of brown that once seemed ubiquitous in public buildings and offices, and dark grained hardwood armrests form a classic but playful look and feel that hasn’t been in vogue since the early 1970s. For less than the cost of filling my Honda Civic’s tank, I had no question that a profit would be waiting if I ever choose to pass them onto another owner. Perhaps their fourth, perhaps their fiftieth.

Aside from the covetable scarcity of this look, the chairs are all the more desirable due to their ergonomics. When Howell branched into office furniture after the war, they didn’t leave a shred of comfort behind. These would be considered lounge chairs today given the luxurious look and feel of the seat cushions and their curvature, reclined backrests, and upward sloping armrests. As a result they function equally well around a coffee table or on a porch as they do at a desk, fitting harmoniously into any room featuring exposed wood or silver-colored metal.

My plan was to sell them for a quick profit, learn a bit in the process, and use the resulting funds to invest in something higher-end. Half a year later they’ve become staples of my home, spending most of their retirement in the living room and summering in my bedroom.  The crisp red and white Howell stickers on the bottom of each chair left an impression, which joined me on a visit to a Berkshires Salvation Army in May.

After poking around each shelf and deciding that none of the material evidence of other peoples’ lives was destined to become part of mine, even temporarily, I walked toward the exit. An elderly man seated on a gaudy sofa smiled at me as I walked past, and as I turned to smile back I spotted the coffee table stationed in front of the couch. It had been placed on display as he was sitting there, the man told me when I walked over to take a closer look.

The table was like none I’d ever seen. It was solid wood with a fine laminate finish (I tend to avoid laminates as they often correlate with lower-end vintage furniture, but this was an exception) and a fascinating shape. The low coffee table formed a perfect square, three feet by three feet, except for one corner which is flattened as if someone had spit their chewing gum into a bar napkin and folded a single corner over it.

As the man on the couch chuckled at my efforts I lifted the table and tilted it on its side to inspect the legs. I expected confirmation that this neat piece of design came from the early 1980s, maybe late 1970s, and was built of crummy materials. To my surprise the legs appeared to pre-date my expectations, hinting at the 1950s or 60s. Strong, tubular bronze-colored rods capped in clean white feet were bolted to the table’s solid underside. And the flat corner wasn’t a DIY custom job. It was factory made, and the thick, high quality laminate joined perfectly at each of its symmetrical edges.

Gravity did the rest for me as the table slowly tilted upside down and revealed the Howell sticker in the center. This label was different than the others, older. It was white with boxes for factory workers to hand-write the lot number, model number, color, and design. These boxes weren’t filled out (they rarely are), but the label itself helps establish age. It also shared the name of the specific furniture line: “Imperial Walnut.” Though the date box wasn’t filled out, the materials place this piece after 1955 when Acme bought Howell, but clearly a decade or two older than my chairs, which can’t be from after 1975

When in the presence of an old object that tugs at your belt buckle regardless of where you direct your feet, I recommend grabbing the thing with both hands and flipping it upside down. You’ll be interested in what’s to be found on the base. Dates, names, construction details, the original color (if something has been repainted) and other details will, if on the object at all, most likely be where it can’t be easily seen. If the thing is too massive to rotate in your hands for a glance at the undercarriage, then tilt one edge up, set your phone to flashlight, and give the hardest peek you can muster. For those seeking the uncommon, don’t dismiss second hand stores merely because they’re considered trendy by some and thus barren by others. In future entries I’ll show you some recent thrift store treasures that will hopefully fire up those who think that the retro and antiques markets are all picked-over and prohibitively expensive.