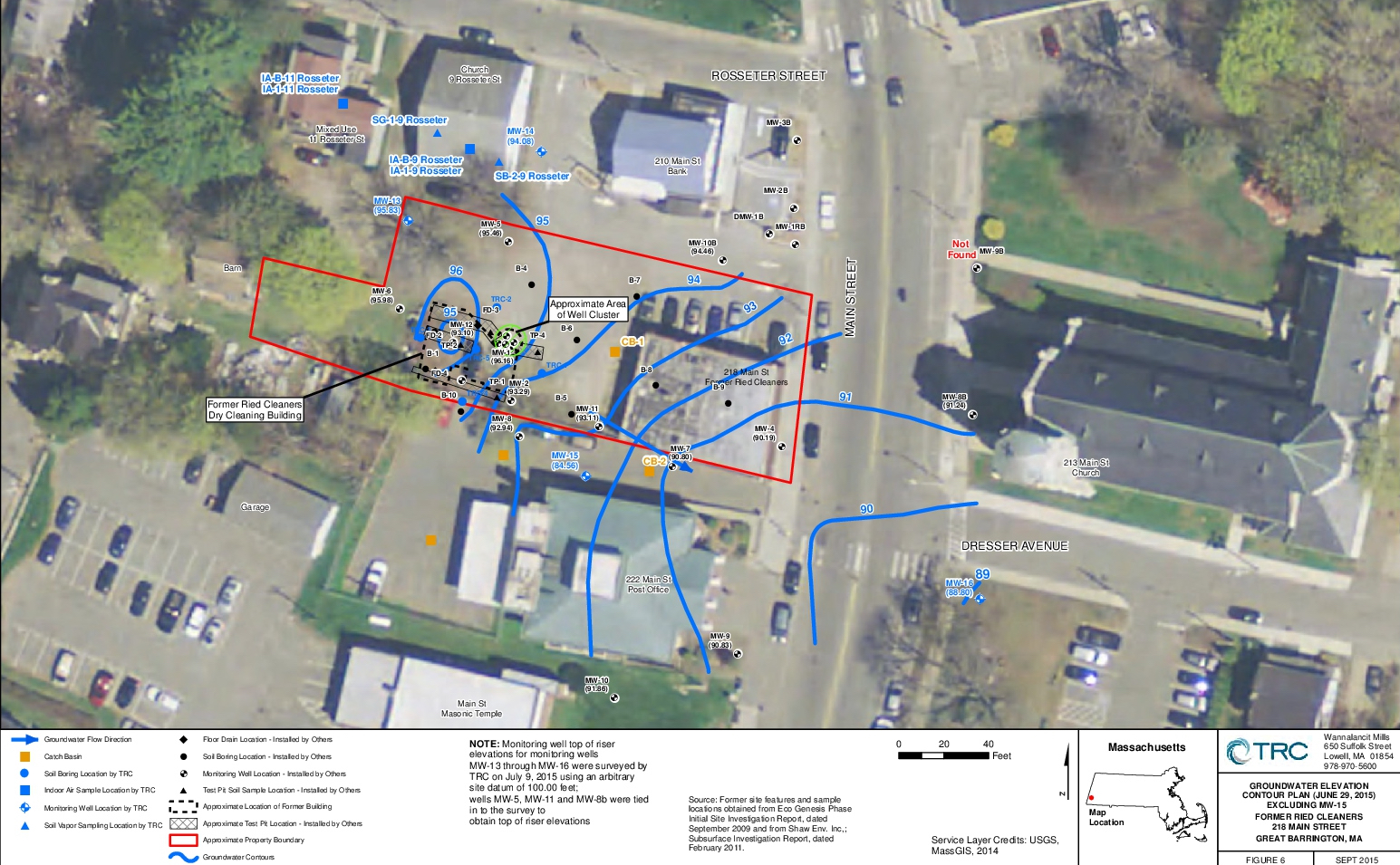 Great Barrington — A failed 2012 offer to purchase the former Ried Cleaners property on Main Street illustrates not only the liability and costs of cleaning up environmental pollution, but also raises questions about who should do it, especially when it becomes a public health issue. The contamination, spreading through groundwater, is known to have spread its vapor to several nearby buildings. The full extent of affected areas is still unknown.

According to an environmental study known as an “Interim Phase II Comprehensive Site Assessment Report,” completed September 2015, the contamination is also an ecological threat since it is flowing towards the Housatonic River, and may already be there. The study was paid for by a $91,000 state grant.

The building has sat vacant for almost 10 years. A half dozen offers were made on the property since the owners of the dry cleaner retired in 2006 after 54 years of business, but each one fell apart over the contamination, the price or both. Before extensive contamination with various carcinogenic and neurotoxic chemicals was discovered, the property was valued at $795,000. The listing price is now $169,000, and the Ried family owes at least that amount in back taxes and money owed to the state for the Phase II study, and Massachusetts Department of Environmental Protection’s (MassDEP) work at the site. The family ran out of money to continue to pay for studies, or to begin a clean up that is estimated at $1.6 million.

Mike Arnoff was first to make an offer. Arnoff is the president of Arnoff Shipping and Moving, a Dutchess County, New York-based company that for years also ran Arnoff Pack & Ship next door to Ried’s in the current Salisbury Bank location. He leases the building to the bank, and told the Edge he had a right of first refusal on the Ried property. In 2012 he offered to purchase it for around $100,000 and to remediate it, but wanted MassDEP to release him from future liability.

“If I was going to clean it up,” Arnoff said, “I thought the state should release me. Once I got the cost of the cleanup, and looked at my business plan, the numbers didn’t work. You can’t rent space in Great Barrington for enough to pay off the debt to have that work done.”

Arnoff, who said he cleaned up a brownfield in Dutchess County, planned for retail and office space on the Ried site. Last fall, local developer Jeffrey Cohen of Renaissance Mills LLC had a similar plan in mind, offering $100,000 for Ried’s. He planned to remediate the site. Cohen’s offer was rejected, likely because it wasn’t enough to cover the Ried family’s debts to the town and state, according to Eric Steuernagle, Managing Broker at Isgood Realty, which lists the property.

“If government and business are going to work together on these situations, then there’s got to be a little give and take,” Arnoff said. He added that he went to Springfield and sat down with MassDEP representatives to try to come up with a solution. “I said you have a problem with this property. Let’s knock it down, let’s put down a membrane, blacktop it and make a public parking lot. They laughed at me.” Arnoff said he spent $30,000 on his own Phase II study, and said he didn’t understand why the state’s study was $91,000.

But Arnoff’s bank building is listed in the study as one of several that may have had “on-site vapor intrusion” from the “contaminant plume.” The others are the Post Office, 9 Rosseter Street (Macedonia Baptist Church) and 11 Rosseter Street. Both 9 and 11 Rosseter — both behind Salisbury Bank — had levels below MassDEP risk standards, but the report said samples should also be taken during winter since contamination levels can be higher in winter-sealed buildings, showing “worst case conditions,” according to the report.

The Masonic Temple on the other side of the Post Office was also tested, but the results were insignificant, according to the report.

Arnoff says he had installed air quality testing wells before the bank signed their lease. “The air quality in my building is perfect,” he said, noting that it was tested again last year. The Phase II report obtained by the Edge confirms that in 2010 there was no “impact” to indoor air.

“Everything is flowing away from my building,” he added. “It’s flowing towards the Post Office and the [First Congregational] church, and down Dresser Avenue. The report shows it all running that way.”

The report confirms this, and says postal workers exposed to basement air are at “chronic risk” due to naphthalene, tetrachloroethylene (PCE) and trichloroethylene (TCE). The vapor has apparently migrated upstairs, however. Testing in 2013 revealed PCE concentrations at levels that “exceed commercial IATVs in one of the four samples collected on the main floor.” IATV stands for “indoor air threshold value.”

Great Barrington Postmaster Mike Wickowski said while he didn’t know much about the situation, he thought tests and monitoring were “ongoing.” He added that there have never been any restrictions on postal workers’ movement in the building. He said the basement is mostly storage, and workers do sometimes go there. “Most of the activity is on the main floor,” he said.

MassDEP spokesperson Catherine Skiba said that like Arnoff, the USPS has its own consultant working on the issue. The US Postal Services’ Northeast legal office in Windsor, Connecticut did not return calls for comment, though MassDEP correspondence shows that the US Postal Service in Brockton received results of groundwater sampling and other tests.

Correspondence also shows the town manager and the Board of Health are aware of the air quality issues and testing, and the full results of the Phase II report.

Meanwhile, contamination with a dizzying array of chemicals that leaked out through Ried’s floor drains is spreading through groundwater — and/or bedrock — under the town. The report says groundwater moving more deeply underground or in bedrock may move the contaminants along more quickly, ultimately discharging them into the Housatonic River or passing beneath it.

While concentrations of volatile organic chemicals (VOCs) in shallow groundwater dilutes as they move away from their source, the report says PCE concentrations “in two wells on the eastern side of Main Street are slightly above MassDEP GW-1 drinking water standards.” According to MassDEP, GW-1 is “groundwater that is either a current drinking water resource (e.g., within a Zone 2 of a public water supply) or a potential future source of drinking water, such as a Potentially Productive Aquifer.”

The reason the report is vague about the full extent of the contamination, is that the grant money ran out. The report says that “currently, only one monitoring well extends as far as the till strata at 40 feet and there are no monitoring wells extending to bedrock.”

And there are no monitoring wells beyond one at the corner of Dresser Avenue and Main Street at the Mason Library, making it unclear how far east the pollution has traveled. As of Thursday evening, the well appeared to have been removed, leaving a deep hole in the ground.

“We drilled almost to bedrock and [the contamination] was still there,” Arnoff says, referring to the results of his study. He says this is where the deep pockets come in –– and the potential for deep liability. He also said he was stunned by estimates to truck the soil at the Ried site out to a special landfill in Ohio that will take these particular chemicals. The Ried family also conducted studies, and according Ried family attorney Edward McCormick, the estimate to truck that soil to the Midwest ran to around $1 million.

More studies are required to complete the Phase II, including the migration of groundwater and whether it’s flowing through “pathways along utility lines to the north toward Rosseter Street and East along storm sewer lines from catch basins between the unoccupied Ried building and the Post Office…”

The concern at the Post Office is that harmful vapors are coming in through the basement sump pump, the report says. Photos from 2009 show standing water and occasional flooding in the Post Office basement.

The bedrock groundwater will also have to be tested. If contamination is detected there, “bedrock fractures” would be tested; that involves “placement of multiple bedrock wells on both sides of the Housatonic River.”

At least one more round of indoor air testing between the months November and March, will also be required at 11 Rosseter, 9 Rosseter, and 210 Main Street, the report said. And Phase III will involve a feasibility study for remediation at the Ried site and the Post Office.

“As a property owner in a beautiful little town there’s nothing I’d rather see than that property cleaned up,” Arnoff said. “That’s helps my property value, it helps the town.”