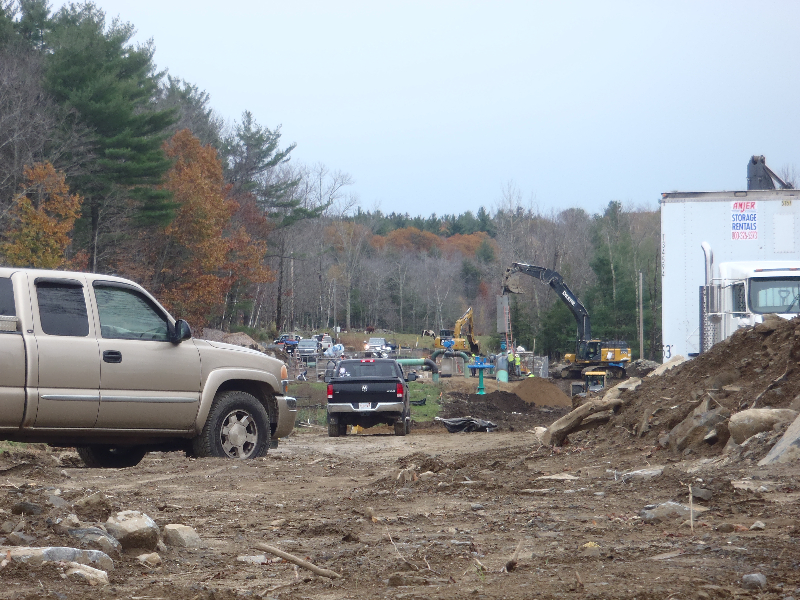 Sandisfield — An energy company and its contractor have agreed to pay the state and the town of Sandisfield a combined total of $800,000 for damages to the environment and local infrastructure during the company’s construction of a natural gas pipeline through Sandisfield and the Otis State Forest in 2017.

In a statement issued Monday night, state Attorney General Maura Healey said the Tennessee Gas Pipeline Company, a division of Kinder Morgan, and its contractor, Henkels & McCoy, reached a settlement with Healey’s office to pay $300,000 in penalties and payments to the Massachusetts Natural Resource Damages Trust to settle allegations that they violated environmental protection laws when their workers damaged a vernal pool and other protected wetland resources areas, degraded water quality in a cold water fishery, and discharged 15,000 gallons of contaminated pipeline test water directly onto the ground during construction.

Tennessee Gas has also agreed — separately and at the request of Healey’s office — to fund the paving of 4 miles of Cold Spring Road in Sandisfield, which took quite a beating during the pipeline construction.

“Tennessee Gas repeatedly assured the state and Sandisfield residents that water quality and wetlands would be protected during pipeline construction, but they failed to make that happen,” said Healey. “My office will continue to hold accountable those who violate our critical environmental protection laws. The paving of Cold Spring Road greatly benefits the town, whose residents suffered through the disruption caused by pipeline construction.”

Healey said Monday’s consent judgment resolves claims in a complaint filed by the AG’s office alleging that Tennessee Gas and Henkels violated the state’s Wetlands Protection Act and the Massachusetts Clean Waters Act and their corresponding regulations when the companies failed to maintain required erosion and sedimentation controls.

That failure resulted in soil and sediment runoff into more than 630 square feet of wetlands. Violations also occurred when they excavated and filled portions of an ecologically important vernal pool. The AG’s office further alleges in its complaint that by shutting down a required dewatering pump, Henkels caused a breach that temporarily degraded water quality in Spectacle Pond Brook.

According to the AG’s complaint, the companies also “unlawfully discharged 15,000 gallons of contaminated pipeline test water directly onto the ground adjacent to Tennessee Gas’ pipeline compressor station in Agawam.”

“The commonwealth’s wetland regulations are there to ensure that wetlands, waterways, and their surrounding ecosystems are protected from any negative intrusion,” said Commissioner Martin Suuberg of the Massachusetts Department of Environmental Protection. “This settlement requires Tennessee Gas and Henkels to make a significant contribution to the Natural Resource Damages Trust, which will directly benefit wetland resources in the commonwealth and is in addition to the requirement to restore the wetlands damaged during the pipeline construction.”

Healey’s office quoted Sandisfield Board of Selectmen Chair Brian O’Rourke as saying: “This agreement will also make sure Tennessee Gas Pipeline honors the commitments they first made when the pipeline expansion project started. The town of Sandisfield would not have been able to do this without Smitty [Pignatelli] and the attorney general’s team.”

“This has been a long time coming but, without the commitment from the attorney general’s office, this never would have been resolved,” said state Rep. William “Smitty” Pignatelli, D-Lenox. “Standing up for the town of Sandisfield has always been my priority. To see this stretch of roadway properly repaired gives me great hope that when we work together, David can take on Goliath and win. The company has finally done right by this community.”

See Edgecast video below produced by Ben Hillman and narrated by Jim Frangione. The report, which features Pignatelli, includes startling footage of how pipeline giant Kinder Morgan had conducted the clearing, guarded by men with assault rifles and body armor, of a working farm in Pennsylvania to make way for another natural gas pipeline:

“I appreciate the Attorney General’s efforts throughout this process,” added state Sen. Adam Hinds, D-Pittsfield. “It is unfortunate that laws in this country dictated this outcome. This is actually the least Tennessee Gas can do. This project violated Article 97 land in Massachusetts, moved forward despite widespread local and state opposition, and destroyed local forests and roads in the process. Sandisfield residents deserve this at a minimum.”

Hinds and other public officials have long argued that public lands in the state, such as the Otis State Forest, are supposed to be protected by Article 97 of the Massachusetts Constitution, which says “the people shall have a right to clean air and water … and the natural scenic, historic, and esthetic qualities of their environment,” with the fulfillment of these rights to be carried out through state parkland acquisition and conservation.

Tennessee Gas has agreed to contract with Palmer Paving Company in Springfield to pave the 4 miles of road in Sandisfield at a cost to Tennessee Gas of more than $500,000. The paving is expected to begin next week. Tennessee Gas had previously repaired damage to Cold Spring Road from truck and equipment traffic during pipeline construction, but the road’s condition has since deteriorated.

The pipeline and its construction caused enormous controversy and unrest in Berkshire County and beyond. There were numerous demonstrations organized by a variety of groups. There were several attempts to prevent the companies from completing their work.

Dozens of people, many of whom charged the state police with bias, were arrested and some were charged with trespassing and disorderly conduct. Both Pignatelli and Hinds visited the site. Hinds met with protesters in July 2017.

See video below of state Sen. Adam Hinds speaking with activists near the pipeline construction site in July 2017: