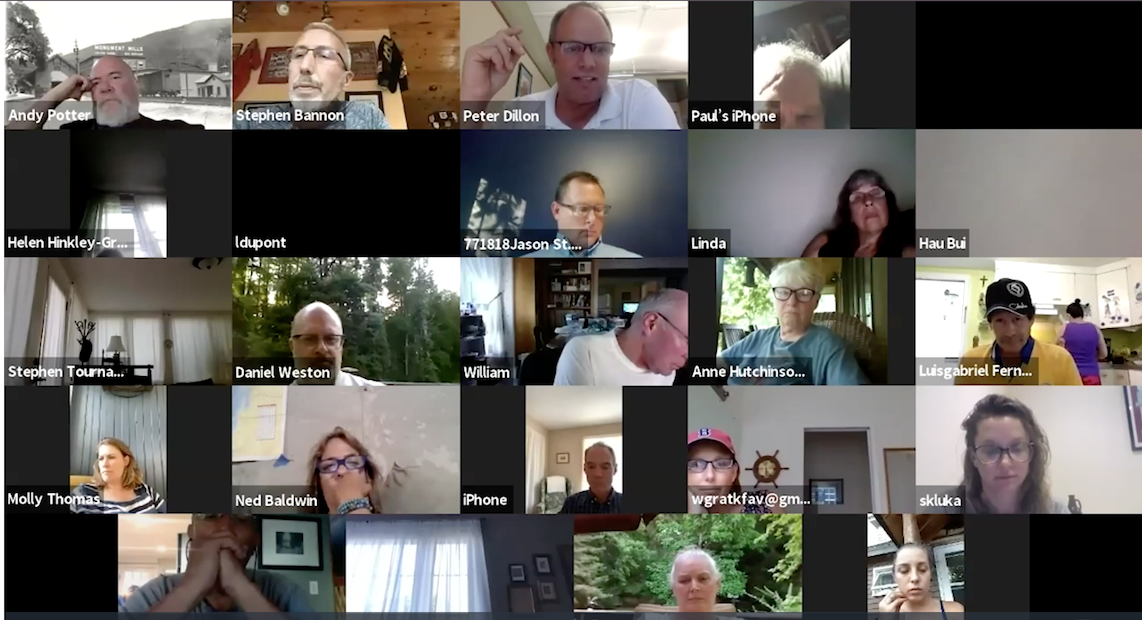 In an about-face, Berkshire Hills Superintendent Peter Dillon has proposed to start the 2020-21 academic year with remote-only instruction. Image courtesy Community Television for the Southern Berkshires

Great Barrington — In a reversal from a recommendation he made a couple of weeks ago, Berkshire Hills Regional School District Superintendent Peter Dillon advised the school committee Thursday night to open the district’s schools with a full remote-learning-only program until conditions warrant a change

Dillon had initially proposed a hybrid model that offered remote learning combined with a physically distanced on-campus program in which no more than half the students would be in the schools on any given day. The other options were a continuation of remote-only learning or a return to a more conventional face-to-face environment on-campus.

After presenting the hybrid model last month, both Dillon and the school committee saw aggressive pushback from the Berkshire Hills Education Association, the labor union that represents the district’s teachers. The BHEA countered that being asked to participate in in-person learning puts “our health, possibly even lives, and those of our family members, on the line.” Click here to read a letter to the editor to The Edge from BHEA members.

Dillon’s new proposal is essentially an extension of what Berkshire Hills attempted after school closed March 14 when, in the face of the COVID-19 public health crisis, Gov. Charlie Baker issued a series of executive orders that eventually closed the schools for the rest of the academic year. A technology-based distance learning model was instituted at Berkshire Hills in place of an in-person program, as planning began for what form a reopening in the fall would take.

Dillon insisted, however, that the new online learning program he is recommending would be a substantial improvement over the one used during the spring. The latter program was the result of a hastily organized plan put together by educators with very little warning or guidance from the Baker administration.

At one point during the public hearing on the proposal, more than 160 people were participating on Zoom, an online video conferencing platform. Click here to see the video record of the meeting courtesy of Community Television for the Southern Berkshires.

“I want to acknowledge the impact this is going to have on everybody, especially students and parents,” Dillon said. “We’re in the middle of really challenging times, and are going to have to find out additional ways to be flexible and support really thoughtful learning, so we’re going to make our best effort at it.”

Several parents raised questions about the proposal, which would reduce the number of school days for the 2020-21 academic year from required 180 to 170, a reduction allowed during the public health crisis by the state Department of Elementary and Secondary Education. The first day of school will be Monday, Sept.14. Staff will report Wednesday, Aug. 26, and undergo 11 days of professional development.

Thursday, The Edge published a story by educator and Edge contributor Sheela Clary titled “Voices of parents: What local parents think about their schooling options for the fall.” Click here to read it.

The sharpest inquiries came from Great Barrington resident and parent Brian Grossman, who immediately raised questions about the composition of the 29-member reopening task force, which Dillon assembled and which produced the initial 49-page reopening plan.

“I was dismayed for a number of months at the lack of parental involvement in the process itself,” Grossman said. “Then [only] in the last three weeks or so were parental comments solicited.”

“I also ran a series of forums,” Dillon added. “They were attended by staff, parents and, in some cases, students. In total, I spoke with around 400 people.”

Grossman noted that the infection rate in Berkshire County was far lower than elsewhere in the state, particularly eastern Massachusetts.

“So it’s extremely low right now,” Grossman said. “If we are waiting for another time to bring in kids that’s safer, what is safer than almost no coronavirus? What is the science we are waiting for? Is there a possibility that there we can go back to school when there is a low period of coronavirus?”

It should be noted that since Thursday night’s meeting, Gov. Charlie Baker announced Friday afternoon that he was postponing the second step of the Phase 3 reopening plan. In doing so, Baker cited compliance violations, including large parties, that evidently have caused new COVID-19 clusters.

See video of Gov. Charlie Baker and members of his administration announcing the postponement of the second step of the Phase 3 reopening plan:

Others noted that most of the region’s private schools, such as Simon’s Rock, plan to reopen with in-person learning in one form or another. Berkshire School, a private boarding and day school in Sheffield, is giving parents and students the option of either on-campus learning or a remote program it calls “virtual learning.” Miss Hall’s, a boarding and day school in Pittsfield, is following a hybrid model. Miss Halls’ expects some students to return Monday, Aug. 24, “in staggered intervals” and all will be tested for COVID-19 on their arrival.

Dillon said he is hoping DESE identifies a regional metric “that we can use as a basis going between the three phases … but we don’t have it at hand. I will have it hopefully by the middle of next week. I do agree that the spread rate is low now in Berkshire County.”

It is “highly likely,” Dillon added, that the district will shift gears from all-remote to hybrid and, if conditions worsen with another spike later this year, hybrid back to remote.

Other parents had questions about households in the district and in the choice-in towns that lack sufficient internet connectivity. Still others asked about the efficacy of distance learning for special education students and those for whom English is a second language.

Dillon acknowledged there are real shortcomings in dealing with all of those populations but insisted his staff was working on it and would do whatever they could to accommodate them.

Later in the meeting, school committee member Rich Dohoney, who initially said he favored a hybrid model, was visibly upset at the idea that students with special needs would be especially ill-served by a remote learning plan.

“The remote model provides no education whatsoever to them,” said Dohoney, a Great Barrington resident. “The decision we make tonight is leaving them out to dry. We have a responsibility to meet weekly until we have good firm answers to those questions.”

There were also concerns about what happens to athletics, music and other extracurriculars during a remote-only model.

In the end, all 10 members wound up voting for Dillon’s proposal. And by a vote of 6-3, the committee approved Dohoney’s motion that the committee convene in public session weekly to stay abreast of what is being done to help students with disabilities. Bill Fields of Great Barrington, Andy Potter of West Stockbridge and Dan Weston of Stockbridge voted against the motion.

Weston is a teacher in the Southern Berkshire Regional School District. Fields, who taught history at Monument for 40 years before retiring in 2009, said he thought teachers needed time to come up with better programs for those students before reporting to the committee.

Dillon asked anyone who had questions that they were not able to ask him last night to contact him at peter.dillon@bhrsd.org.