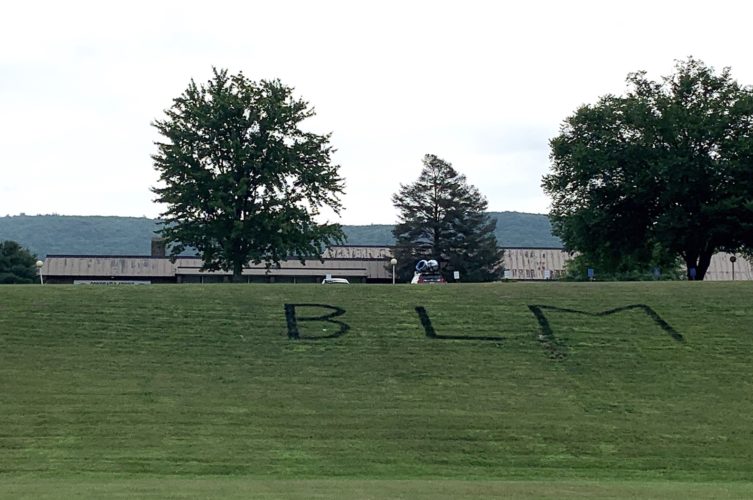 Monument Mountain Regional High School sits atop the hillside in northern Great Barrington. It remains to be seen what kind of learning will take place in the building when school begins. The Black Lives Matter symbol was painted on the hillside earlier this month by a person or persons unknown, Superintendent Peter Dillon said. Photo: Terry Cowgill

Great Barrington — In plotting a path forward after months of pandemic-induced distance learning, public education officials in southern Berkshire County are planning for all contingencies and are emphasizing that the goal of reopening their schools is very much a moving target.

“Our initial goals are sort of obvious; there are four of them,” said Berkshire Hills Regional School District Superintendent Peter Dillon. “To ensure students’ and staff’s safety and well-being; meet the emotional and physical needs of students; support engagement and access; and support learning, rigor and growth.”

Dillon told the school committee at a Zoom meeting on July 14 that he has formed a task force of some 20 administrators, faculty and staff. Click here to view the meeting courtesy of Community Television of the Southern Berkshires. The discussion on reopening begins at approximately 06:30.

The task force needs to develop and share a plan for school committee approval, negotiate the plan with the affected labor unions, and then share it with the commissioner by Friday, July 31.

“As is a little typical, they have not given us a plan or template to work from, so like, 200 school districts working on this simultaneously from scratch, which is unfortunate,” Dillon said of DESE’s guidelines.

The task force has broken out into smaller groups working on a variety of different challenges, including: transportation, arrival and dismissal; what a typical academic day would look like; students who have special needs, whose native language isn’t English or those who are immunocompromised or have other health conditions; meals, cleaning and common spaces; nursing and emergency protocols; afterschool activities; mental health; and access to technology.

Dillon’s office has also sent out a survey to parents. Its primary purpose is to determine how many students will be arriving and departing in school buses so that the district can make the best use of its transportation resources. Most schools are anticipating that some parents will hesitate to put their children on buses out of concern for their positive exposure to the novel coronavirus. Dillon has since said the survey indicates a decline in bus ridership of between 20 percent and 30 percent.

In addition, school officials want to know how many parents intend to keep their children home regardless of which model Berkshire Hills decides to follow for reopening. Having that number will inform how the schools use their spaces.

“There may also be a subset of parents who respond to the pandemic by homeschooling their kids, as distinct from what we’re doing,” Dillon said.

If Berkshire Hills schools were to reopen with in-person learning, it is still unclear what that would look like. Dillon said the common physical distancing guidelines call for 6 feet between people, but DESE’s research has indicated 3 feet might be enough space between students in classrooms.

Director of operations Steven Soule and his team have measured the distance between different desk configurations in classrooms in the district’s three buildings and they think that, in most locations, the 6-foot standard can be maintained if nonessential furniture is moved out of those rooms.

Students from pre-kindergarten to first grade would not be required to wear face coverings because staff do not think it would be “developmentally appropriate.” But students from second grade and higher must wear masks throughout the day, Dillon said.

Airflow in Muddy Brook Regional Elementary School and Monument Valley Regional Middle School is more than adequate, Dillon said. Both buildings are only about 15 years old and have modern ventilation systems.

Monument Mountain Regional High School, on the other hand, is more than 50 years old and has antiquated ventilation systems. Dillon said Soule continues to work on possible airflow alternatives for the high school.

If the state or the school committee decides to go with a hybrid model, then students could be divided into groups so that one group comes to school, then remains home the next day while the other group comes to school. Or the district might go with a week-on/week-off model. Dillon said, at this point, his thinking is that the latter model makes the most sense.

How will the food situation be handled? Will students eat in the cafeteria or will the district bring food to the students and to individual classrooms? Dillon said the general feeling among task force members is to have food brought into classrooms. Athletics also remain a big question mark, as does the way in which middle school and high school students will move between classrooms.

Members of the school committee were full of questions and concerns.

“How do you put kids on a bus?” asked Sean Stephen of Stockbridge.

“How do you put kids in a classroom?” asked Dan Weston, who lives in Stockbridge but teaches in the Southern Berkshire Regional School District.

“How do you put teachers in the classroom?” asked Great Barrington’s Bill Fields, a retired longtime history teacher at Monument. “I talked to a [paraprofessional] today who is very concerned. She was telling me that she has a lot of fears, and in all this — the DESE stuff — never was staff mentioned.”

“Peter described a comprehensive committee that clearly has the voices of all considered,” added Rich Dohoney of Great Barrington. “I feel like everyone is well represented. That being said, this has to be driven by the science, not by the subjective opinion of somebody who will call a school committee member on a Tuesday and say what they think.”

“The big thing is there remains a lot of unknowns,” Dillon said. “We’ve really got our work cut out for ourselves.”

In a follow-up interview July 24, Dillon told The Edge he would have a draft plan to present to the school committee at its Thursday, July 30, meeting. Click here to see the agenda and its supporting documents.

At the Southern Berkshire Regional School District in Sheffield, Superintendent Beth Regulbuto told The Edge last week she and her team are, like Berkshire Hills, working on three potential models: fully on-site, hybrid and remote. But she emphasized that the models and plans are tentative and could be altered as events warrant.

“This is a first pass and plans are subject to change as additional guidance and information is shared with us,” Regulbuto said.

A reopening task force composed of more than 65 community members, school committee representatives, parents, teachers and administrators has met several times and has been hard at work planning for the three models.

Regulbuto shared a letter that was sent recently to families outlining the possibilities. Click here to read it. The task force also sent out an online “Fall Reopening Parent and Caregiver Survey.” To take the survey, click here.