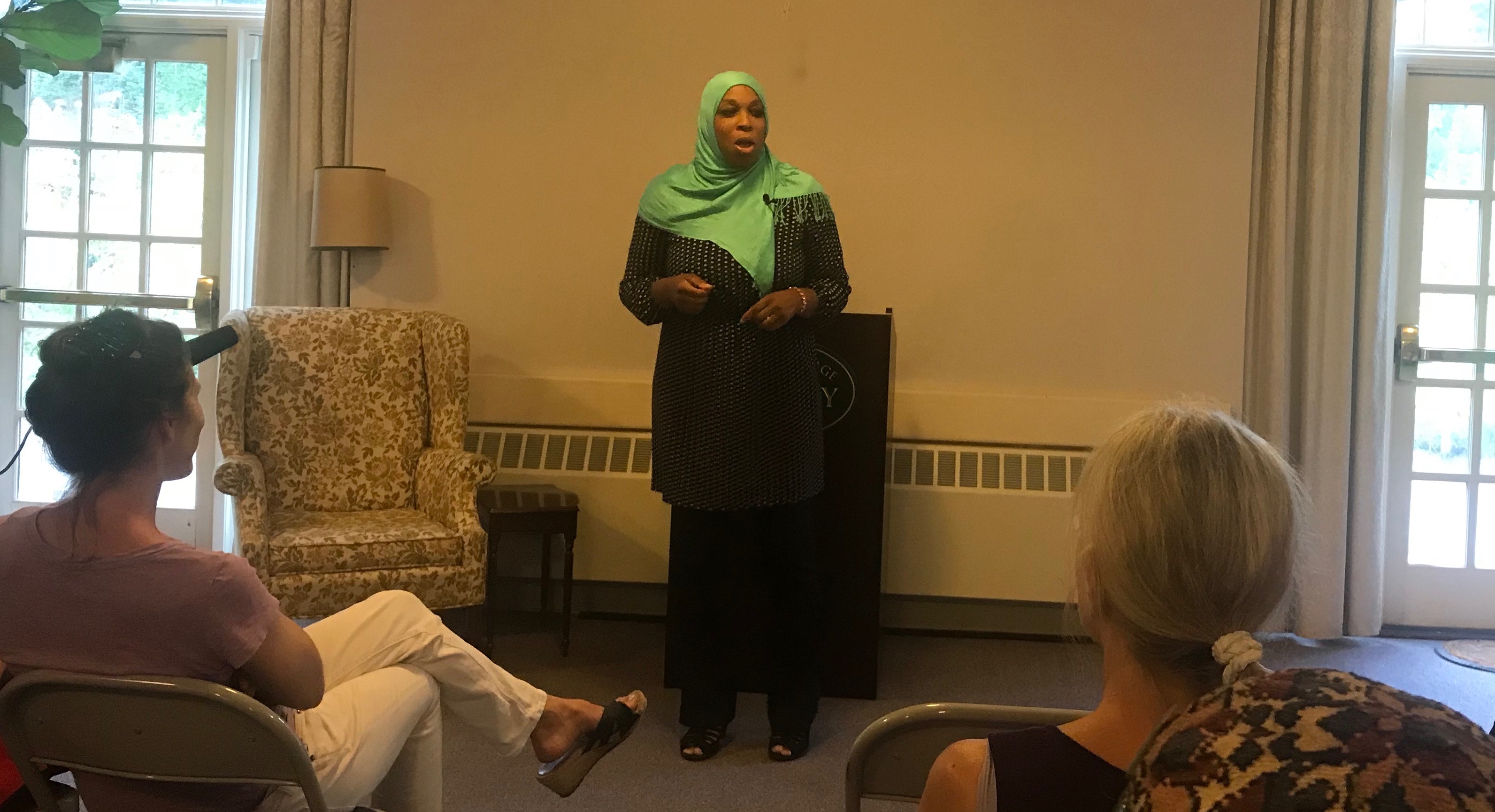 At a meet and greet July 23 at the Bushnell-Sage Library in Sheffield, Congressional candidate Tahirah Amatul-Wadud made the case for a new brand of progressivism in front of a crowd of 70 locals. Photo: Victor Feldman

Sheffield — Most people in Berkshire County probably haven’t heard of Tahirah Amatul-Wadud, much less that she’s running for congress. Amatul-Wadud wants to change that.

On Monday night, the Sheffield Democratic Committee held a town hall-style meet and greet with Amatul-Wadud at the Bushnell Sage Library, the latest in a string of campaign events she has made across more than 300 towns in the 1st congressional district. Click here to read Edge coverage of her appearance in Pittsfield in April.

In the downstairs hall of the library, Amatul-Wadud made the case for her candidacy and a new brand of activist liberalism to a crowd of roughly 70 attendees. A mother of seven and a black Muslim attorney who is only seen in public with her hair covered by a turquoise or lavender hijab, Amatul-Wadud is running to unseat 15-term Rep. Richard Neal, D-Springfield.

In her opening remarks, she pointed to Neal’s unwillingness to engage voters in Berkshire County, a symptom she believes results from his decades-long tenure in the House of Representatives.

“People all over this district have called me, messaged me, some of them are my friends, others are my clients…” she said. “They told me that the absence of their congressman has put a damper on their efforts to mobilize.” Heads in the audience bobbled up and down, nodding in agreement.

Tahirah Amatul-Wadud was born in Brooklyn and moved to Springfield when she was 9. She is a graduate of Elms College in Chicopee and Western New England University School of Law in her hometown.

Amatul-Wadud has been an activist her entire life, advocating for the rights of the victims of domestic violence and championing the virtues of a Medicare-for-all system. She has volunteered for the Massachusetts Commission on the Status of Women and is a member of the Family Advisory Council of Boston Children’s Hospital, where, as an infant, her 6-year-old daughter received open heart surgery that saved her life. Currently, Amatul-Wadud runs a successful legal practice in Springfield and, in 2016, she was named the “Top Woman of the Law” by Lawyers Weekly.

Amatul-Wadud is running for Congress to address what she believes are some hard truths about the living conditions in the district that Neal and others won’t talk about. She noted that the district is last in the state in median income, has the second highest rate of poverty and the second highest number of people living without health insurance. She has focused her campaign around criminal justice reform, Medicare for all and universal Internet access.

In contrast with her opponent, Amatul-Wadud has pledged not to accept any PAC money for her campaign, joining a cohort of Democrats running grassroots-funded campaigns across the country. She has said at previous events that she looks to other women of color like Georgia gubernatorial candidate Stacy Abrams and Sen. Kamala Harris, D-California, for signals on how she should craft her own campaign message.

Following her opening remarks, Amatul-Wadud opened the floor up to questions from the audience. Most of the concerns people raised revolved around local issues such as Internet access, basic infrastructure and protecting the environment in the Berkshires.

While Amatul-Wadud’s answers were short on specific proposals, she argued that, as an attorney and mother of seven, she’s a “problem-solver” and will work harder than anyone to fix the crumbling roads and schools across the district. One audience member challenged Amatul-Wadud’s claim to support common-sense gun control including universal background checks by asking why she wouldn’t take guns away from law enforcement as well. To this, she answered firmly, “I cannot support taking guns away from police and the military. As the mother of a black boy who drives, I am most nervous for his safety when he his pulled over on the road by police. However, the way to prevent gun violence is through education and building our communities.”

Amatul-Wadud told The Edge that, on the issue of health care, she and Neal have a genuine disagreement. She supports Medicare for all, her opponent does not. When asked to name other policies on which she and Neal differ, Amatul-Wadud noted that the main contrast between her candidacy and his lies in their priorities:

“I’m prioritizing economic prosperity through Internet access and education; he is not.” She continued to question Neal’s votes to increase the Pentagon budget while accepting over $300,000 in campaign contributions for defense contractors.

After the event, Amatul-Wadud took photos with her supporters. She exuded confidence, grinning as a teenage boy snapped a photo of her and a constituent. A couple at the event who wished for their names to remain off the record to The Edge said that, while they love Amatul-Wadud, they suspect she has a slim shot at winning. With the odds stacked against her, Amatul-Wadud welcomes the challenge. She has never run for office before, but hopes to score an Ocasio-Cortez-style upset victory in the Tuesday, Sept. 4, primary.