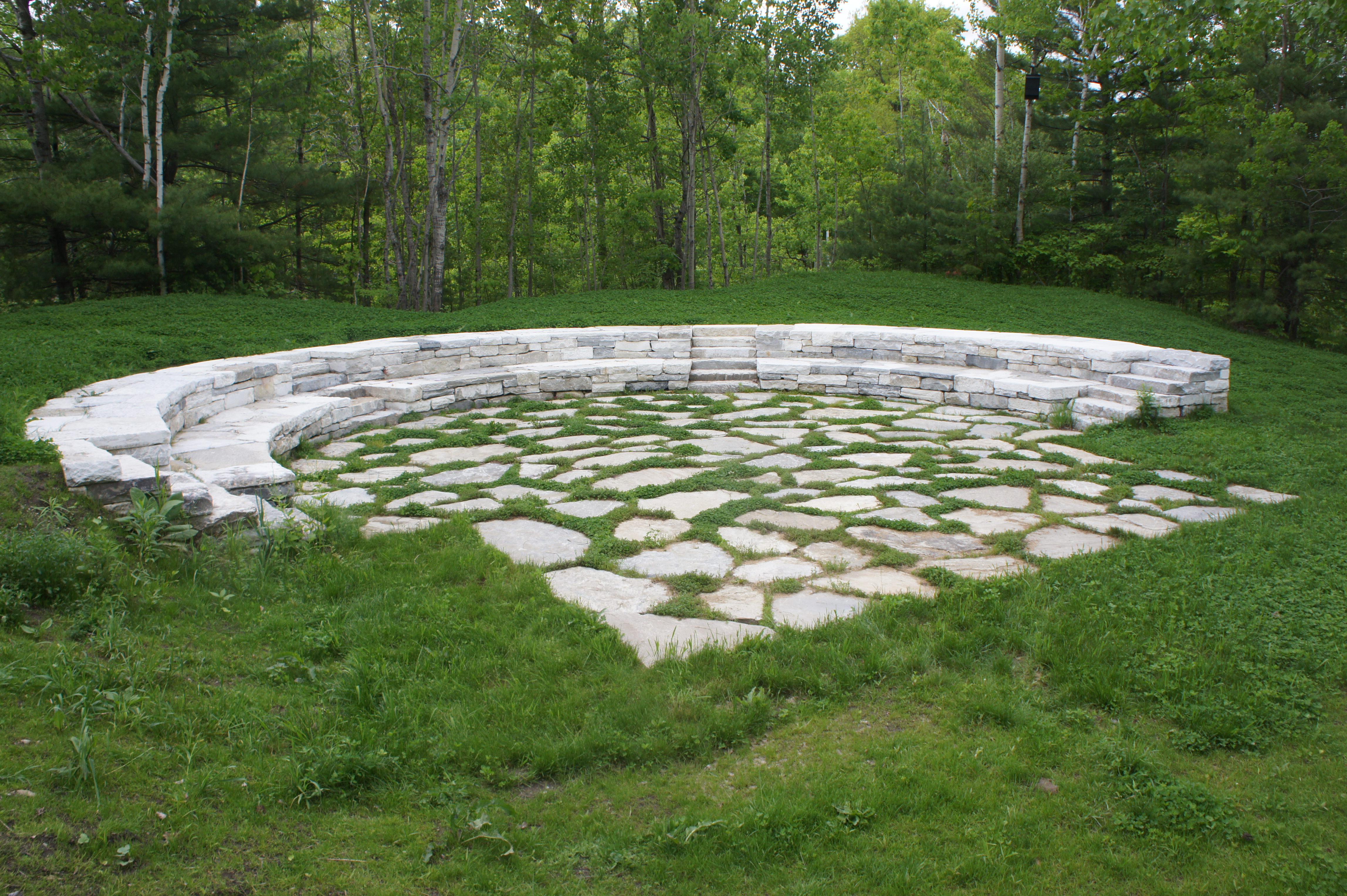 West Stockbridge — Just past No. 6 Depot, on an aptly named albeit easily overlooked Moscow Road, a unique series of outdoor sculptures beckons passersby to slow down and take a closer look. The entrance to Turn Park Art Space, a moniker that plays on its location just a stone’s throw from the Massachusetts “turnpike,” is itself a work of art: the gently undulating lines of the Gate House, through which visitors walk in order to enter the 14-acre property, echo the verdant Berkshire Hills that rise and fall in the distance. Turn Park Art Space opened to the public in mid-May and combines a sculpture park, exhibition venues, and a stone amphitheater for outdoor performances that invite equal parts investigation and relaxation.

My daughters and I visited Turn Park Art Space on a recent Sunday morning. Our initial impression — given that there were just a handful of other guests — is that of a veritable playground without borders that all at once invites exploration and imagination. A meandering crushed stone path winds through much of the former quarry and takes visitors through fields and woodlands populated by young silver and white birches. My kids, uncertain of what to expect, were pleasantly surprised by space that “suddenly gives way to a bunch of landscapes that look irregular — almost unreal — with giant beds of clover and a bunch of peculiar sculptures,” according to my 13 year old. She went on to comment on the often covert

sculptures, noting “no matter how strange the sculptures they are fascinating,” she added. Her favorite was a bronze and glass piece by Nazar Bilyk, entitled Rain. The 2012 sculpture features a nicely patinaed lifesize bronze sculpture of a human figure with a clear, glass orb resting on its upturned face. Another piece of particular interest was Discus and Shot Put, 1966, a hammered copper piece by Nikolai Silis that invited my kids to simultaneously strike the curved, athletic poses captured by the artist in his work. At present, the collection of 15 sculptures is primarily of the Russian Nonconformist Art Movement of the 1950s-1980s, a period following the death of Joseph Stalin in 1953 that left artists with more freedom to create nonsanctioned work without fearing repercussions.

The juxtaposition of man-made and natural elements continues throughout Turn Park, perhaps most notable in the balance of pristine marble slabs and encroaching patches of lush clover in the amphitheater. We were lucky enough to bump into Verne Tower, whose reputation as a great character completely obsessed with marble, was spot on. Tower, a stone mason from nearby Richmond, built the sprawling amphitheater from roughly 100 tons of marble blocks and slabs he had been collecting from projects over the years. He was waiting for something to build when he “crossed paths with Igor [Gomba], and this is the result,” he said gesturing to the distant creation that, amidst the thyme scented air, looks as if it belongs in the very shaded spot where it was built.

Tower’s knowledge of the former quarry is captivating. Part of the Lime Belt in Massachusetts, the limestone quarry off of Moscow Road went dormant in the post-Depression era that saw the falling off of quarry sites across the county. The quarry on the site of Turn Park “sat abandoned, really neglected” for some time, according to Tower. He went on to explain that limestone and marble are the same chemically — CaCo3 — calcium carbonate that all starts at the bottom of the ocean where, “due to lots of pressure, it is compressed into limestone.” He went on to explain that the limestone eventually “heaved up, folded back down again, under tremendous heat and pressure. As it cools it forms calcite crystals — all those shiny specks,” he says scooping up a handful of stone from the path beneath our feet — “and that is when it becomes marble,” he explains.

Turn Park is rife with space for contemplation. Chairs, lone and in pairs, punctuate the landscape and invite passersby to stop and interact with nature even if by simply sitting. There is a cacophony of sounds, from the trilling of birds to the hum of a neighbor’s lawnmower, and venturing to the park’s furthest edge offers a vantage point just high enough to look across the rooftops of West Stockbridge village including the Old Shaker Mill. The stillness that abounds is permeated by the din of traffic in the distance, often starkly punctuated by the Jake brake of a passing diesel engine on the Mass Pike, a gentle albeit noticeable reminder that the partially hidden enclave is, in fact, in the midst of a bustling town. One of my favorite pieces was entitled, Puerta, by local artist Gene Montez Florez, a slab of weathered Corten steel that gives way in the middle — via a vertical break — and allows for a glimpse either into or out of the art space depending on the viewer’s location. This welcome shift in perspective, on the edge of the property, is thought provoking for its being at once a barrier and an invitation to enter — both literally and figuratively.

My 10-year-old remarked, “[This is] a magnificent place where sculptures loom over you in a beautiful landscape with wildflowers galore,” noting the outcropping of lilacs and rough, unmowed patches that were rife with wild thyme, garlic mustard and coltsfoot. “Humans can interact with nature but there are things that are man-made which is what our

Turn Park Art Space was conceived and founded by Igor Gomberg and Katya Brezgunova as an art space and a place for exploration by both children and adults. The park, a collaborative project designed by Moscow-based architect Alexander Konstantinov and New York/Massachusetts architect Grigori Fateyev, will showcase contemporary architecture and sculpture as well as ongoing art exhibitions and temporary installations. A program of live music, contemporary theater and performance is also planned for the park, and later stages of the project will include site-specific children’s playgrounds and pavilions that house a gallery, a restaurant, a gift shop, and a floating dock. For more information visit www.turnpark.com.