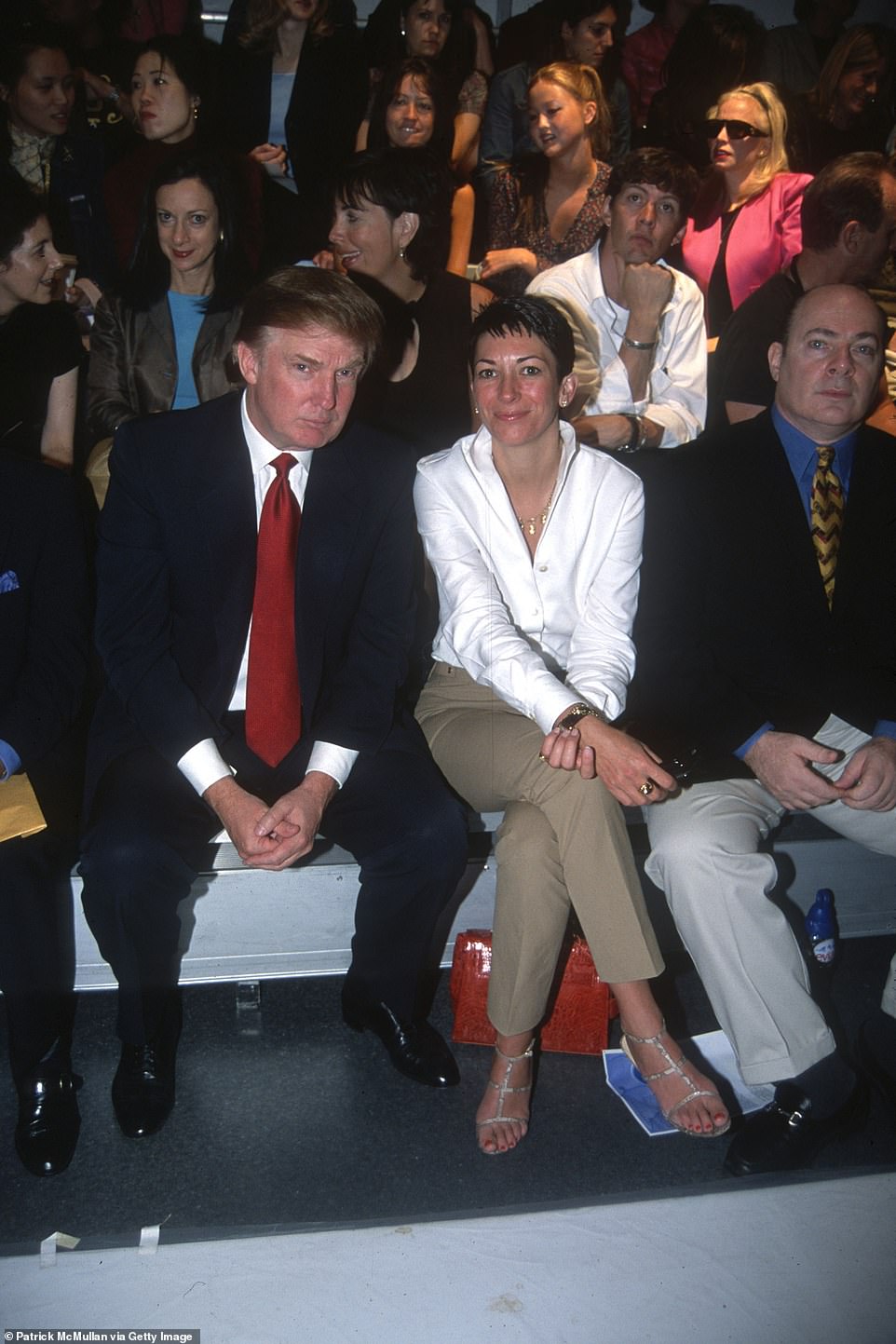 It’s been so long since I spent a day glued to breaking news in eager and optimistic anticipation (though there was that day Fiona Hill testified.) But taken all together, the thousands of shards of terrible news that have broken over my psyche the past three and a half years, the big and small tales of cruelty, deceit, stupidity, ignorance, bigotry and greed which I subject myself to first thing in the morning — because, you know, masochism — have surely taken years off my life. I certainly blame them for what’s happening to my neck and upper arms.

Yesterday, however, my Irish eyes were smiling as they flitted between my new and old best friends in high and low places, from the New York Times to the New York Post, from the Boston Globe to the Daily Mail, from PBS to Twitter to Facebook. I fed an insatiable hunger for information on the arrest of Ghislaine Maxwell, my Public Enemy No. 1 this past year. She is the daughter of a British publisher, a successful socialite who scored the best seats at Chelsea Clinton’s wedding and fashion shows with Donald Trump and, as laid out in yesterday’s indictment, accomplice to Jeffrey Epstein’s procurement of underage and vulnerable girls for sexual abuse.

One year ago this week, I published an essay about Epstein’s arrest at Teterboro airport on his way back from his residence in Paris, and called it “Just the Suggestion of Justice Is Making My Week.”

Since then, I have consumed every podcast and documentary on Epstein. It’s the same stuff reiterated, so I’m not quite sure why I keep listening and watching, except that he pushes my hottest fury buttons. His vilest crime was the one he got the most help with from the men whose job it was to represent the welfare of the people. A dozen lawyers in Florida, both his defense team and the prosecutors, let Epstein plead guilty to “soliciting prostitution.” Those lawyers let him transform 13- and 14-year-old girls walking home from school into hookers-in-waiting.

But it’s a story with a beginning and middle but no end because, of course, he died. Justice, in Epstein’s case, ended up just a bold suggestion, just a lofty goal to strive for in some alternate, much better universe, like “We hold these truths to be self-evident, that all men are created equal.” After his death (by suicide or, as most everyone Twitter seems to think, by government-sent thugs) in August of last year, I assumed that all hope for justice had died with him, and that the most egregious #MeToo perpetrator’s failure to be called to account would signal the end of the movement.

I thought we’d also seen the last of Ghislaine Maxwell then, too. She’d slipped out of camera range years before. The internet kept recycling the same party circuit images of her over and over again whenever some Epstein-adjacent famous person was in the news, like Bill Clinton, Prince Andrew, Alan Dershowitz or, sometimes, Donald Trump, because she wanted it that way. Women like her, and men like Epstein, get exactly what they want.

I thought that one day many years from now, I’d read of Ghislaine Maxwell’s timely death somewhere inside a gated community in the Maldives, Bermuda or Swiss Alps, where her obituary would say something like, “She never spoke again of her relationship with Epstein and, in fact, won several defamation suits against British tabloids in the ‘20s and ‘30s.” Her role in turning children into prostitutes in the eyes of the law would never be officially acknowledged.

No one knew where she was. Then I heard a rumor that she was hiding in Israel. Then I saw a photo of her at an In-N-Out Burger in Los Angeles, which may or may not have been doctored. I read that the ocean protection organization she founded in 2012, the Terra Mar Project, had been dissolved. This was in December 2019, just about the time, it turns out, she was purchasing a $1 million home on 156 acres in tiny Bradford, New Hampshire, under a legal entity she’d just created — Granite Realty LLC — in order to keep her name off the sales documents. Packages were sent there under the name G Max. (I’m guessing a savvy FedEx deliverer helped deliver her into our hands, and I can’t wait for the podcast.)

Either, like Epstein, her sense of privilege is so extravagant she didn’t think she could ever be caught, or she’s a crappy fugitive. Though she apparently had assets in excess of $20 million, was free to travel anywhere she liked, and there are 75 countries on earth that do not have an extradition treaty with the United States, Ghislaine Maxwell inexplicably chose to hole up just a few hundred miles north of the rooms where some of it happened. The FBI didn’t even have to expend a whole tank of gas to swoop down on “Tucked Away,” her 156-acre estate at 338 East Washington Road early Thursday morning and quietly arrest her.

The perjury charges stem from testimony she gave in 2016 when she claimed to be unaware of having interacted with any underage girls, except one 17-year old, and replied, “I don’t know what you’re talking about,” to the question, “Did Jeffrey Epstein have a scheme to recruit underage girls for sexual massages. If you know.”

There’s something beautiful about the word “perjury,” isn’t there? It feels like the perfect antidote to “I don’t know what you’re talking about.”

Friday morning, the day after nearly 56,000 new COVID-19 cases were reported nationwide, yet another video surfaced of yet another white woman pointing a gun at yet another unarmed black person and it became clear to me that no one in charge has the creative drive to get children back to school in September, I’d like to hang my hope hat on the possibility that justice might yet be served for the dozens of women whose lives were stained by Jeffrey Epstein and his enablers. I want to believe that our system is not so broken that it can’t deliver at least a modicum of closure to them.

But my faith in us is badly damaged. I imagine there are, as I write, dozens of lawyers vying to represent Ghislaine Maxwell, stepping over each other for the chance to grab that spotlight and all that money and defend all that privilege. Does anyone believe she can’t beat this rap? We’re so broken.

On Independence Day this year, I confess I’m not sure what there is to celebrate about us. On some lawns, a row of American flags looks like Confederate flags. The president doesn’t find the deaths of 120,000 Americans important enough to mention, but he’s got a lot to say about the proposed removal of monuments to slavery. I must return to the idea of the USA, if not the reality of her, so I went looking for a hero to offset the evils that Maxwell and Epstein were perpetrating 25 years ago. I found one. While they were using their privilege to abuse susceptible teenagers, another woman was using her complete absence of privilege to save them.

Oseola McCarty was a black washerwoman born in Mississippi in 1908. She outlived all her relatives. In 1995, four years before her death, despite not knowing the definition of “philanthropy,” she gave away every penny she’d ever saved — $150,000 — to support scholarships for poor students at the University of Southern Mississippi. She didn’t want to have to work as hard as she had. Her generosity inspired the general public to contribute more than a third of a million dollars toward the same cause, and Ted Turner to give away $1 billion. Before her death in 1999, she got to fly on a plane and stay in a hotel for the first time. She received an honorary doctorate from Harvard, the Presidential Citizens Medal, and got to carry the Olympic torch in 1996. People treated her like a monument to love, but she didn’t want any monument built in her name.

That was a paragraph to help us remember what Oseola McCarty was doing 25 years ago, and what unthinkable courage and goodness our country has bred and can still breed today. Happy Fourth of July.