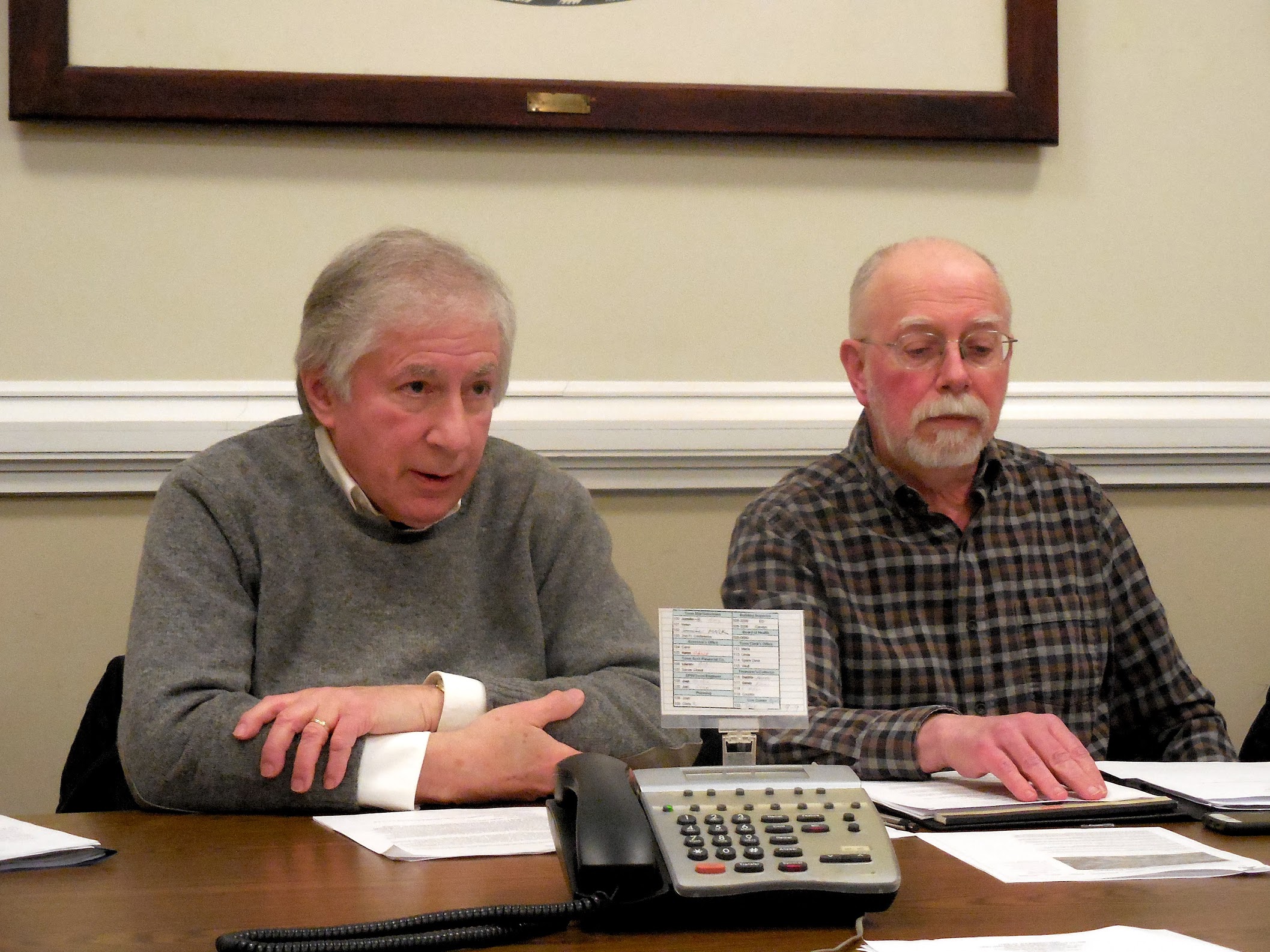 At a Feb. 6 meeting, Great Barrington Affordable Housing Trust member Jonathan Katz, left, apologizes to members of the audience of lack of communication about the trust's plans for affordable housing on North Plain Road. At right is Chairman Bill Cooke. Photo: Terry Cowgill

Great Barrington — It was a night to make amends and set the record straight.

The Great Barrington Affordable Housing Trust had a dialogue Feb. 6 with neighbors who are concerned about the trust’s plans to purchase a plot of land on North Plain Road on which 30 units of affordable housing would be built.

At a separate meeting last month, neighbors and abutters were visibly angry that they were not notified of the plans and instead learned of them by word of mouth. Last week, two members of the trust, John Katz and Garfield Reed, apologized to the neighbors for the oversight.

“I wanted to apologize … for my failure to go out and ask questions to the folks in Housatonic and for failing to go door to door to let you know what the project on the Alden property entails,” Reed, who himself grew up in low-income housing, told the 25 or so people who filled the selectboard meeting room at Town Hall. “I hope not to make that mistake again.”

See video below of a discussion of the Affordable Housing Trust on Feb. 6 concerning plans for the Alden property:

“This is our first step in getting the views of all of you,” Katz added. “We’re very serious about that.”

At a Jan. 6 meeting of the Community Preservation Committee, about 50 people packed the fire station meeting room to ask some tough questions about the trust’s application to the committee for $200,000 to purchase 7.25 acres, known as the Alden property, on North Plain Road near the intersection with Housatonic’s Main Street. At that time, most were angry at not being consulted in advance.

Before the CPC could even discuss the proposal, former selectboard member Dan Bailly and his brother Jim got into a shouting match with the committee concerning lack of notice from the CPC and the housing trust to the 21 abutting property owners about the proposal. Later that night, the CPC approved the funding anyway.

Trust member Fred Clark drafted a request for proposals to potential developers (click here to read it) and members of the audience raised more questions about the project. But this time around there was less emotion and the questions were more substantive.

Bailly raised questions about infrastructure to the property, including the extension of a sewer line that would have to travel from Main Street across North Plain Road to the proposed development. Bailly also wanted to know what made the Alden property so desirable and whether the trust had considered other properties.

Bailly also wanted to know about access to and from the development, including sidewalks, crosswalks, storm run-off and the necessity of a traffic study. Bailly and others wanted to know who the developer would be, who would be managing the property, what the tax impact would be, and whether the trust had studied whether there were enough unfilled jobs in the area to support the number of people expected to live on the property.

See video below of a Feb. 6 question-and-answer session between the trust and members of the audience:

Members of the trust, including Chairman Bill Cooke, had to tell members of the audience that they did not have answers for all of their questions because the project was in the early stages. Besides, the CPC’s recommendation for funding the purchase of the property was subject to a vote of taxpayers at the annual town meeting in May.

If approved, the town wouldn’t close on the property until July. If taxpayers rejected the funding, then there would be no project at all, or the trust would have to identify another site.

Cooke explained that it was sort of a chicken-and-egg problem. The trust could not answer most of the questions until it had site control and hired a developer to work out the details.

Clark suggested that the project be limited to owner-occupied single- and multi-family dwellings, in part because the trust could partner with Central Berkshire Habitat For Humanity. Indeed, Carolyn Valli, the CBHFH executive director, was at the meeting to answer questions about procedure.

If the proposal is funded at town meeting, then the housing trust would meet again, hire a developer, come up with a specific proposal and go through the permitting process, which would include public hearings before town bodies such as the planning board for subdivision and site plan approval. Abutters would be notified of any public hearings.

Cooke said the proposed affordable units on the Alden property would likely be for tenants making 100 percent of the area median income, which is a little more than $78,000 per year for a family of four.

In addition to the possible trust proposal, there are 45 more planned for 100 Bridge Street and another 40 to 50 at 910 Main Street in the town’s smart growth overlay district. Both of those projects are being developed by the Community Development Corporation of South Berkshire as rental units. When completed, the CDC units should put Great Barrington above the 10 percent minimum, Rembold said.