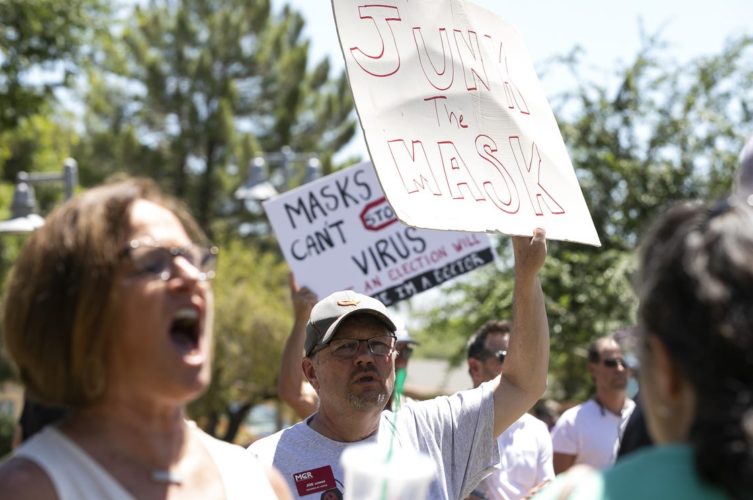 Protesters gather for the ‘Unmask Us’ demonstration against mandatory mask wearing in Scottsdale, Arizona, on June 24, 2020. Photo: Catherine Rafferty, The Republic

Washington — Like a fractured, dissonant orchestra, the Trump Administration’s pandemic response has badly needed a conductor to pull it together. Now and then the President has stepped  forward to sing random tunes: “Soon the virus will just disappear like magic”; “the virus is a hoax,” “our testing is the envy of the world,” and “hydroxychloroquine is good – I’ve heard a lot of stories.” There has been no coordinated federal leadership.

Although recently he appears to have changed his mind about masks, for the last four months the President has egged on his base to view mask requirements as violations of precious American liberties rather than as a simple way to stop viral spread.

Amplifying Trump’s anti-mask message has been the Fox News trio of Carlson, Hannity, and Ingraham, who have conveyed to their viewers, in the words of a Media Matters’ analyst, that mask use is ineffective and part of a conspiracy by Democrats and the media to keep Americans living in fear and under their control.

The sad coda to the symphony is, of course, that the U.S. has more coronavirus cases from the pandemic than any other country in the world. 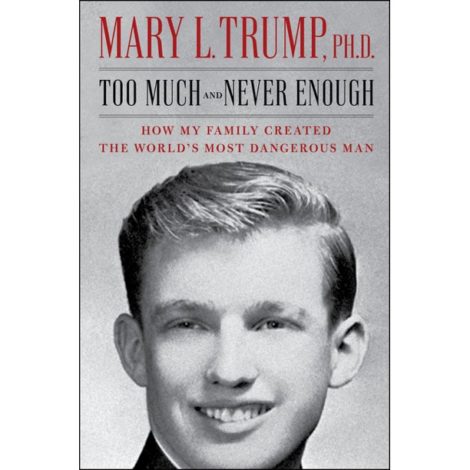 Mary Trump’s new book, Too Much and Never Enough: How My Family Created the World’s Most Dangerous Man, reveals that her grandfather, Donald’s father Fred wanted more than anything for his sons to grow up to be “killers.”

Donald has now literally fulfilled his father’s dream, dodging responsibility for leadership during the coronavirus pandemic and sabotaging state and local leaders by trivializing the deadly potential of the virus. He has undermined the science experts and bullied states into reopening their economies far too early, before scientific benchmarks had been met.

The nonprofit group Public Citizen mounted an electronic “Death Clock” poster in New York’s Times Square in April. They took it to Tulsa for the June 20 Trump campaign event, and to Washington DC for the Fourth of July, driving it past the White House, Trump International Hotel and Black Lives Matter Plaza.

Public Citizen wanted to spread the word that Trump was advised as early as January that measures should be taken to stop the spread of the coronavirus and that, if mitigation efforts had been taken earlier rather than not until mid-March, 77,000 covid-19 deaths would have been prevented.

As the coronavirus took hold in the country, Trump’s early reaction of poo-pooing the threat posed by the virus gave way in March and April to a routine of daily televised briefings from the White House Coronavirus Task Force.

But the President was prone to ad-libbing at these briefings. After his suggestion that bodily injection of disinfectants might neutralize the coronavirus was met with widespread ridicule and alarm, Trump abruptly ended the daily televised briefings and took a different tack.

Protestors – some of them armed – were attempting to roll back the quarantine in Michigan and other states. Turning to the familiar turf of the culture wars, Trump tweeted calls for governors to “LIBERATE” their citizens from shut-down requirements.

With the President on their side telling them that state governments shouldn’t restrict their freedom, protesters were validated   All over the country, Trump’s base heard the dog-whistle tweets, saw that the President refused to wear masks, and believed that coronavirus was yet another liberal hoax.

And after all, things were trending up.  On March 24, the President said he wanted the country “opened up and just raring to go again by Easter.”

Mary Trump pointed out in her book that young Donald was taught to see the world with what she saw as “toxic positivity.” Indeed, the President has seemed incapable of understanding the devastating effect of the coronavirus on families and communities.

As Maureen Dowd said, “Every day, Trump wakes up and constructs an alternative universe where his crowds are bigger, his poll results are better, the virus is evaporating, the testing is fantastic, it’s totally safe for kids to go back to school, and he’s doing the greatest job of any president in history.

Whether the President’s “liberate” refrain was motivated by toxic positivity or a reflex desire to rile up his base, protestors began harassing the state and local health directors who imposed distancing, mask and quarantine restrictions.

In Alameda County, laid-off employees put signs – “financially destroyed families and businesses,” “a-**** doctor” on the lawn of one Alameda County, California physician and health officer.

In many states, public meetings have devolved into screaming attacks against mask requirements.

At a June Palm Beach County Department of Health meeting to discuss mandatory mask use, a slew of anti-maskers included an enraged woman whose rant has been watched more than 6 million times on YouTube. After telling the commissioners that they were part of the deep state, she said “Every single one of you has a smirk behind your mask but every one of you is going to get punished by God.”

After the Palm Beach Health Commissioners made mask-wearing mandatory, four citizens promptly sued the Department on the grounds that a mask requirement deprived them of their liberty and their constitutional rights.

Survival At Home, a survival and preparedness website, analyzed over 150,000 geotagged Twitter posts that referenced popular hashtags like #burnyourmask and #iwillnotcomply to come up with the states that are most resistant to masks. Florida, Nevada, Idaho, Maine and Arizona were found to have the most anti-mask activity.

In early July, a viral video showed an Arizona woman shouting expletives and destroying a mask display at a Target store.

Not surprisingly, Arizona’s positive test rate for COVID-19 was, for several weeks, the highest of any state.

Facing virulent harassment, dozens of state and city public health officers have resigned. Would the rage against them have been unleashed if their health messaging had been supported by the President rather than undermined by him?

Now, the United States has the greatest number of reported coronavirus cases in the world.

American citizens are in the company of Russians, Iranians and Brazilians as part of the “do not fly” group that are not allowed into European Union countries.

It didn’t have to be this way. How did Italy, Spain, Germany, and France manage to get the virus under control?

Messaging in European countries was about science and evidence – not politics. Masking, for instance, was not about personal freedom, but rather about people curbing the virus and staying well by simply keeping their respiratory droplets away from each other.

And unlike the United States, the European countries did not jump the gun on reopening their economies. Rather, they kept consistently requiring the behaviors that prevent contagion – quarantines, distancing, masks, hand hygiene — until the virus was contained in particular communities and scientific benchmarks had been met.

When their citizens chaffed at restrictions, as they indeed did, city and regional law enforcement officials enforced compliance by imposing fines on violators. Leaders modeled safe behavior by complying with mask and distancing requirements.

The one silver lining to the bungled, politicized and ultimately tragic White House response to the pandemic is that many Americans who once appeared to forgive the President for virtually everything he has ever done are no longer quite so forgiving.

The President appears to have belatedly accepted masks. But whether the anger and resentment against reasonable restrictions that he unleashed in April can now be redirected and contained remains to be seen.

The polls are finally ticking toward accountability for the remarkably botched response that has led us to the point of 4 million cases of coronavirus and nearly 144,000 American deaths.  In November, voters will judge Trump on his leadership during this deadly crisis.