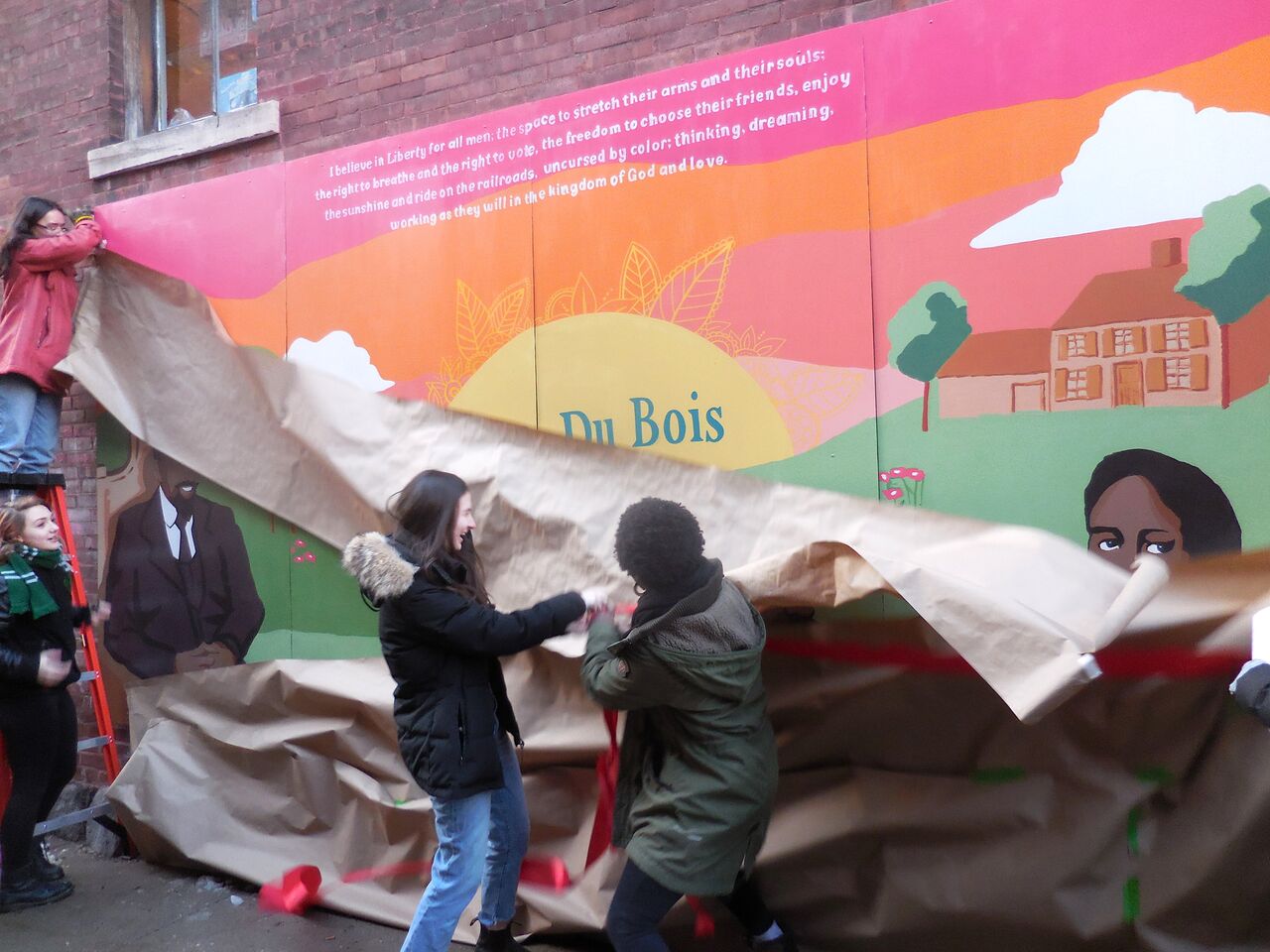 Great Barrington — The month-long celebration of the 150th birthday of W.E.B. Du Bois kicked off Thursday (Jan. 18) with a trifecta: the opening of an exhibit of the famous African-American scholar in the Mason Library, the unveiling of an alley mural celebrating his life, and a reading about Du Bois by young writers.

The birthday events for Great Barrington’s most famous native son seem to signal a newfound appreciation of the civil rights leader, who had not been fully embraced by the community because of his sometimes-controversial past.

For the uninitiated, nowhere is there a better place to start to learn more about Du Bois than the exhibit set up by library staff and Randy Weinstein, who founded the Du Bois Center at Great Barrington.

About 75 people turned out in the Mason Library to view the exhibit and to hear from organizers and dignitaries. There were books on display–some about Du Bois and others authored by him. There were posters with interesting facts. There were photos and documents.

One of the most interesting and rarely mentioned documents is a letter Du Bois wrote in 1961 to President John F. Kennedy advising stronger action on the civil rights front. This was when, at the age of 93, Du Bois had returned to Great Barrington to bury his daughter, Yolande, in the Mahaiwe Cemetery.

Du Bois felt Kennedy owed black people a bolder approach since, “Some of us cast our vote impelled by the hope your words generated, and guided by the fact that we cannot live as formerly.”

“He probably did it one night in a fit of something and then he put it away in a desk drawer and it was never published or sent to Kennedy,” Weinstein said. “I’m not 93 years old but if I were, what a haul that would be to come from New York City with my daughter, bury her and then go off to Ghana and write an encyclopedia.”

Whitney Battle-Baptiste, director of the W.E.B. Du Bois Center at UMass Amherst and a Du Bois scholar, told attendees that, during the week of Martin Luther King Jr.’s birthday, “it’s important that we understand Du Bois’ role as kind of an architect of the civil rights movement.”

See video below taken by Terry Cowgill of those who spoke in the Mason Library:

Du Bois and his legacy have had a long and complicated relationship with the town and with the overwhelmingly white Berkshires. Some are wary of his anti-capitalist views and his embrace of communism late in life.

There was an effort in 1968 to create a Du Bois memorial at the Du Bois Boyhood Homesite at what is now the known as the W.E.B. Du Bois National Historic Site in Great Barrington. The effort, ultimately successful, nonetheless divided the public and sparked great controversy in the news media both locally and nationally. The John Birch Society, the American Legion, and the Daughters of the American Revolution had bitterly opposed the creation of the park.

In a later incident that garnered much publicity, the Berkshire Hills Regional School Committee in 2004 declined to name after Du Bois one of the two new schools it had built. The new elementary school was named instead after a small watercourse, the Muddy Brook, that runs behind the building on Monument Valley Road.

The decision sparked outrage in the community, with one school committee member calling it a “media circus.” But as the Du Bois Center’s website makes clear, “There are at least five public schools named for Du Bois in multiple states, including California, Maryland, New York, North Carolina, and Ohio. His face and name twice appeared on United States postage stamps.”

Battle-Baptiste made reference to President Donald Trump’s recent crude and insensitive remarks about immigrants from Africa and the Caribbean nations, including Haiti. She called Trump’s words “a couple of interesting comments by the president.”

“The exhibit talks about his life and his larger contributions,” Battle-Baptiste explained. “Du Bois’ father was born and raised in Haiti.”

One student from Bard College at Simon’s Rock, Coco Raymond, recently completed a research project on Du Bois and spoke of how thrilled she was to use the resources of the exhibit and of the Du Bois Center.

“This is an amazing trove of artifacts and primary source documents,” Raymond said. “I really hope you all can take the time to appreciate this and how really wonderful these artifacts are.”

From the Mason Library, the action moved across the street to the unveiling of a mural honoring Du Bois that was designed and painted by the Railroad Street Youth Project. The mural essentially replaced one that was painted about 15 years ago–and repainted seven years later–on the south-facing cinderblock wall of Carr Hardware, but was removed in 2012 when the company had to perform renovation work on the building.

Years in the making, the new mural is located on a wall in the alleyway between Railroad Street and the parking lot behind the Barrington House. The project had the full support of local businessman Richard Stanley, who owns both the alleyway and the Triplex Cinema, where the student readings were held a few minutes later in the cinema’s screening room.

Theresa Russell, a Railroad Street intern, read a statement explaining the design and thanking those who helped make the project a reality. The mural, whose theme was connecting Du Bois’ life to Great Barrington, was painted by youth and community members with the Railroad Street Youth Project, led by Zufan Bazzano and Sophie Shron. Click here to read Russell’s remarks.

“This mural is part of a much larger movement in Great Barrington to honor Du Bois — from the pole banners to the birthday festival itself,” Russell said. “We are proud to be a part of the Du Bois 150th Festival and legacy.”

Russell explained that the designers of the mural selected the colors of a Berkshire sunrise “because Du Bois was deeply moved by the natural beauty here and we wanted the mural to liven up public spaces, especially in the winter.”

The mural also depicts several of Du Bois’ family members, including Burghart (his son who died as an infant) and Nina Gomer Du Bois (his first wife with whom he has two children), because “they deeply inspired him,” Russell said.

The afternoon concluded in the Triplex with several students from schools in the Berkshires–public and private–reading poetry and prose concerning Du Bois and, more generally, the topics of racism and social justice.

See video below of the students readers courtesy of RSYP Director Timpane:

The celebration of Du Bois 150th birthday includes a month’s worth of events and activities. Click here to see the calendar of events.