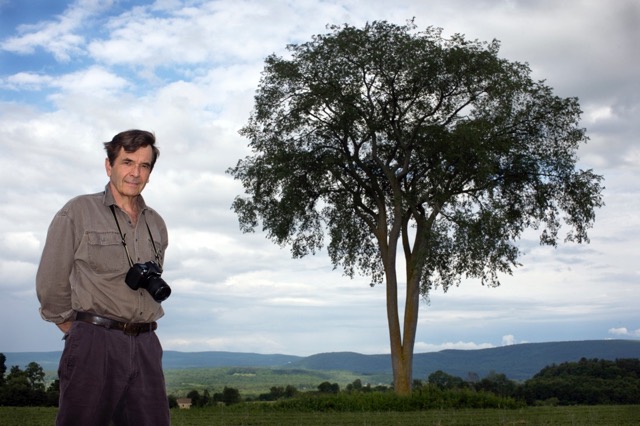 Great Barrington — Not many people know that Canaan, Connecticut-based photographer Tom Zetterstrom is also a Berkshires conservationist. His recent exhibition featuring more than 40 years of tree photographs was a hit at the recently opened Lisa Vollmer Photography Inc. featuring editorial and commercial photography, across from Haven restaurant off Stockbridge Road.

Zetterstrom’s “Portraits of Trees” series will now travel to shows in Hartford in September, and in Old Lyme, Connecticut, in October.

“They do exhibit a sort of reverence to the subject,” Zetterstrom said of his photographs. “A tree is a subject of beauty but it also has what might be seen as a kind of natural intelligence. I am trying to portray that beauty and that intelligence”.

Zetterstrom is perhaps most well known for helping to preserve the American elms in Great Barrington and surrounding areas. Zetterstrom and many others worked to save these trees from Dutch elm disease, a fungal infection that wiped out nearly 75 percent of American elms nationwide.

With a few other conservationists, Zetterstrom began a nonprofit organization called Elm Watch, which operates under the umbrella of the Berkshire Taconic Community Foundation. The organization is dedicated to saving local American elms. Most notably, Elm Watch treated local elms with a macroinjection of the fungicide Arbotect, providing the elms with three years of protection from the disease.

The famous American elm on Baldwin Hill was the group’s first patient, followed by the elm in front of Great Barrington’s Town Hall. This summer three local elms will be injected, including the beloved Baldwin Hill elm.

Elm Watch also facilitated the “adoption” of local elms, encouraging both private and corporate donors to fund the triennial Arbotect injections that keep the trees safe.

Zetterstrom said that Elm Watch has drawn attention to the troubled species. “We were the inspiration and initial incentive that inspired that work,” Zetterstrom said. He said it was also important to note that “any large elm that you see in the region is 99 percent likely to be under some injection program.”

His photography demonstrates his passion for the trees. His series “Portraits of Trees” was in the Vollmer gallery for close to two months and featured trees from all over the country, and nearly all the photographs taken used medium-format film negatives. The photographs are black and white with low contrast, giving them a sense of mystery and wonder.

“I’m an interesting blend of a fine arts photographer and community forester,” Zetterstrom told the Edge. He says both aspects of his work have “simultaneously influenced the other.”

The photographs have a soft composition and contrast, with a heavy focus on the subject. “I am part of the artistic romantic tradition in the aesthetic of my work, but also in the philosophy of reverence for nature that the tradition embodied,” Zetterstrom said. “I do emerge from the Henry David Thoreau camp of high regard for nature.”