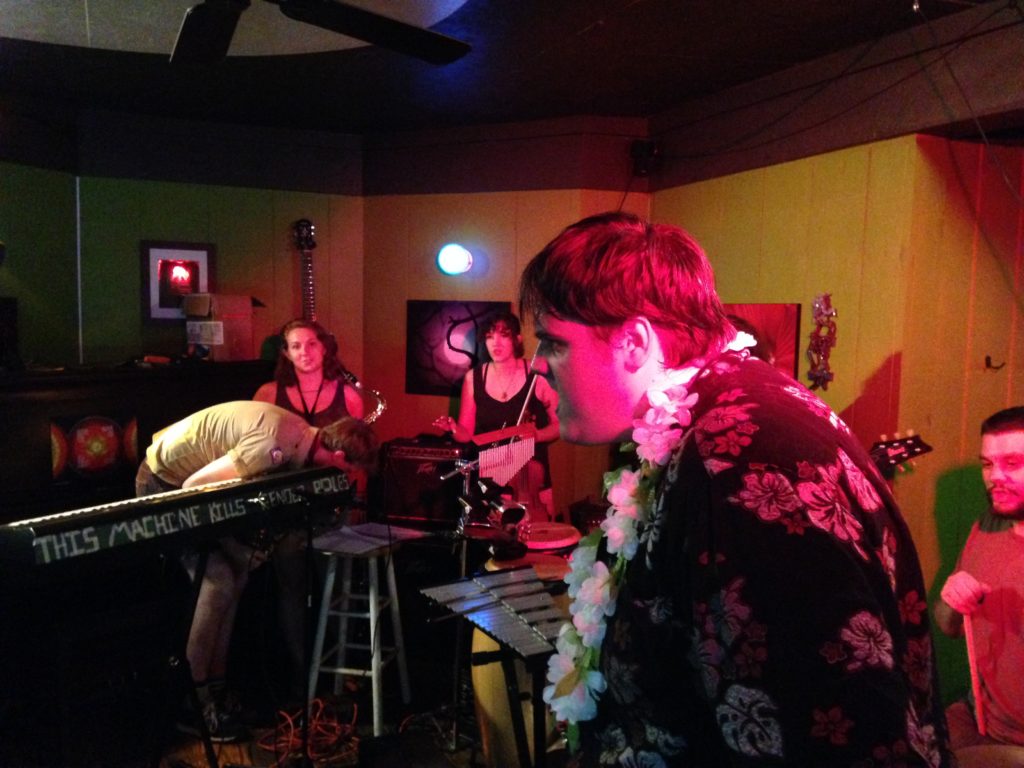 Simon Brown
Ed Cormac of the Hill Haints, in performance at The Parlor in North Adams.

Traveling with the music underground

“You guys were great. The first two bands sucked, but you were great,” intoned the woman who sounded like she had been smoking a carton a day for the last three years.

Unfortunately, I was in the second band, and when she realized this, it made her think. I enjoy making people think. It’s part of art. After a while, she said, “Your voice was very good.” She did not buy a T-shirt.

The show Saturday at the Parlor (Ashland Street, North Adams) was a spectacle beheld by about 50 people, mostly MCLA freshmen and band members (about half and half). Most of them just stared in awe, wonder, and confusion, wondering the eternal question when seeing new music: “Is this good?”

The question permeates deep into the soul of the local group, Hill Haints. Ed Cormac, their chief operator, is beyond doubt a gentleman, a perfectly sarcastic human being. Last week, I backed into his car, only to find that the huge scrape on the bumper, which hung on for dear life, was not caused by me. He is also hanging on for dear life: the Hill Haints have had a rotating cast of characters, one that could be called “Hurricane Ed.”

As the opening act that night, it was hard not to love their drummer’s child-sized snare, which was the size of a small bowl. They certainly suffered from poor sound; usually Ed’s vocals are echoed in a spooky, garage-band effect. There is vision behind the muddled mess that is the Hill Haints, but it’s not a Jehovah’s Witness. It will not come to your door, asking if you’ve heard of their lord and savior, Ed Cormac.

The Leafies You Gave Me were not well received, at first. A few minutes in, someone shouted, “Play some rock n’ roll!” The “is this good?” circuit was hard at work in most members of the audience; the nine musicians compressed into the small stage encompassed keyboard, xylophone, violin, guitar, bass, saxophone, hand drums, possibly a clarinet, a drum set, and two actor/vocalists. They squawked, banged and clanged their way through several Seussian numbers before the bar crowd was forced to stop blathering and pay attention.

“Shhhhhh… Shhhhhh…” was the only sound, as the two front men squared off. Matt O’Leary, a frail guy, faced off Chris Condreau, an enormous mound of flesh and vocal cords in a ski mask. The two stood frozen in a shootout stance, and the audience was hushed: “BAM” went a gunshot and Matt fell to the floor, dead. The crowd was sold.

We pre-gamed with Super Mario 3, which is conveniently located in the lounge area of the Parlor. We died again and again while eating fantastic vegan salads and screaming at the television. Our performance was frenetic; we played a few notches faster than normal. Most of what I remember is locking eyes with MCLA students sitting at their tables like deer in the lights of a monster truck. I could have invited them up, along for the ride, but it felt right to just flatten them. We played much too loudly for the tiny, reflective room, something my left ear is still telling me, by way of a very high E flat that is slowly going away. Why they stayed I don’t know. Jon told me he heard a recording and his guitar was out of tune the entire time. They kept cheering, though, so we kept going.

Our computer, along with about a month of recordings, was stolen from my apartment in Pittsfield last Tuesday. The backup disk was not working, apparently, and we lost a lot of work. I tell you this because, despite the loss, we are still determined to have our CD release party on the 19th of this month. We’re re-recording everything. And if you happen to see a 2007 Macbook Pro put up for sale in the last week or two, please let us know.

— Mark Twain
Read next: Promenade to celebrate the season